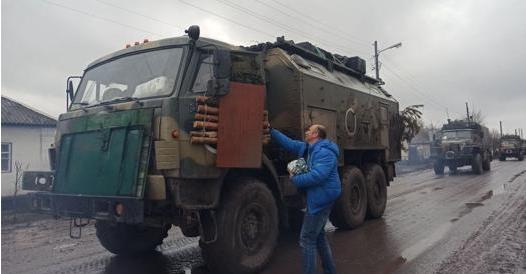 the “creative” solutions used by Ukraine and Russia in battle- Corriere.it

Vladimir Putin talks about super weapons, but it does not always correspond to what is seen in Ukraine. In fact, on the battlefield there is everything: novelties such as drone-kamikaze, traditional equipment, but also simple and effective solutions.

The acronym indicates the American 155 mm gun sent in a hurry to Kiev. Towable, it has a range of 18 miles, served by 10 men and is usually part of a battery of at least six pieces. If the soldiers are well trained they can pull 4 shots per minute. The Americans have promised over a hundred and believe the resistance will eventually have half a dozen battalions. Its accuracy increases with the use of specific radars (several have been guaranteed).

Extensive use of drones, in particular the Chinese DJI, conceived not only for military purposes: prices vary from 450 to 1,000 euros each and are used for reconnaissance and advance discovery of small nuclei. There is a second type, the professional one, with thermal chambers and centimeter precision which allows to guide the artillery fire. In addition they have the possibility of having channels on the remote control for release devices (grenades, bombs): for this second option, prices vary from 4,000 to 6,000 euros. Among the peculiarities of the Ukrainian army there is also a unit made up of drone operators and special forces members, 30 men who, riding quads, carry out ambushes against the Russian columns, which have been very effective especially in the first phase, in the Kiev area. The drone operators come from Aerorozvidka, an aerial reconnaissance unit created in 2014 by a group of volunteer electronics engineers to assist Ukrainian forces, funded through crowdfunding. They strike mostly at night, using visors, sniper rifles, remotely triggered mines and drones with thermal vision cameras.

The photos show small vehicles, born for civilian use, which have been converted by the resistance into a war role. Usually they are 2-seater, they have a missile on the frame with which to engage the tanks. They allow mobility, hide easily in vegetation, sometimes they have camouflage tarps. The commandos strike from a distance and move away avoiding any response. During the first phase of the conflict they participated in raids against the invading columns.

The Russians are employing cruise missiles and other ground-to-ground missiles. Devices to often destroy industrial structures, barracks, railways. In some cases, however, they have relied on free-fall bombs that do not guarantee any accuracy. Western analyzes emphasize how they have difficulty in centering moving vehicles, due to a lack of adequate systems and tactics. The opposite of what was seen in the campaign against the Islamic State, where Western fighters have exposed their arsenal. Many incinerated pickups, as well as the motorbikes of the jihadists. Another weak point of the Army – again according to NATO sources – are the maps available, considered outdated as some would date back to the 70s.

In conflicts we adapt. And the invaders tried to do so to protect the logistics trucks, which were relentlessly targeted. A remedy carried out in progress demonstrating how they have not prepared themselves. Wooden crates, sandbags, rudimentary armor were placed to wrap the vehicles. Moreover, others in the past have also arranged in this way. The Americans in Vietnam and Iraq, the Filipinos in Marawi, the Mexican narcos. Numerous tanks were equipped with a metal cage placed to cover the turret: a trick to contain the effects of Javelin anti-tank missiles that swoop down from above. An umbrella with holes in it.

It is still the images that tell. The resistance found Maxim machine guns in some depots, those of the First World War. Pro-Russian militiamen wielded Pps machine guns, born in the mid-1940s, recognizable by the drum magazine. Mosint Nagant rifles are used on the other barricade, in the hands of some marksman. The Ukrainian special forces then transformed the classic Kalashnikov in a new version, the Malyuk. And in any case, not a few vehicles of those promised by NATO to Zelensky were kept in reserve. the case of the elderly M113 armored vehicles and some models of Polish or Slovak origin. Without forgetting the Soviet-designed T-72 tanks, present in large numbers on all fronts. Some governments find ways to placing outdated systems to obtain more modern weapons in exchange from NATO.

Russia would be using some dolphins to protect the base of Sevastopol, in the Black Sea, against the risk of infiltration by divers. The satellite images show two floating fences placed at the entrance to the port: the Navy would have installed them in February, in conjunction with the preparations for the invasion. THE mammals can be used to locate bombs but also to counter the presence of raiders. The US Navy has also developed a similar program for some time, always for the purpose of interdiction, the same choice as Israel and North Korea. Moscow has continued its use since the Soviet era – underlines the expert Hi Sutton – and had a unit in Kazachya Bukhta, near Sevastopol: with the collapse of the USSR, the program passed into the hands of Ukraine, then after the annexation of Crimea returned to the Russians. Who have resumed the training of mammals.