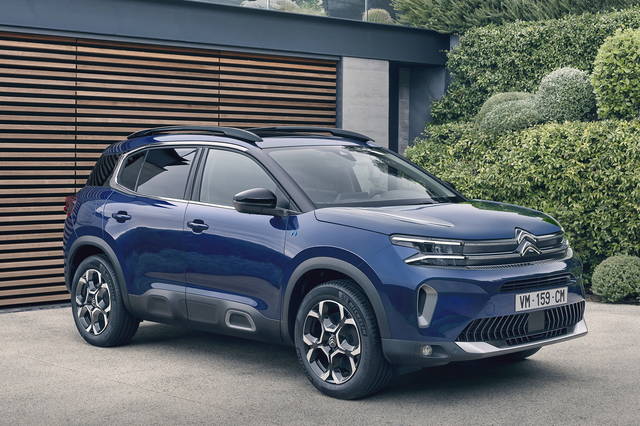 The Citroën C5 Aircross is renewed

IT’S TIME FOR UPDATES – Four years after the debut there Citroën C5 Aircross undergoes a mid-career restyling. The midsize crossover was a successful model for the French company, having registered over 260,000 units delivered, but to remain competitive in this sector of the market, so full of fierce competitors, it must renew.

NEW STYLE – The aesthetic novelties of the Citroën C5 Aircross they are mainly concentrated in the front, which is substantially revised compared to the pre-restyled version. The grille now has a more harmonious appearance. The large Citroën logo in the center is finished in black with chrome edges: two stripes start from it, formed by vertical bars that are ever closer together, which visually unite the LED daytime running lights. The fascia has also been redesigned and now has a more gritty design, thanks to the side air intakes and that of the radiator at the bottom. At the rear we find the lights with a different internal design to accentuate the three-dimensionality. There is also a new body color, which is called Eclipse Blue (in the pictures), as well as four color combinations for the air intakes and plastic side bands (which the house defines as Airbump), which do not undergo any changes. The ground clearance of 230 mm is also unchanged.

MAGAZINE DASHBOARD – The restyling of the Citroën C5 Aircross it also affects the passenger compartment. The French manufacturer redesigned the central part of the dashboard to make room for the installation of a new multimedia system with a 10 ”screen. Solution that led to repositioning the air vents under the screen itself (previously they were on the sides and of a different shape). Cars equipped with automatic transmission lose the previous lever in favor of buttons for selecting the gears. The driving mode selector is also located on the central tunnel.

MORE COMFORTABLE SEATS – The Citroën C5 Aircross can also benefit from the latest generation Citroën Advanced Comfort seats, already used by the C4 and C5 X, made with high-density foam for the padding, also available with heated, massage function and with Alcantara upholstery. Those who sit behind the wheel are faced with a 12.3 “digital instrument panel that provides all driving information and can count on 20 assistance systems, including Highway Driver Assist, a level 2 ADAS that combines the regulator active speed limit with Stop & Go function with active lane departure warning.