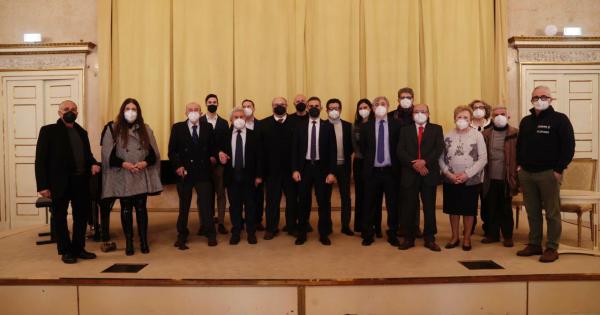 The ceremony gets underway: it starts with the awards ceremony – Look at the gallery – Photo 1 of 3

To open and conduct the ceremony is the president of the city council Tassi Carboni: Two difficult years have passed but we have adapted to the situations and needs. We resisted. After greeting the authorities and the mayors of the municipalities of the province, Tassi Carboni wanted to thank the Regio theater, the Verdi choir, Arte at a distance, the ceremonial and communication office of the Municipality.
The first guest to take the stage is Bishop Enrico Solmi who is accompanied by the mayor Federico Pizzarotti. Solmi recalled the figure of Ilario da Poitier.

Then it is the turn of the certificates of civic merit. The first in Agugiaro and Figna, withdrawn by Alberto Figna. Then it is the turn of the Parma Anti-Violence Center, withdrawn by the president Samuela Frigeri. Then Carmine Giovanni Del Rossi was awarded followed by Intercral Parma Aps represented by the president Mauro Pinardi. Another certificate at Lenz Foundation with Maria Federica Maestri and Francesco Pititto. Then Raimondo Meli Lupi di Soragna collects the prize destined for him followed by Zacmi Zanichelli represented by Caterina Zanichelli and Giorgio Boselli.

The awards end with the two gold medals at Parma Baseball, represented by Massimo Fochi, Sebastiano and Zanguido Poma, and at the Volunteer Service Center represented by the president Elena Dondi and the director Arnaldo Conforti.

After the awards, a musical performance and then the long-awaited last speech by Federico Pizzarotti as mayor of Parma. After the usual thanks to citizens and authorities, the mayor entered the heart of his speech.
“St. Hilary’s day is the most important day because it puts the city at the center – he said -. Two years ago we were all about the growth of nations. Parma had become the capital of culture. Then the world was overwhelmed and today the battle against the virus is not over yet. We are in the deep heart of the change but it is the season of great occasions “.