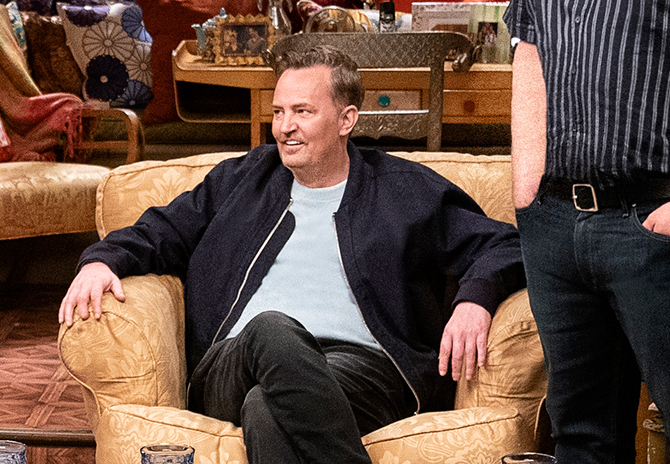 In the chapter dedicated to the reunion of Friends they talk about everything … except one thing. The six protagonists remember, share, cry and laugh, giving us a nostalgic feast full of anecdotes. Yet in many sequences of tears and emotion an elephant is perceived in the room. A huge one that stomps in each scene Matthew Perry seems to speak sadly and his companions look at him attentively, but seriously.

Already from the promotional trailer we noticed the actor responsible for playing the sarcastic joker Chandler with a halo of sadness, and many of us came to believe that it could be due to the connection that exists between the sitcom and his memories against addictions.

However, the subject is never discussed or mentioned. But it is present through camouflaged references.

I confess I was hoping Matthew Perry would get wet. And not because of the media morbid of a confession on camera, but rather so that he used the platform to enhance his recovery. Especially when he himself has confessed that he does not remember the recordings of seasons 3 to 6 because of the mental fog he suffered (he consumed alcohol and vicodin). However, he appeared at the reunion dragging his words due to dental treatment, but raising so many questions about his health that at times he became the protagonist for the wrong reason.

It is true that the six are older (us too) and a “little” retouched. However, once we get over the shock of seeing them so old and together again, we begin to detect personalities and feelings. Jennifer Aniston does not stop crying, Lisa Kudrow shines with her naturalness, Courteney Cox is the most serious, David Schwimmer is full of anecdotes and Matt LeBlanc is a walking joke. While Matthew Perry represents melancholy, showing himself very far from the joker that he was long ago. And so, the shadow of the past constantly flies overhead, hoping to emerge at some point. And he manages to do it, although not explicitly speaking.

When the six sit down for an interview, James Corden asks them if they’ve had contact in the 17 years since the end of the sitcom. We found that they only met once, that the girls often see each other but that everyone is in contact in other ways. They assure that they are a family and that each of them always answers the phone when someone calls. However, at that moment Matthew Perry assures that he is not called by anyone.

In theory it is supposed to be a joke, and although his companions laugh with little grace, no one corrects him. Later, he confesses for the first time that he used to suffer from sweating and panic when the audience attending the recordings live did not laugh at his jokes. What “I felt like I was going to die if they didn’t laugh ” So what “I felt it every night “. His classmates listen to him and Lisa Kudrow confirms that he had never told them, that they did not know.

And I confess that that confession led me directly to connect her with her years battling addiction. The actor said in interviews in the past that he never went to work under the influence, but there is something about that fear of exposure and not living up to the public that leads me to ask if it could be related to the secret that he kept for years before the audience. Maybe it’s my thing, but I have the feeling that there must be a few of us who feel a certain connection between that revelation and those years of personal battle.

In turn, and at another time, Perry says that the same thing happens to everyone when they are at an event or gala. That it doesn’t matter who they attended, but if they bump into one of them they push it all away to spend time together and catch up. Matthew Perry tells it with a very beautiful contained emotion, announcing that he is about to cry, while his companions remain silent and look at him with compassion. Jennifer Aniston even comforts him.

Also, seeing the episode and the problems in the actor’s speech, I couldn’t help wondering what his classmates might have thought. That is, if we take into account that they more than anyone would be aware of the media impact that a reunion between the six supposes, having also lived with Matthew Perry their problems those years on the set, have they worried about the repercussion that it could have that the actor had speech difficulties? I think so. What’s more, I have the feeling that I slurred my words after an emergency surgery at the dentist (as explained by a source to The Sun), he could have put his classmates in the position of masking the past by talking about beautiful things and preventing the elephant from entering the shot.

However, the elephant never comes out explicitly but does fly through moments camouflaged in confessions, sadness and nostalgia. I think it’s just a matter of paying attention.