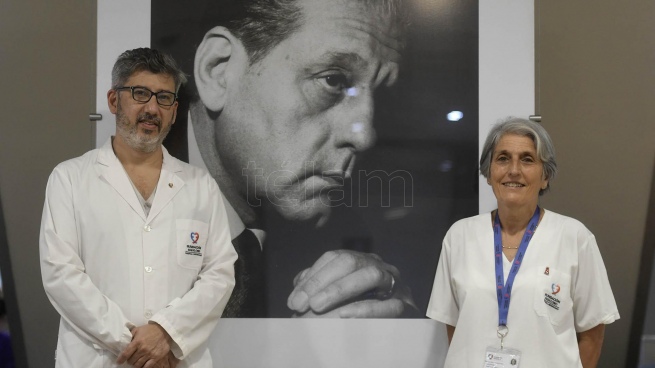 The bypass, the technique created by Favaloro that improved the lives of millions of patients

55 years after the first bypass, the technique developed by the Argentine doctor René Favaloro, which is still valid today and saving “countless lives”, changed the history of coronary heart diseaseone of the “main scourges” in health, according to cardiologists from that Foundation.

On May 9, 1967, in the American city of Cleveland, a 51-year-old woman was operated on by the emblematic cardiologist applying, for the first time, a technique that revolutionized cardiovascular surgery: the aortocoronary bypass, later considered one of the “400 most important inventions in the history of mankind” on Google’s cultural platform.

“Bypass changed the history of coronary heart disease, improving the quality of life of patients of this pathology, which is one of the main scourges that we human beings have”, expressed the Head of Cardiovascular and Thoracic Surgery of the Favaloro Foundation, Alejandro Bertolotti, former student and colleague of the renowned doctor.

“It had an immeasurable impact on medicine, it has really saved countless lives affected by cardiovascular diseases, which are the main cause of mortality in Argentina and the world,” added the cardiologist.

For its part, the president of the foundation and niece of the doctor, Liliana Favaloro, recalled that, in the 1960s, patients “died from coronary disease” given the “minimum therapeutic resources” available. In this context, the development of coronary bypass surgery “decreased death and improved the life expectancy and quality of life of patients,” said the cardiologist, who considered this technique “a before and after” in the treatment of illness.

“Even more: generously, Favaloro did not hesitate to make his technique available for all surgeons in the world to use.“Said Bertolotti about the doctor, for whom technology and advances “only made sense when they reached everyone.”

In this sense, both professionals highlighted the humanism that characterized him and the empathy with the patient and his family for which he always struggled and which are also part of this discovery.

The bypass technique or myocardial revascularization surgery consists of a special treatment for coronary artery disease, which causes a decrease in the blood flow that these arteries, which are “the most important in the heart”, take to the heart muscle.

“What Dr. Favaloro designed is to assemble a bridge (bypass) so that the blood passes over the diseased part of the coronary artery and reaches the other sideconnecting the healthy part of the artery with the aorta,” explained the cardiologist.

And he expanded: “This was done using the saphenous vein that we have in the leg, from which a portion can be extracted without affecting the circulation in the extremity, and it made the blood enter through this new communication and blood reaches the the coronary”.

With this, he continued, “preventable” symptoms of the disease, including chest pain, shortness of breath and agitation, and even heart attackswhile increasing the quality and time of life of patients with severe disease, assured the specialist, with more than three decades of experience.

Beyond the introduction of certain technological advances, the concept of surgery “is still valid and is always the same”, and is also applied to other parts of the body. “This was a milestone that earned him worldwide recognition and for which, currently, he continues to be well remembered and recognized”, assured Bertolotti.

A life devoted to health

the famous surgeon was born on July 12, 1923 in the “El Mondongo” neighborhood of the city of La Plata and from an early age he showed his compelling desire to be a doctor.

In 1949 he graduated from the Faculty of Medical Sciences of the National University of La Plata and, shortly after, He went to Jacinto Arauz, a small rural town in La Pampa, to substitute for the only doctor in town. The replacement, which would be for a few months, lasted 12 years, hinting at “a deep social commitment” early on.

After that experience, in the 1960s, he decided to travel to Cleveland to specialize in cardiovascular surgery together with prominent local health professionals and it was there that Favaloro put his ideas into practice for the first time in May 1967, in an intervention that turned out to be “the fundamental work of his career”.

In 1971 he returned to Argentina and four years later created the Favaloro Foundation, where “more than 13,000 cardiovascular surgeries have already been performed, of which 30% were bypasses.”

“The Foundation transcends internationally due to its high prestige, medical excellence and scientific research that has been sustained over time, always with the commitment to continue fighting for decent health for all,” said Dr. Favaloro, adding about her uncle: ” The greatest legacy (he left) is that of honesty, solidarity and the fight for the dignity of man.”