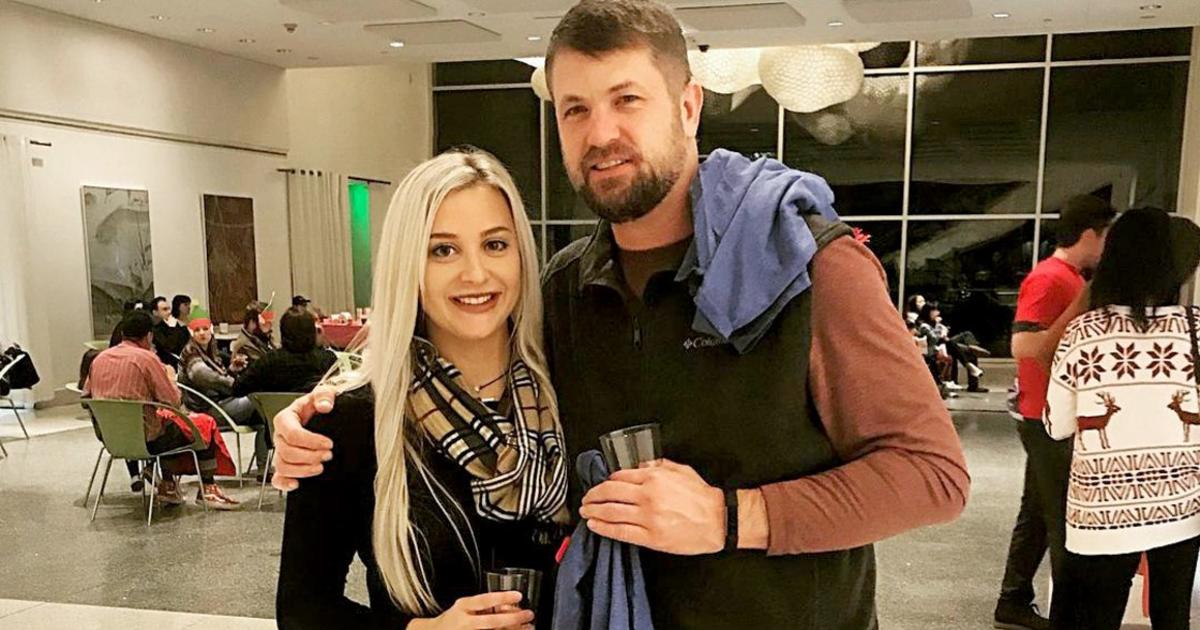 One night in February 2019, a 31-year-old woman was rushed to an emergency room in a suburb of Birmingham, Alabama, with a gunshot wound to her right arm.

“He shot me,” Megan Montgomery told doctors, according to a report obtained exclusively by NBC News, Telemundo’s sister network. “He” was her husband, a local police officer named Jason McIntosh.

The police took the gun from her husband. Nine months later, the state’s main law enforcement agency returned it to him, despite pending charges of domestic violence and an active restraining order. Just 16 days later, he used the gun to shoot and kill his wife.

Montgomery’s loved ones were devastated when they lost a devoted daughter and sister, a marketer with a passion for rescuing animals. They were shocked that NBC News recently told them that the state had returned the gun he used to kill her to her alleged abuser.

“So a restraining order prohibits him from ‘contacting, calling, texting, harassing, stalking,’ but oh by the way, can he have a gun? It’s ridiculous,” said his mother, Susann Montgomery-Clark. .

Even the lawyer for the alleged killer was surprised that he had recovered his gun. “In my opinion, it was irrational, illogical and unwise to do so”, said Tommy Spina, who emphasized that he was not excusing his client’s actions. Spina said that without the firearm, “what happened that night would not have happened.”

Women whose domestic abusers have access to a firearm are five times more likely to be shot and killed, according to research funded by the Department of Justice.

After three decades of declines in the cases of women killed by their partners with firearms, deaths have been increasing since 2013, according to an analysis of FBI data by Northeastern University criminologist James Alan Fox.

In 2019, the most recent year for which data is available, 964 women were shot and killed by their partners, compared to 211 men and women who died that year in mass shootings. That means a woman murdered by her partner every nine hours.

Although federal law and many state statutes prohibit domestic abusers from possessing a firearm when there is a domestic violence restraining order, few states actually take their weapons away or keep them away from the abusers once a warrant is issued. restriction. Alabama has such a law, but domestic abusers often end up keeping their guns.

Experts say the reason is a combination of prioritizing the right to bear arms by judges and other officials, the lack of a procedure for confiscating weapons, and the lack of awareness on the part of the police about how deadly the risk can be.

READ  Incidence below 50 for the first time since October, but Berlin is not loosening up - BZ Berlin

Allison Dearing is the executive director of the One Place Metro Alabama Family Justice Center in Birmingham, which provides services to victims of domestic violence. Seven women, including Montgomery, were shot and killed by their partners in Jefferson County in 2019.

“We know it’s predictable and avoidable,” he said, “but we still don’t treat it that way.”

Megan Montgomery did almost everything that experts say needs to be done to get away from a domestic abuser, and she still died.

How it all happened

Montgomery posted dozens of happy photos on Instagram. But behind the scenes their relationship had become volatile, her mother explained. She told NBC News that she remembers Montgomery calling to ask for a pickup because she was stranded in a Walmart parking lot after an argument with McIntosh. “We talked to her about it,” Montgomery-Clark said, “But we didn’t know how bad things were.”

“She knew that if she left him, it would kill her,” he said.

On the night of February 23, 2019, Montgomery and McIntosh had a fight at their home. Colleagues from McIntosh’s department responded to a 911 call from McIntosh, who said Montgomery had a gunshot wound.

Montgomery said he had grabbed McIntosh’s service weapon for his own protection. The two of them began to struggle for the gun and Montgomery was shot in the upper right arm.

McIntosh, 6’4 “and 225 pounds, told officers he thought Montgomery had his cell phone in his hand. According to the report, McIntosh said it was only when the gun went off and the bullet hit his wife that he realized that they had been fighting over a weapon.

Because McIntosh was a police officer, the head of the Alabama Law Enforcement Agency ordered Special Agent Vince Cunningham to investigate the incident. ALEA, a state-level agency, is the standard investigative entity for police-involved shootings in Alabama.

Cunningham took the gun from McIntosh. He interviewed Montgomery on February 26, 2019. She told him that during the incident “he was scared,” according to the investigation summary written by Cunningham and obtained by NBC News.

The ALEA summary says that when Montgomery was asked if the shooting was an accident, she said yes. The summary also says that the officer who took Montgomery to the ER told Cunningham that when doctors asked Montgomery what happened, she told them, “He shot me.”

READ  Without Macri, in Together for Change they agreed to expand the coalition and establish rules for the PASO

The ALEA report does not mention a chilling 13-minute recording of a conversation between McIntosh and Montgomery that Montgomery’s attorney says he gave to the agency.

On the tape, McIntosh talks about his fascination with serial killers and how planning mass shootings was a “reassuring thought” that helped him sleep at night. He also told his wife that he had felt the need to beat her to death with a tennis racket, and if he did, he would stand next to her body and say: “Now laugh, bitch.”

The district attorney did not press charges and concluded in a letter that “there was no evidence that a felony was committed by Mcintosh or Montgomery.” The district attorney left open the possibility that the city of Hoover could file a misdemeanor against any of them. That never happened.

McIntosh resigned from Hoover’s apartment in March amid an internal affairs review of the shooting.

Montgomery did what is difficult for most victims of domestic violence. I leave. He moved in with his parents and filed a request for restraint against abuse in which he asked the court to remove McIntosh’s weapons. The judge issued a mutual restraining order to keep the couple away from each other that did not specify removing the weapons.

The order did not separate them either. On the night of May 5, the couple argued again at their home and the police were called. Once again, Hoover’s department officers responded. The police report says that McIntosh knocked Montgomery to the ground in the garage and documented an inflamed area near her ribs where she said he hit her.

Once again, Montgomery did what the experts say he had to do. He followed up with the domestic violence charges. McIntosh was arrested and released on bail. Later, he filed for divorce.

Meanwhile, McIntosh repeatedly texted ALEA Special Agent Cunningham asking for his gun to be returned, according to documents reviewed by NBC News. McIntosh claimed he needed the gun to get a new job in private security. Although he had used it as a service weapon with the Hoover Police Department, the weapon was his personal property.

Cunningham coordinated with McIntosh to meet and deliver his weapon to him on November 15, 2019, according to ALEA.

About 15 days later, on Saturday night, Montgomery was with friends at a restaurant after watching a football game.

“He put a hand on the back of his neck and another on his shoulder and told him to come out,” the publication says. “We all looked at him, asked him who he was and he said, ‘This is my wife, she’s going with me.’

The man who wrote the post said Montgomery agreed to go with McIntosh, “But the look in his eyes is one I’ll never forget.”

They left the bar together in McIntosh’s truck. They ended up seven miles in the Mountain Brook Sports Center parking lot, Mountain Brook police say.

At 4:30 the next morning, a patrol officer found Montgomery’s body face down in the parking lot. He had been shot three times.

Since the protection order existed, state prosecutors McIntosh was charged with capital murder punishable by death.

The day after Montgomery was found dead, a letter arrived at her home. His mother opened it. The letter was from the county court and said Montgomery was to appear in court on December 4 to testify in the McIntosh domestic violence case. The case had been pending since he filed charges in May.

In March 2021, McIntosh pleaded guilty to the reduced murder charge. He was sentenced to 30 years in state prison.

Nothing in the laws

An ALEA spokesperson said: “If ALEA had not returned the weapon, McIntosh could have legally purchased a firearm.”

But McIntosh’s attorney pointed out that while his client could have bought another pistol, he never did.

The ALEA spokesperson also told NBC News: “The gun was McIntosh’s personal property, the investigation was closed and ALEA had no legal justification to keep his property private. Furthermore, the restraining order did not restrict McIntosh’s access to firearms. If the weapon had been a department-issued service weapon, ALEA would have returned it to the department. “

But Alabama law specifies that no one “who is subject to a domestic abuse restraining order […] you must possess a firearm or have one in your possession or under your control. “

However, legal experts point out that there is nothing in Alabama law that requires the court to tell the person to surrender the weapons.

In the meantime, no federal data tracks how many women have been shot and killed by their partners despite a restraining order. But, Montgomery’s mother said, “Megan’s story has been repeated across this country thousands of times.”

She and her family have started a fund committed to preventing domestic violence by educating women in high school and college about the signs of abusive relationships.