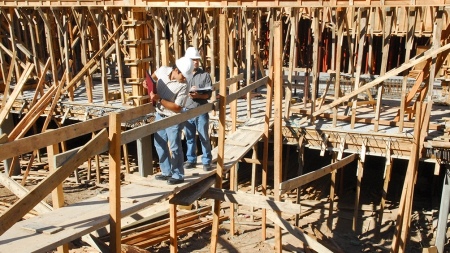 The president of the Argentine Chamber of Construction (Camarco), Gustavo Weiss, highlighted this Thursday the role “invigorating public works” and the “good levels of investment” that he had since 2020; as well as the level of employment in the sector, which is “close to historical records”.

“This government has started an important public works plan, even in the midst of a pandemic when many other economic activities were paralyzed,” Weiss said Thursday morning in dialogue with Radio 10.

“Although it is far from what the country needs due to the decades of non-investment in infrastructure, in Argentine terms it is a reasonable level of investment,” he emphasized.

For this year –Weiss anticipated- similar levels of investment in public works are expected.

“We are close to historical records, approximately 10% below, so we are at very good employment levels with close to 500,000 direct people between monthly Uocra personnel and those who are outside the agreement”

“The budget provides for an investment of 1.5% of GDP, which is later complemented by provincial budgets that increase the level,” he estimated.

One problem to solve, according to Weiss, is inflation. since the processes of redetermination of costs do not usually accompany it and this leads to lower levels of work execution.

“The year 2022 was good. A little less than the planned budget was executed, mainly due to the increase in costs that, unfortunately, the price redetermination systems do not follow, so there was less execution than desirable, although, overall, the level of execution was reasonable,” he pointed out. Weiss, and He was optimistic that “2023 will be better and the entire budget can be executed.”

See also  Al-Zawahiri's death is the lowest point in al-Qaeda's decade-long decline. The future of jihad could be local groups

The owner of the Camarco He stressed the role of public works in the economy as it is “one of the main revitalizing activities.”

“For every peso that is invested, there are three more pesos that boost the economy. Each work generates, in addition to direct jobs, an infinite number of indirect jobs due to the materials that a work includes”, he indicated.

Precisely employment in the sector showed sustained levels of growth in recent yearsas he highlighted.

“We are close to historical records, approximately 10% below, so we are at very good employment levels with close to 500,000 direct people between monthly Uocra personnel and those who are outside the agreement,” Weiss explained.

Although in recent months employment “continued to grow but at a much lower rate”Weiss recalled that “since mid-2020 it has been growing uninterrupted month by month” and “it is not possible to grow at a very high rate every month.”

The businessman avoided giving employment forecasts for this year, because this “depends a lot on investment in public and private works.”

Finally, he referred to the money laundering initiative for the investment in construction instrumented last year, which adds from this year to the purchase of used homes.

Yes ok He considered that the money laundering for construction was “far from expectations”, through which “nearly US$ 500 million joined”, which for Weiss “is an interesting figure”.

The president of Camarco explained that the laundering of used homes, despite not directly injecting capital into construction, does so indirectly.

“Obviously it energizes the sector. If there is a lot of demand for homes via money laundering, more buildings will be started over time”, he pointed out, and evaluated that “the two money launderings, both the work in progress and the finished product, help the industry”.

“I think it is important to make efforts so that those billions of dollars that are in the mattress both outside the country and inside it are used for investment,” he concluded.