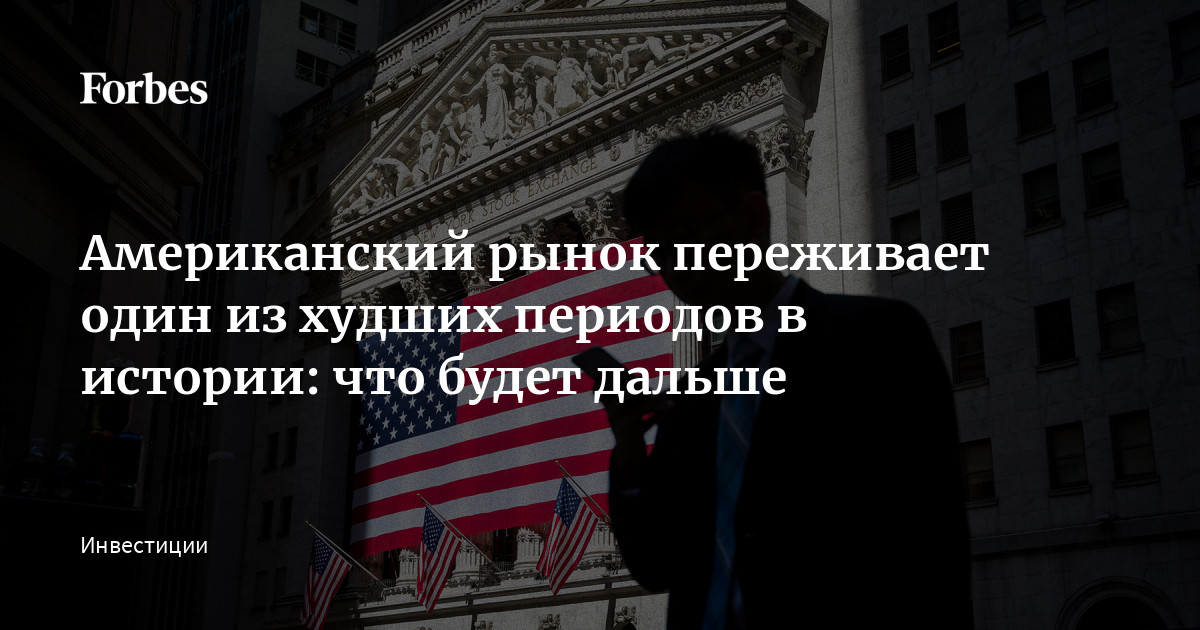 The American market is experiencing one of the worst periods in history: what will happen next

One of the worst markets since the 1930s

By June 27, the S&P 500 index, key for the US stock market, fell by 18% since the beginning of the year. For the US stock market, this is one of the worst results in history, although a slight increase in recent sessions has somewhat improved the overall picture. Without this, the performance of the index would have been the worst since 1932, that is, since the Great Depression.

By the beginning of 2022, there were no shortcomings in the alarming forecasts – experts were talking about a superbubble and comparing the situation with the one that developed shortly before the collapse of the dot-com bubble in the early 2000s. The rally in equities, fueled by direct payments to individuals, the Fed’s ultra-loose monetary policy, and a liquidity-filled quantitative easing program, continued for nearly two years. So, in 2021, the broad market index rewrote all-time highs 70 times. From March 2020 to January 2022, the S&P 500 is up 114%. However, in early 2022, the rally began to fade. At that time, inflation was fixed at its 40-year highs. The Fed, which had long viewed high inflation as a short-lived phenomenon, moved to scale down its stimulus programs and raise its base rate.

However, the regulator, which has kept the rate at near-zero levels for quite a long time, is now forced to act more quickly and decisively. At the last two meetings, the Fed raised the rate by 0.5 and 0.75 percentage points – the regulator has not taken such drastic steps for decades. At the end of the year, the rate may be at the level of 2008 – 3.25-3.5%. This caused investors to fear stagflation – a situation where an economic downturn is added to the rapid rise in prices.

Fed chief Jerome Powell has already acknowledged that a “soft landing” for the US economy – that is, curbing inflation without sliding the economy into recession – will be a very difficult task. At the last meeting in mid-June, the Fed sharply worsened its expectations for economic growth for the year (from 2.8% to 1.7%). US Treasury Secretary Janet Yellen expects a slowdown in economic growth: “Because before this the economy grew very rapidly, it, like the labor market, recovered, we have reached full employment.” However, she does not consider a recession inevitable.

However, experts are increasingly worried about a possible downturn. A Wall Street Journal poll of more than 50 economists gives a 44% chance that the US economy will enter recession. As the publication notes, such levels of confidence in a recession usually occur when the economic downturn really comes. Back in April, this probability was estimated at 28%. Among the reasons for the coming downturn, which economists name, are the increase in the Fed rate (which means more expensive loans), high inflation, problems in supply chains and high prices for raw materials caused by the situation in Ukraine. At the same time, the Fed cannot influence the last two factors through monetary policy.

As a potential recession approaches, hiring could slow down and unemployment rise, S&P Global notes. “In this scenario, the “cure” for the economy (in the form of a Fed rate hike. — Forbes) may be worse than the disease. Despite the fact that so far indicators show the stability of the economy, “there seem to be cracks in the foundation,” the authors of the S&P report said. People have learned to live with high prices, and US GDP is likely to be in positive territory in 2022 (S&P analysts predict growth of 2.4%), but 2023 is more worrying. With high prices, aggressive rate hikes that will hurt demand, and Ukraine and slower growth in China that will exacerbate supply chain problems and price pressures, the economy is unlikely to come out of 2023 unscathed, S&P concludes.

What to expect before the end of the year

“Bearish” sentiment in the market can be clearly seen in the dynamics of demand for the purchase of shares by retail investors, which in many ways were the main driving force behind the previous rally. So far, small investors have consistently “bought the bottom” and did not let the market fall. However, now the situation has changed. Last week, JPMorgan calculated that they had the biggest sell-off since September 2020. According to investment bank strategist Peng Cheng, it’s fair to say that “retail stocks have capitulated.”

See also  Moment of panic in an animal park: a 5-year-old girl bitten by a snake (video)

Despite the collapse, historical data on the dynamics of the stock market may inspire investors with optimism. Ned Davis Research’s calculations show that during years that saw a comparable drop in the S&P 500 in the first half of the year, the market rose in the second half of the year. For example, in 1932, by mid-June, the index fell by 36.9%, and by the end of the year it rose by 34.6%. Stock market analysts are also showing optimism. On average, their year-end expectations for the S&P 500, according to a June poll of Wall Street strategists by Bloomberg, are 4600 points (that is, an increase of almost 20% from today’s levels).

However, some analysts believe that the worst in the markets is yet to come. According to Morgan Stanley chief strategist Mike Wilson, one of Wall Street’s most pessimistic forecasters, the market hasn’t fully factored in the risk of a recession yet. If the US economy really shrinks, the S&P 500 could drop to 3,000 points. If the Fed manages to ensure a “soft landing” of the economy – and this is Wilson’s baseline forecast – the index may drop to the 3400-3500 area. Either way, Wilson expects continued bearish sentiment among investors until the recession becomes a fait accompli or its risks are eliminated.

Peter Oppenheimer, global equity strategist at Goldman Sachs, agrees that recession risks are not yet fully priced into stock prices. The risks of only a slight decline in US GDP are taken into account, he said. He sees the current bear market as part of the economic cycle. “Most bear markets end when the economy is still weak, but market participants have the feeling that they are no longer deteriorating at the same rate. It seems likely that markets will at least fully appreciate the risk (of an economic downturn) before we see a genuine recovery,” the analyst said in a note to clients. Analysts at RBC, focusing on the dynamics of the S & P 500 during the economic downturn in the US economy, expect that the “bottom” will come when the index falls to the 3200 area.

On a semi-annual horizon, the fall of the S&P 500 from its peak January values ​​will be 34-40%, which will mean its decline to the region of 2900-3100 points, Societe Generale analysts, who have studied 30 bear markets since 1870, draw a disappointing conclusion. According to Solomon Tadesse, head of research at the bank, the current correction for the stock market is not something atypical. Rather, the scale of the market recovery after the “covid” collapse in March 2020 was rather atypical. That boom in the market now seems excessive, and this has led to an “unsustainable bubble” that is now deflating, the analyst concludes.