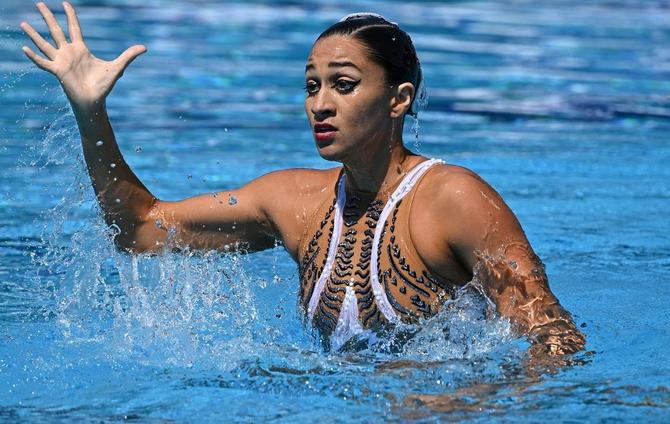 The absence of American Alvarez from the team competition

The name of Alvares was mentioned in previous versions of the list of participations with the American team, but it was replaced by Eugene Chang before the start of the competition.

An official from the International Swimming Federation (FINA) revealed that his organization had asked Alvarez to undergo a full medical examination on Friday, but said he did not know the result.

Alvarez, 25, was dramatically rescued from the bottom of the pool on Wednesday by her Spanish coach Andrea Fuentes, after she drowned and was unable to breathe during her performance in the freestyle singles final.

And Alvarez expressed her shock at the pictures published by Agence France-Presse showing her unconscious, before deeming her “beautiful, in a way.”

“At first, I was shocked, I didn’t expect to publish something like this,” she told the Spanish daily El Pais.

“But then, I looked at it from the bright side. I now find the pictures to be beautiful in a way. Seeing myself calm, at peace, and seeing Andrea diving and reaching out to try to perceive me as a superhero.”

The pictures, which were taken by a robot placed at the bottom of the pelvis, were published by many media outlets.

The American added, “Sometimes the quietest place in the world is under the water: when you sit under silently. You feel light and focused on yourself. Sometimes I need this moment. In the pictures, things look very natural.”

For her part, Fuentes, the former world champion, explained the moments of the accident, “It was terrifying. I had to jump because the rescuers did not do that.”

Fuentes, 39, dived in her shorts and shirt to the bottom of the pool and pulled Alvares to the surface before being helped to the edge of the pool.

Alvarez was carried on a stretcher to the facility’s medical center where her teammates and fans appeared in shock, while her team said she fainted due to the effort expended during her performance.

Alvarez, who is participating in the world championships for the third time, also fainted during the Olympic qualifiers in Barcelona last year.

In another interview, Fuentes criticized the slow reaction of the lifeguards at the World Championships, which ends on July 2, after nearly two weeks of competition.

“I think she was at least two minutes without breathing because her lungs were full of water,” she said. “But we managed to get her to a good place. She vomited water and coughed, but it was very scary.”

“When I saw her drowning, I looked at the rescuers but I saw that they were shocked. They did not react. I said to myself ‘Are you going to dive?’ I reacted quickly and told myself I couldn’t watch.”

“I didn’t think about it, I jumped. I think it was the weirdest, fastest free dive I’ve ever done in my career. I picked it up and lifted it, it was heavy, it wasn’t easy.”