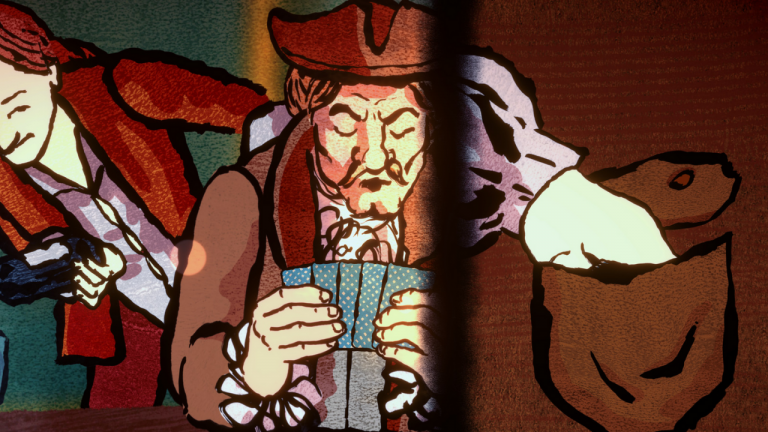 As every week, we offer you an overview of the releases to come over the next seven days on the side of the indie sphere.

A card game rooted in 18th century Europe, Card Shark has the particularity of inviting you to cheat to reach the table of the King of France. To achieve this, you will therefore have to use real techniques developed by the Count of Saint-Germain in his “Memoirs Without Words”. It’s up to you to handle the cards and mini-games properly to unlock new places, generate more earnings and reach your goal. A frankly convincing experience during our preview: “Beyond very good qualities: its writing, its artistic direction or its very concept (making the player an expert in cheating in 18th century France) Card Shark seems – after our four hours of play – to succeed in an even more mad.“

A horrifying visual novel, CORPSE FACTORY sets its scene in Tokyo, where rumors are rife about a strange site that allows you to claim someone’s death with a simple photo. Corpse Girl indeed makes it possible to put a snapshot of a person online. Once this image is sent, the site promises its death within days. And then as if by chance, the assassinations multiply in the city. Panic spreads through the town, with would-be Corpse Girl victims even receiving a photograph of their own corpse, along with a prescient date. The player is then tasked with thwarting death and this macabre ritual.

An adventure/marine exploration game that will inevitably recall the Playdead experiences, Silt offers you to dive into 2D settings. Our diver seems to be able to transpose his consciousness into other living beings to get out of different situations. Alone in the seabed, he will have to cross the abyss in search of forgotten mysteries. The hero travels through underwater ruins and ancient fallen mechanical structures while discovering the local fauna, creatures that have evolved in quite particular ways. Some of them are likely to be quite hostile.

Launched on Kickstarter, Ashina: The Red Witch is a pixel-art adventure game that invites you to join Ash in the journey of an afterlife. In a world of spirits filled with strange creatures, the heroine must find her way home and above all save her sister “powers that be“. On the gameplay side, it should essentially be about solving puzzles using surrounding objects and following dialogues in order to advance the story. Note in this regard that the game will not be available in French at the release. A prologue is offered to you free of charge on the platform Steam.

A 2D action/platform game, Souldiers asks you to fight for your freedom in a fantastic and colorful universe. It depicts the souls of fallen warriors forced to follow a Valkyrie who arrives out of nowhere. You will be asked to choose between three classes: warrior, archer or mage. Each has different abilities and gameplay, in addition to a dedicated skill tree. The player explores vast environments, solves puzzles and fights against opponents in intense combat. The preview of the title was rather attractive: “After a few hours in the company of Souldiers, it’s hard not to be enthusiastic about this action-platformer developed by the Retro Forge studio. Almost everything is impeccable.“

See also  Pokémon Legends Arceus: A revolution made to last?

Tower defense and dungeon-crawler composed of RPG elements, Dwerve puts you in the shoes of a young dwarf handyman. The protagonist’s mission is to travel to the underground ruins and unearth turrets, traps and other lost technologies in order to fend off the evil witch Vandra and her minions. The latter have a plan to conquer the lands of the surface. The underground kingdom is also full of secrets and puzzles that you can solve. It will be possible to improve Turrets and Parts: each tree has its own branch of improvements. Finally it will be necessary to show strategy to thwart the bosses who stand in front of you.