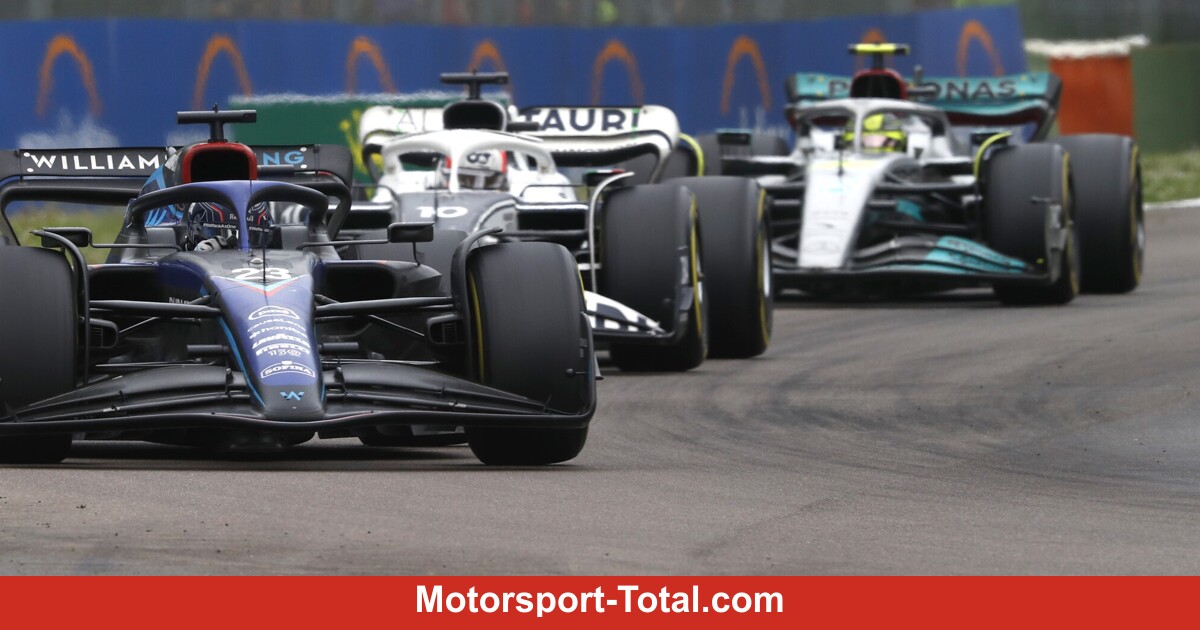 (Motorsport-Total.com) – Lewis Hamilton can now probably trace the rear wing of the AlphaTauri AT03 with his eyes closed. Because in the 2022 Emilia-Romagna Grand Prix at Imola, Mercedes driver Hamilton spent two-thirds of the race right behind Pierre Gasly, always close but never close enough to attempt an overtake.

But why did Hamilton never manage to overtake Gasly? Mercedes’ senior racing engineer Andrew Shovlin refers to the so-called DRS train and says: If there are several vehicles in a row, all of which can use the adjustable rear wing, the effect for those driving behind fizzles out.

The effect in Imola would actually be quite effective, says Shovlin: “Together with the slipstream, you gain around half a second there compared to the car in front.”

In the DRS train, the advantage is “destroyed”

But because Gasly drove so close behind Williams man Alexander Albon that he also benefited from DRS, Hamilton’s DRS advantage was “destroyed”, according to Shovlin.

“He and Gasly were going almost equally on the straights and Lewis wasn’t able to get alongside him so he was stuck in that position for the entire race and that’s rather frustrating.”

Could Hamilton have taken more risks?

Could Mercedes have previously strategically realigned Hamilton’s race, having started from P14? When changing from intermediates to dry tires, for example, Hamilton did not pit immediately, but only two laps after the first slicks changer Daniel Ricciardo on McLaren. So did you miss an opportunity here?

Shovlin says: “Looking back you always know better, then of course we would have done it.”

However, they decided against it because the Mercedes W13 “didn’t warm up the tires well over the entire weekend in Imola,” says Shovlin. “We still have to discuss the reasons for this.”

Hamilton is limited by the Mercedes

This special feature of the Silver Arrow made the team refrain from conducting an experiment with Hamilton, in which the important thing is to get the dry tires up to temperature quickly.

“These are conditions in which Lewis is at his best, as we know from experience. He’s very, very good in changeable weather,” says Shovlin.

“But we have a fundamental problem with the car, which is having a hard time getting the tires up to temperature. We have to solve that first before we can really risk anything in changeable conditions.”

Not everything went smoothly for Russell at Imola either

And although many things went better with George Russell’s sister car than with Hamilton and the Mercedes newcomer finished P4 in Imola, Mercedes did not remain completely error-free in Russell’s case: when changing the tires, the adjustment of the front wing failed, so that Russell was not in the second stint ideal tuning on the front axle was on the way.

How did this error come about? Shovlin has to go back a bit for his explanation: “If we adjust something during the pit stop, then we use an electronic screwdriver that we program a certain number of revolutions into.”

Mercedes’ strategic review of the Imola Grand Prix and why Lewis Hamilton didn’t finish in the top 10 there. More Formula 1 videos

“We have to do it this way because the stops have become so quick that you can no longer do it manually, for the mechanic on the front wing to count the revolutions. That’s what the tool does.”

But the tool only does this if it is used optimally. At Russell, the team suddenly encountered difficulties: “Both had screwdrivers [bei der Einfahrt des Autos] received a push from the end plates of the front wing and were set back as a result.” The planned changes could therefore not be made.

According to Shovlin, this is directly related to aerodynamic adjustments to the vehicle, specifically the end plates of the Mercedes W13. “We didn’t notice that during the practice sessions and during the pit stop exercises,” admits the race engineer.