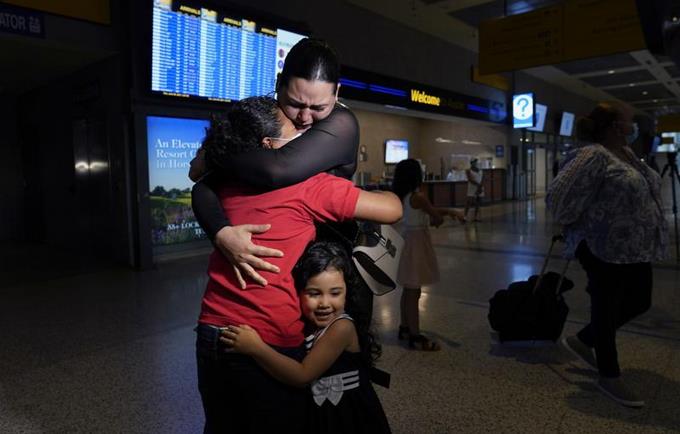 It had been six years since Glenda Valdez kissed her little daughter goodbye and left for the United States. Six years since he held the girl in his arms.

But there he was, at the Austin-Bergstrom International Airport in Texas, hugging the girl through tears. The reunion was made possible in part by a photo of Emely that he saw on television. and in part from an Associated Press story about young migrants crossing the US-Mexico border.

“I love you very much,” he said to the girl, now nine years old. “I give thanks to God”.

It was a movie ending — at least so far — for a complex story that began in Honduras, with a bad relationship, according to Valdez, who is now 26 years old.

Emely’s father did not take care of her or help with her expenses. When Valdez emigrated in search of a better life, the little girl was left in the custody of her mother. But the father took her.

Valdez said he had sporadic contacts with the girl because her father preferred that he not talk to her much. Every now and then he managed to make a video call. One day Emely told her that she had a new stepmother who did not treat her well.

Emely told her that her father, seeing that she was not happy, had decided to give her to someone, without telling whom or where. He left her in the care of an adult who helped get her to the US-Mexico border over the course of several weeks.

Border Patrol agents found Emely in La Joya, Texas, at midnight on May 12. He had been walking through bushes for six hours with a group of people he did not know and had lost a shoe in the mud. I was crying inconsolably.

“I was thirsty and there was nothing to drink. I didn’t know where we were going ”, Emely expressed on Sunday.

When the agents found her, she told them that she had lost her mother’s phone number and that she did not know where she lived.. Desperate, she gave reporters details to try to identify the mother. “He has curly hair, although he sometimes straightens it. He has a lip ring ”.

She claimed that her mother was waiting for her. Valdez, however, said he had no idea that the father had sent his daughter to the border.

Valdez was at his home in Austin, watching a Univision newscast one afternoon in May, when he saw a photo of Emely wearing a red hoodie. He knew immediately that it was his daughter. Desperate, she began calling the US authorities, the television network and refugee organizations.

“I was in shock, honestly. Imagine watching television and suddenly your daughter appears “Valdez said. “And seeing her crying, saying things that broke my heart. That she was upset, crying and all that. Seeing is his barefoot image. It was all very hard for me ”.

Emely said she was being taken to a home for minors, but Valdez said she did not know and that for weeks she received vague responses from authorities. They told him to be patient.

“I was traumatized. I cried many days watching that video, reviewing photos and crying all the time ”, Valdez expressed.

Last Wednesday he received a call saying that Emely was in a government shelter. They would see each other soon. And on Saturday they informed him that he could meet his daughter the next day at the airport. At the appointed time, she ran down an airport staircase to hug her daughter.

Emely is part of a wave of underage migrants who cross the border from Mexico alone. Almost 19,000 arrived in March, which is an unprecedented monthly figure, and about 17,200 in April (the second highest). About a third of the minors come from Honduras. It is the second highest contingent, surpassed only by Guatemalans.

Following federal guidelines and a decades-old ruling, the US Department of Health and Human Services tries to place minors “in the least restrictive environment” possible, which, in most cases, refers to a parent or child. close relative living in the United States. It took an average of 35 days to place a minor in a home towards the end of May. Emely was reunited with her mother in about 25 days.

Children are usually turned over to someone with instructions to appear for a hearing at which a judge will decide whether or not to accept their asylum claim. Final decisions can take years as the court system is overwhelmed, with 1.3 million applications pending.

Emely moved in with her mother, her husband, and two other daughters that Valdez had. The little ones were eager to meet their older sister in person, whom they knew only through video calls.

READ  Aïcha, a young migrant rescued from the waters after 22 days of drifting, surrounded by corpses

Valdez says he’s making up for lost time and making a good connection with the girl he left six years ago.

“The plan is to accept whatever God wants and be with her here,” Valdez said.

“And we will never part again. Ask God not to allow us to separate again. Give her all the love that I couldn’t give her. Everything that was lost. Give him a better future to compensate a little for everything that happened “.