After more than a year of promises, Tesla has finally made its “Full Self-Driving” pack available on subscription. Tesla owners can now access current FSD features, such as Navigate on Autopilot and automatic lane change without paying $ 10,000 all at once. The service is only available for Tesla vehicles equipped with Full Self-Driving Computer 3.0 or higher and, depending on the Autopilot package, costs $ 99 per month (vehicles with base Autopilot) or $ 199 per month ( vehicles with improved Autopilot). This is an attractive option for those who would just like to try FSD instead of purchasing the pack up front. It’s unclear if that price will see a change after the wider release of FSD Beta v9, which the company has been rolling out since last week.

The electric car maker innovates once again, this time by offering a subscription to unlock its Full Self-Driving feature. According to Tesla’s website, for a monthly fee of $ 199, customers can access the non-fully autonomous capabilities of their electric automobiles. With the Full Self-Driving (FSD) function, you will have access to a suite of more advanced driver assistance functions, designed to provide more active guidance and assisted driving under your active supervision, the company explains in its dedicated article. the subscription formula. 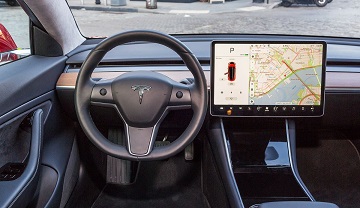 Tesla’s FSD function is currently nothing more than an advanced driving assistance system that requires the driver’s attention and makes them 100% responsible. In the FAQ part of the article, we can read: Note: These functions are designed to become more efficient over time; however, the functions currently active do not make the vehicle autonomous. The currently active functions require a fully attentive driver, who has his hands on the wheel and is ready to take over at any time.

The company is working hard to make FSD fully autonomous by relying on cameras, but it is not there yet and frankly, in regulatory statements Tesla says it might not achieve autonomous driving capability. completed this year. It should be remembered that the development of such a system could take years and then it would have to be authorized by law.

Tesla’s FSD, which was updated to version 9.0, still in beta, in early July, requires users to actively supervise driving and be ready to take back control in the blink of an eye. of it. In addition to the subscription plan, Tesla’s FSD is also available for purchase at a price of $ 10,000. Those who have an older FSD computer can upgrade it to version 3.0 in order to be able to purchase the subscription plan, but it will cost them $ 1,500. 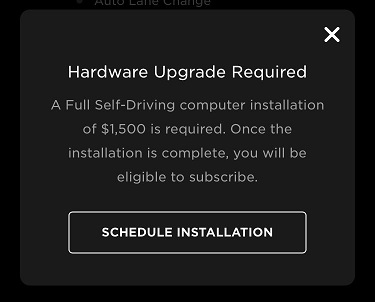 But in the end, Tesla hopes to deliver a true Level 5 Complete Autonomous Driving System and people who buy this pack are betting that Tesla will achieve that. Last year, Tesla said it was working on setting up a card subscription for its full autonomous driving offering. This would allow people to test the features without too many commitments.

Elon Musk, CEO of the company, has confirmed that Tesla plans to launch such an option towards the end of 2020. That never happened, and the CEO then pushed the release back to early 2021. In March, Musk said that is sure to happen in the second quarter of 2021. In April, the CEO said the subscription was a sure thing for May, but it didn’t happen either, and now Musk has pegged the release of the subscription option to the release of v9, which has also been delayed.

The automaker has also released a software update to its mobile app for the month of July, and while the patch notes only relate to its virtual powerhouse, it has also included a new subscription option in the tab. Tesla app “upgrade”: 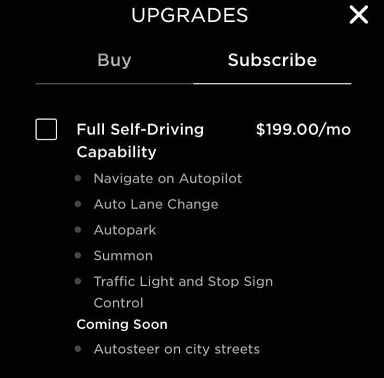 According to Electrek, Tesla described this new product in a message to owners titled “Introducing Full Self-Driving Capability Subscription”:

Upgrade your Model 3, whose VIN ends in ******, for $ 199 per month (excluding tax) to experience features such as Autopilot navigation, automatic lane changing, parking automatic, Summon and control of traffic lights and stop signs.

The functions currently active require active supervision by the driver and do not make the vehicle autonomous.

Currently, Tesla reports that the subscription update is only available for vehicles in the United States. The company also reminds that, despite its name, you really shouldn’t think of the annual feature of $ 2,388 (plus tax) as something that will actually make your car self-sufficient or at least not safe. The subscription can be canceled at any time via the mobile application.

$ 199 is cheaper than the previously announced $ 399, but it raises questions about the value of the feature, as the beta version of Tesla’s FSD pack is still capped at around 2,000 beta testers. If the approach disclosed by Tesla is to be believed, the automaker may actually increase the price once the update is released on a large scale.

Dj, some people find the price of $ 199 per month expensive for the current FSD. For $ 200 a month, I don’t want to hear “active surveillance”. For $ 200 a month, I want to hear “go ahead, take a nap,” one commentator wrote. A second commentator added, writing: Without a doubt. I’d be willing to pay $ 200 per month if they accepted 100% liability and said there should be no one in the driver’s seat. Another wants his car to pick him up at the pub for that amount and park on its own in the garage.

On Wednesday, Germany banned Tesla from repeating what a court considers to be misleading advertising statements about the capabilities of support systems for business and autonomous driving, a Munich judge ruled.

The case was brought to court by Germany’s Wettbewerbszentrale, an industry-sponsored body tasked with monitoring anti-competitive practices. The Munich court upheld the opinion of the industry body and banned Tesla Germany from including the phrases “full potential of autonomous driving” and “Autopilot included” in its German advertising material. He said the claims constituted deceptive business practices, adding that the average buyer might have the impression that the car could be driven without human intervention and might suggest that such a system is now legal on German roads.

Since level 5 autopilot and autonomous driving is currently neither legally nor technically possible for the vehicle in question, Tesla must also play by the rules of the game and must not make false advertising promises, it said in a statement. Andreas Ottoflling, a lawyer for the group.

Tesla’s Autopilot system has been the subject of criticism from regulators, including the National Transportation Safety Board in the United States, which believes it lacks guarantees. Assistance systems capable of performing driving tasks for long periods with little or no human intervention are a growing concern, as they cause drivers to neglect their obligation to be in control of their vehicle. any time.

Tesla said it informed customers that its automated driving assistance technology is not a fully autonomous driving system.

What comments do you have about Tesla’s FSD pack subscription prices? Too expensive or not bad, in your opinion?

Would you gladly subscribe to the $ 199 pack to have your autonomous Tesla for a month?

What do you think of the German body’s decision to ban Tesla’s misleading advertising statements in the country?

Tesla announces to regulators that fully autonomous cars may not be available by the end of the year, at odds with Elon Musk’s indications

Tesla is finally starting to roll out the beta 9 version of Full Self-Driving after a long delay, it brings driver monitoring and improves visualization of the road

Tesla will widely release the beta version of the “Full Self-Driving” sequel by the end of the year, starting with an extremely slow and careful rollout.

How much would you pay for autonomous driving? Volkswagen is hoping for $ 8.50 an hour, and you can also play video games while your car is charging.