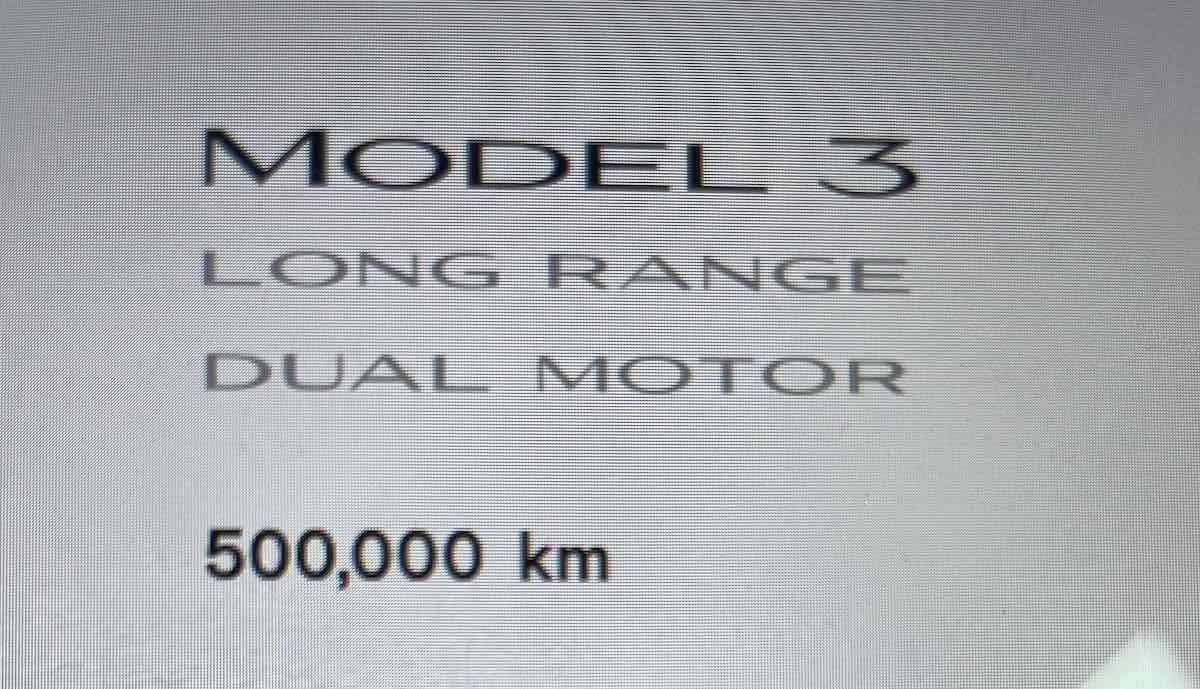 The world record for most kilometers in a Tesla is held by German Hansjörg von Gemmingen-Hornberg, who this June reported 1,609,344 (or 1 million miles) in his 2013 Model S. However, he did not drive the first of them himself, and it is uncertain whether he will still complete the personal million miles because he fell out with Tesla and recently ordered a Lucid Air. So his role as a famous and content Tesla frequent driver is vacant – and could be filled by a Canadian with a Model 3.

Because he reported this week on Twitter and Facebook that he had exceeded the 500,000 kilometer mark in his Tesla, which was delivered in October 2018. Similar to the German record holder with the Model S, he documented this with the information photographed from the screen of his Model 3 (see photo above). It also shows that it is the Long Range variant and that it is equipped with the Enhanced Autopilot software option.

Unlike von Gemmingen-Hornberg in Germany, @lovePianoBlack has not turned driving into a profession, but drives his Tesla for work: He works as a courier and drives 500 kilometers a day five days a week, 90 percent of it on highways. Speed, he informed on Twitter. With a screenshot of his Tesla app, he showed that he had obtained 51 percent of the necessary electricity at home and 49 percent from the supercharger in the past few weeks.

Original battery. Original brakes. Half a million and still have, Original 😃 pic.twitter.com/E4X79lBGie

Apparently, his electric car has undergone supercharging for 250,000 kilometers alone – even that would have far exceeded the 192,000 kilometer guarantee that Tesla gives for the Model 3 LR. The capacity limit is 70 percent. But @lovePianoBlack’s battery still has 80 percent of its original capacity, despite a total mileage of 500,000 kilometers.

The battery is just as first as the drive units and even the brakes, the Canadian Tesla frequent driver continued. So far, he has only had the wishbones and rear steering knuckles replaced at his own expense, as well as the pump for the battery cooling after 460,000 kilometers. Otherwise the car is like new. If @lovePianoBlack continues to drive as before and his Model 3 continues to do so, they would both have covered the million kilometers around spring 2026. Gemmingen received a Twitter congratulation on this status from Tesla CEO Elon Musk, albeit almost a year late.