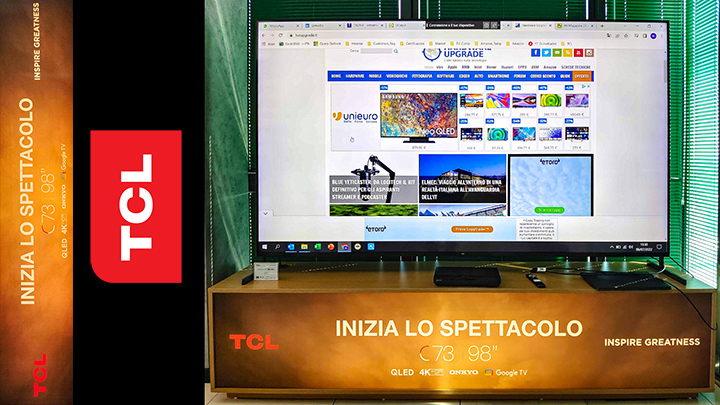 98 inches. This is the size of the largest cut of the TV TCL C73also arrived in Italy in recent days. Are they many, are they few? It is often difficult to evaluate parameters such as dimensions and yield starting from a simple number. In the case of televisions it is even more difficult, because this type of equipment is classified according to the linear measurement of the diagonal of the screen, but the visual rendering then that of thepanel area.

To make a comparison between TVs of different cuts it is therefore necessary to deduce from the diagonal, knowing theaspect ratio typical of modern televisions equal to 16: 9, the basic measurements and height and from them calculate the area of ​​the screen. In addition, once having in front of our eyes the data of the total area of ​​the display, it is difficult to associate the figure with the real yield that it then has before our eyes.

All this to say that sometimes a comparison between televisions on the mere measurement of the diagonal can be misleading. In the example in question we are talking about the colossal TV TCL C73 4K HDR da 98 polliciwhich we have recently been able to see live at the Italian headquarters of the Chinese manufacturer and on which we have also carried out some preliminary measurements in collaboration with Emidio Frattaroli of AV Magazine.

Analyzing the diagonal and the price, the first comparison that springs to mind is the one with i competitive TVs in 85-inch sizes (on the front LCD LED) e 77 inches (on the OLED front). Bigger cutson both types of technology, they go to play on price ranges double or triple compared to the aggressive price list with which the 98-inch TCL C73 arrives in Italy.

The 98-inch measurement is approximately 15% and 27% larger than the 85 and 77-inch panels, respectively. Considering that for the area the basic result for height, analyzing this data things change significantly. Still talking about linear measurements, the base of a 77-inch panel measures 1.79 meters, that of an 85-inch panel 1.98 meters, while that of a 98-inch TV exceeds two meters, with a measurement of approximately 2.17 meters.

The passage from 77 to 98 inches, the only comparison of the linear measure already gives the idea of ​​a big difference, but analyzing the area the numbers could leave many amazed. At the level of pure perception try closing your eyes and seeing a 77-inch TV in front of you. Now to it add a 21-inch PC monitor in the upper right corner. Done? Now multiply this 21-inch screen for the full height and width of the panelup to the limits of the 77-inch panel.

This little exercise in imagination makes us understand in a simple way that when we move on to talking about area, things are very different from the perception that our mind can have in the passage from 77 to 98 inches. Do you want a number?

Turning to85″compared to an inch increase of 15%, the largest 98-inch screen in area by approximately 33%. Virtually a third more. If we wanted to do the exercise above, we would go to the top right add a laptop panelalways to be multiplied by the entire height and width.

This long introduction to try to make you understand the difference in terms of impact when faced with the new 98-inch TCL C73. In our news we have always called it ‘colossal’ and actually live the perfectly apt definition.

A television that plays in the field of projectors

The rendering of a projector in the simplicity of a television. This one of the first comparisons manages to restore the visual sensation. Precisely here lies one of the interesting aspects of this new TV, the ability to go and play in the field of projectors, with the ease of use of a TV (also in terms of being able to be seen not necessarily in the dark), but with a a price that, although in the order of thousands of euros, is not equivalent to that of a car.

Given the premises, you can imagine the curiosity in putting this colossal television to the test for the first contact, with the doubt to dispel: ‘ huge, it costs less than TV of similar size, but the quality?‘

Already at first glance the very good impact, both for the characteristics of the panel and for the construction of the TV. The panel, as seen on other TVs of the C73 series, a FALD QLED LCD goes to 8 domains and guarantees high native contrast and good viewing angle. In particular, this latter characteristic is necessary for a television with such a wide diagonal, that when viewed from a close distance it sees the sides of the field of view at a certain inclination with respect to the normal to the panel.

For this first contact we concentrated, with Emidio Frattaroli of AV Magazine, on HDR measurements to quickly test the characteristics of the panel.

Very interesting is the maximum luminance peak, which even with a calibrated white point can reach more than 700 candles on a 10% area. It should be noted that that area on a 98-inch TV is practically equivalent to the screen of a ‘normal’ size TV. The high luminance is associated with a good native contrast and the TV manages the range very well, following the SMPTE ST 2084 curve in a punctual and precise way, especially in the Cinema profile.

We noticed some slight discrepancies in some samples in terms of color, but a brief chat with the TCL technical managers confirmed that the specimen on display was not equipped with the definitive software and that the technicians are working on the latest corrections on the color rendering.

See also  Shin Megami Tensei V will also have its own show in the next few days • JPGAMES.DE

The Full Array Local Dimming backlight managed on 192 areas, but we did not find obvious blooming phenomena. The sound system has 2.1 scheme with built-in subwoofer in the back of the TV and Dolby Atmos support.

Il panel able to manage flows at 120 Hz and candidate the colossal TCL C73 98 inches to become one too super immersive screen to play with the latest generation consoles. At the HDR level we find support for all major standards including HDR10+ e Dolby Vision IQ.

A television of this kind is able to play its cards well in different situations: the first of course is the positioning in a home cinema room, perhaps instead of a projector screen, but there are also different possible variations. We talked about the gaming sector, but TCL C73 98 “can also be used in the business environment, for small auditoriums, or for meeting rooms. In the latter case, the integration of the Google TV operating systemwith support for various Android apps and external devices such as webcams and in the presence of the app Google Duoallows very immersive video callsalmost as if it were ‘in presence’.

Il price of 4,999 euros absolutely high, but about a third of that generally required for a TV of this size. Of course, many could compare with the super aggressive prices of some models, Samsung in particular, in the 85 “cut, made available among various offers even for less than two thousand euros, but at this point the discourse we were making comes into play. opening on the actual difference in area between 98 “TVs and the ‘smaller’ 85” and 77 “TVs.