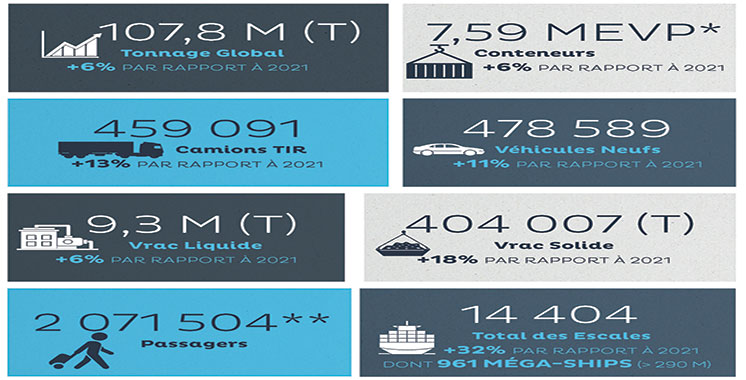 Tanger Med: Performance at the rendezvous in 2022

The performances achieved in 2022 are the result of the commitment and continued collaboration of all Tanger Med partners.

Port activity.»
Tanger Med takes stock of its activity for the year 2022. A year marked by a consistent increase in all of the complex’s indicators.

Tanger Med is posting a good performance for the 2022 financial year. The port complex sees all its indicators in the green. “The performances achieved in 2022 are the result of the commitment and continuous collaboration of all Tanger Med partners and in particular the concessionaires, the shipowners, as well as the administrations and authorities involved”, we note from the Port Authority. The overall tonnage treated during the year shows an increase of 6% compared to a year earlier, thus reaching a volume of 107,822,662 tonnes. “This traffic should represent around 54% of all the port tonnage carried out in the Kingdom of Morocco”, assures the Port Authority in its press release.

In addition, container traffic increased by 6%, i.e. 7,596,845 twenty-foot equivalent containers (TEUs) handled within the Tanger Med port complex. It appears that excellent levels of productivity were achieved during the year 2022, thus exceeding the record bar of 700,000 TEU containers handled per month. With regard to Ro-Ro traffic, double-digit growth was noted at this level. 459,091 international road transport trucks were handled, marking a growth of 13% compared to 2021.
“This good dynamic of national exports was mainly driven by the industry and agri-food sectors with respective growth of 22 and 11%”, we note in this regard. The Port Authority also notes a double-digit increase in vehicle traffic. According to available data, 478,589 new vehicles were handled at the two vehicle terminals of the Tanger Med port complex in 2022, representing a growth of 11% compared to 2021.

See also  In Kherson, the Russians take everything: "Even the bones of Grigori Potemkin were torn out"

This traffic mainly includes 295,393 export vehicles produced by the Renault factories in Melloussa and Somaca, and 124,112 export vehicles produced by the Stellantis (Peugeot) factory in Kenitra. As regards liquid bulk traffic, the bar of 9 million tonnes of hydrocarbons handled has been crossed. This traffic recorded a 6% increase compared to 2021. Solid bulk traffic stood at 404,007 tonnes handled, up 18% compared to last year. An increase mainly driven by traffic in sheet metal coils and cereals. In another context, the recovery is confirmed for passenger activity. 2,0701,504 passengers passed through Tanger Med during 2022. The maritime traffic of the complex has also increased. 14,404 ships docked in Tanger Med in 2022, including 961 mega-ships (size over 290 meters).
This traffic was consolidated by 32% year-on-year. An increase which is explained by the rise in productivity of container terminals for the reception and processing of mega-ships, as well as by the resumption of crossings for passenger traffic, especially during the Marhaba 2022 campaign.