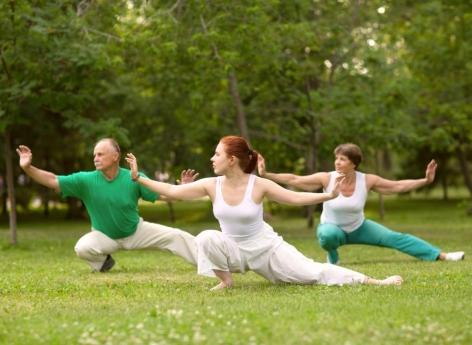 Slow movements, with hands, arms, legs, while breathing deeply: Tai Chi is sometimes called moving meditation. This traditional martial art relaxes, softens and strengthens the muscles. According to a study published in the specialist journal Strokeit could also help recover after a stroke.

160 people participated in this research: all had suffered a stroke, and retained at least the mobility of one arm. Half of this group practiced Tai Chi, the other was the control group and followed only the standard post-stroke rehabilitation program. The first group was first trained by an instructor for a week, then had access to Tai Chi videos to practice independently. “We have reviewed the Tai Chi movements for people with weakness or partial paralysis of the limbs, says Jie Zhao, lead author of the study. It is designed so that participants can move one arm with the help of the still mobile armThis activity is usually done standing up, but to make it more accessible to people with stroke, researchers developed seated exercises. For eleven weeks, participants did Tai Chi three days a week. The physical state and the psychological state of the participants were measured thanks to questionnaires, and to evaluation tools, used at the beginning of the study, then four times during the program.

After analyzing the results, the researchers found that people in the Tai Chi group had better hand and arm function, better seated balance control compared to the control group. From a psychological point of view, these participants had fewer symptoms of depression. Daily activities, and more generally quality of life, were also better in this group. “People will most likely need to continue seated Tai Chi exercise beyond 12 weeks to achieve long-term benefits.”, emphasizes Jie Zhao. This is already the case for more than half of the participants, who continued to practice after the twelve weeks of the study. The researcher intends to continue his work and measure the long-term effects of the discipline on stroke victims, but according to him, this method already has many advantages. “Seated Tai Chi can be practiced in a chair or wheelchair and is very accessible as it can be done at homesays the scientist. The program costs next to nothing to practice and requires no special equipment or travel timeIn France, the discipline is already listed among the various physical and sporting activities recommended by the High Health Authority, as part of medical prescription after a stroke.