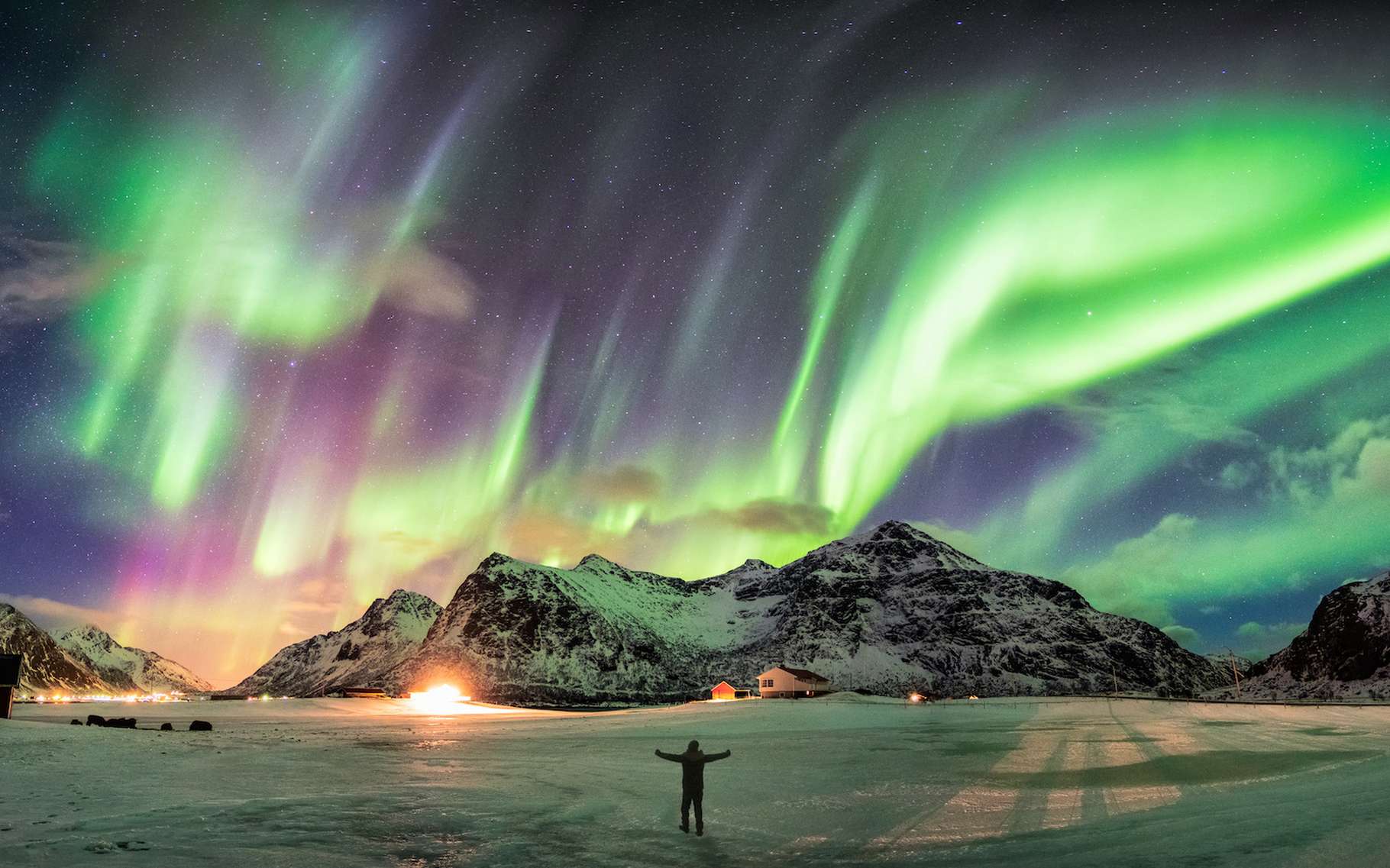 The Northern Lights have always made people look up to the sky. Astronomers know that they are born from particles blown to Earth by solar storms. But the mechanisms behind it remain difficult to elucidate. Today, researchers have for the first time succeeded in measuring one of the suspected processes in the laboratory.

The northern lights show is a wonderful spectacle. Since the dawn of time, it has fascinated people. More recently, researchers have theorized the origin of the phenomenon. But they had never yet been able to prove their hypotheses. It is now done thanks to physicists from the University of Iowa (United States). At least for polar aurora say of discrete form.

These are the best known. They appear as long arches, curtains of light undulating. They are produced by powerful electromagnetic waves, the Alfvén waves. They themselves are born in geomagnetic storms. And they speed up electrons around the Terre, leading them to light up in the sky these headbands of colors magical. Here is for the theory which dates from more than forty years ago. A theory supported by some satellite measurements which seem to reveal the presence of Alfvén waves traveling towards the Earth above the Northern Lights.

Result of several decades of work, a study today demonstrates experimentally the mechanisms physical of the acceleration of electrons by Alfvén waves. In their experiment, the researchers launched such waves into the chamber of the Large Plasma Device from the University of California at Los Angeles (United States). A cylinder 20 meters long and 1 meter in diameter. They then measured the acceleration of the electrons. The numerical simulations and the modelization mathematics show that the signature of this acceleration concorde well with that predicted for the Landau damping.

The depreciation of Landau? To understand, let’s go back through the story. And remember that solar flares or ejections from mass can severely disrupt the flow of solar wind. Enough to trigger geomagnetic storms on Earth. They are accompanied by some of the most intense auroral manifestations. In the Earth’s remote magnetism, geomagnetic storms are at the origin of a process of magnetic reconnection. The field lines break and reform, eventually returning to Earth. Kind of like a stretched and suddenly released rubber band. This rebound of magnetic field launches Alfvén waves which travel towards our Planet along the magnetic field.

The time comes when a small population of electrons, which move in the same direction as an Alfvén wave, can be accelerated to speeds higher. The physicists speak of resonant acceleration. Like that of a surfer catching a wave. These electrons therefore surf the electric field of the Alfven wave, gaining speed thanks to this mechanism known as Landau damping – the famous … – in which theenergy of the wave is transferred to the accelerated electrons, preventing the occurrence of instability. The process was first discovered in 1946.

The electrons then travel at speeds of up to 20,000 km / s. They descend along the Earth’s magnetic field and eventually collide with the atoms and molecules oxygen andazote in L’air rarefied upper atmosphere. A meeting that gives birth to these magnificent curtains of light which then sparkle in the polar sky.

Aurora Borealis in Canada This beautiful photo of the aurora borealis is available as a wallpaper on the Canadian Space Agency website. © AuroraMax

Most of the tsunamis observed in California have been small, causing a slight rise in water levels in coastal areas and little damage. But whether generated by local or distant sources, such as earthquakes in the Alaska subduction zone, tsunamis have caused death and destruction in the state’s coastal communities.

Here’s a look at some of the state’s historic tsunamis.

January 26, 1700: There are no written records, but scientists have reconstructed the event using geological evidence, oral histories, and Japanese documents that describe waves along the coast of that country during the day. A strong earthquake along the Cascadia Subduction Zone, which runs from Cape Mendocino to Vancouver Island, British Columbia, likely generated a 50-foot tsunami in Northern California.

Seismologists assure the “Great Earthquake” could be felt at any moment.

December 21, 1812: The low-lying areas of Santa Barbara and Ventura were flooded and damage to nearby ships was reported due to the powerful waves. Researchers have theorized that a landslide triggered by an earthquake caused the tsunami.

April 1, 1946: An earthquake in the Alaska subduction zone generated this tsunami, which caused flooding about 1,000 feet inland at Half Moon Bay on California’s central coast.

March 28, 1964: The most devastating west coast tsunami on record was generated by a deadly 9.2 magnitude earthquake in Alaska. It caused strong waves that hit coastal areas, including the Northern California community of Crescent City, where 11 people were killed. A sudden rise of about 20 feet in height flooded nearly 30 city blocks, according to the Department of Conservation. A total of more than 100 people died in the tsunami area, from Alaska and on the Pacific coasts of Canada and the United States.

March 11, 2011: Although not as destructive as the 1964 tsunami, a 9.0 magnitude earthquake in Japan’s Tohoku region triggered strong tsunami currents that damaged ports along the California coast. One death was reported in connection with the tsunami. The worst damage was in Crescent City and Santa Cruz.

Northridge Earthquake: A Look Back In The First Hours After The Earthquake.