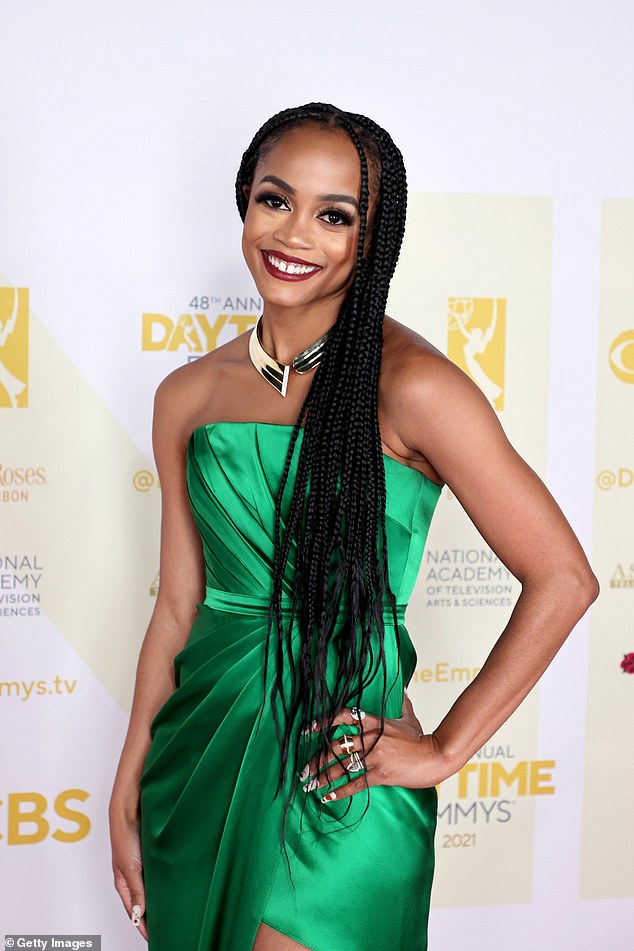 Rachel Lindsay stepped onto the red carpet earlier this month to attend a pre-taping for the 48th Annual Daytime Emmy Awards in Burbank, California, which airs Friday.

She  said there is a dark side to Bachelor Nation, the ‘Bachelor Klan’, that is ‘hateful, racist, misogynistic, xenophobic, and homophobic’. After the piece was published, Lindsay then slammed the magazine for choosing the ‘clickbait’ headline, ‘Oops, I Blew Up The Bachelor’.

‘The franchise has spent 19 years cultivating a toxic audience,’ Lindsay wrote in her latest op-ed. ‘They have constantly given it a product it wants: a midwestern/southern white, blonde, light-eyed Christian. Not all viewers are like that.’

In the wide-ranging article, Rachel opened up about the toxic environment she experienced as part of Bachelor Nation and why she decided to walk away from her popular Bachelor Happy Hour podcast following Chris Harrison’s departure. 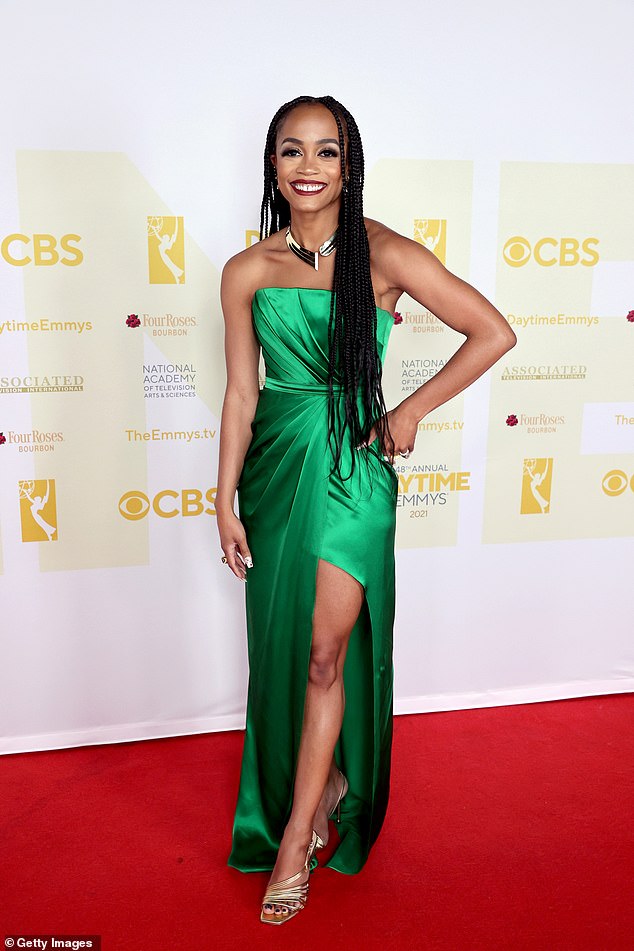 ‘The franchise has spent 19 years cultivating a toxic audience,’ Lindsay wrote in her latest op-ed. ‘They have constantly given it a product it wants: a midwestern/southern white, blonde, light-eyed Christian. Not all viewers are like that.’

While Lindsay knows not all of Bachelor Nation is like that, the more vicious side of the fandom was what forced her to exit her Bachelor Happy Hour podcast.

Rachel said she was ‘exhausted from defending myself against a toxic fandom’, adding that the vitriol worsened amid the Chris Harrison scandal.

Harrison was axed from the network after he came under fire in February for making racially insensitive comments during an Extra interview with Rachel.

Just last week it was reported that Harrison scored a hefty payout from ABC in order leave Bachelor Nation quietly – but not nearly as much as he originally demanded. 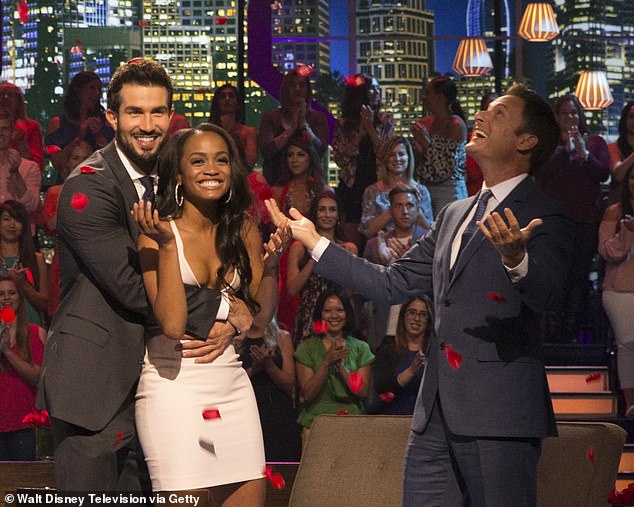 The 49-year-old longtime host reportedly received $9million from the network – far less than the $25million he originally demanded – Variety reported on Friday.

‘I wouldn’t say Chris and I were friends, exactly,’ Rachel wrote in her op-ed. ‘When you’re the Bachelorette, you’re traveling with him, sitting in hotels and airports. There’s a lot of hurrying up and waiting, and he’s the one you do it with.’

‘During my season and after, he became someone who gave me advice on how to navigate the show and the celebrity of it. I called him my fairy godfather. We’d had our highs and lows, but there had been mutual respect until this interview,’ she explained.

After the scathing piece was released, Rachel went on the offensive against Vulture for choosing what she called a ‘clickbait headline’ that read ‘Oops, I Blew Up The Bachelor’. 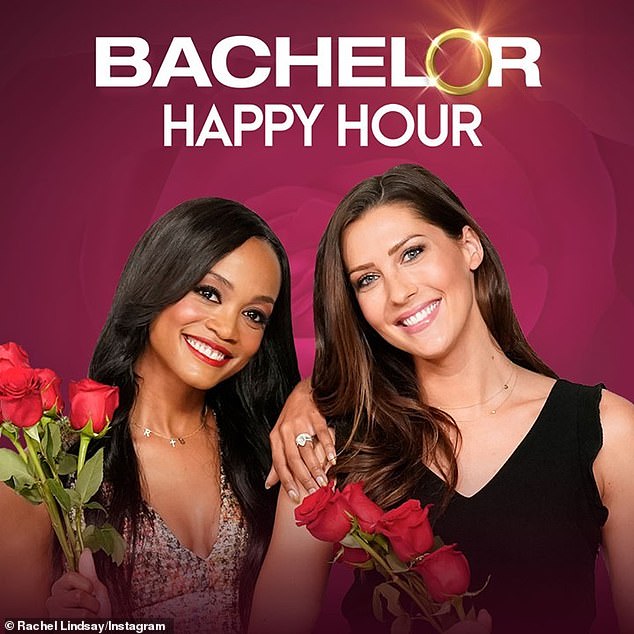 Not so rosey: The more vicious side of Bachelor fandom forced her exit from the Bachelor Happy Hour podcast. Rachel said she was ‘exhausted from defending myself against a toxic fandom’ 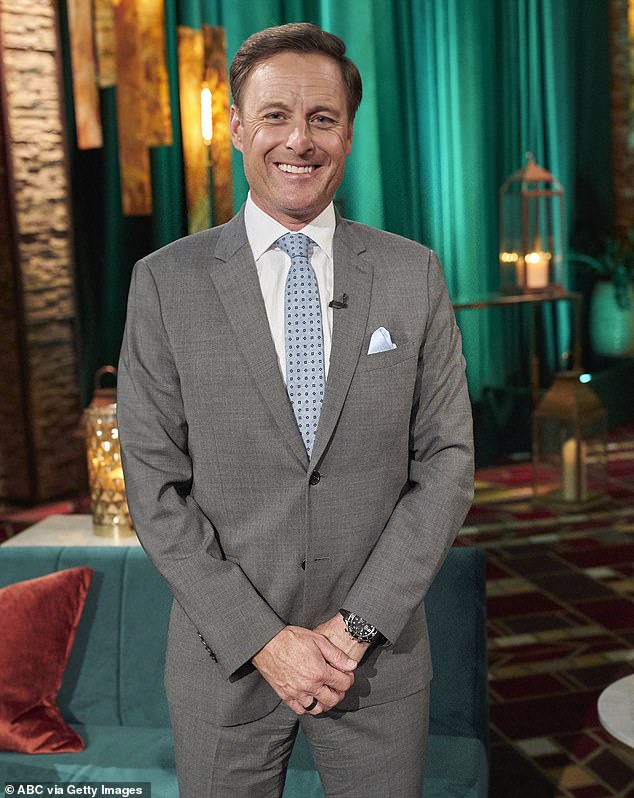 ‘I wouldn’t say Chris and I were friends, exactly,’ Rachel wrote in her op-ed. ‘When you’re the Bachelorette, you’re traveling with him, sitting in hotels and airports. There’s a lot of hurrying up and waiting, and he’s the one you do it with.’

Lindsay said in a social media post that she had worked ‘very closely’ with New York Magazine on the piece and felt the headline ‘misrepresented’ her.’

‘Those are not my words nor are they a reflection of how I feel,’ she said.

‘It is very disappointing and disrespectful that the very notion I was trying to refute was used against me by the publication for a clickbait headline,’ Rachel went on to say.

Adding: ‘My truth and my thoughts are told on the inside of the magazine which I am very proud of and hope you all read.’ 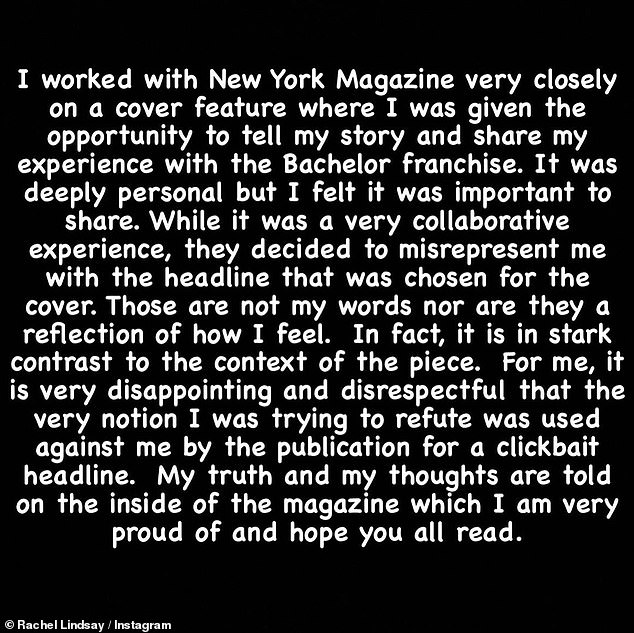 Furious: After the scathing piece was released, Rachel went on the offensive against Vulture for choosing what she called a ‘clickbait headline’ that read ‘Oops, I Blew Up The Bachelor’

Earlier this month, Lindsay sparkled on the red carpet in an emerald green strapless dress that was gathered at her slim waist as she attended a taping for the Emmys.

The column gown featured a high slit that showcased her strappy gold sandals and the neckline emphasized the beauty’s cuffed metal statement necklace.

The Extra correspondent had her long hair down in box braids that cascaded to her waist and she rocked a pop of color on her lips with burgundy lipstick.

Rachel was on hand for a pre-taping for the upcoming Daytime Emmy Awards which was filmed in the beginning of June. The telecast, hosted by CBS star Sheryl Underwood, will air on Friday June 25th.

Lindsay joined Extra for season 27 and the Billy Bush helmed program is nominated this year for Outstanding Entertainment News Program. 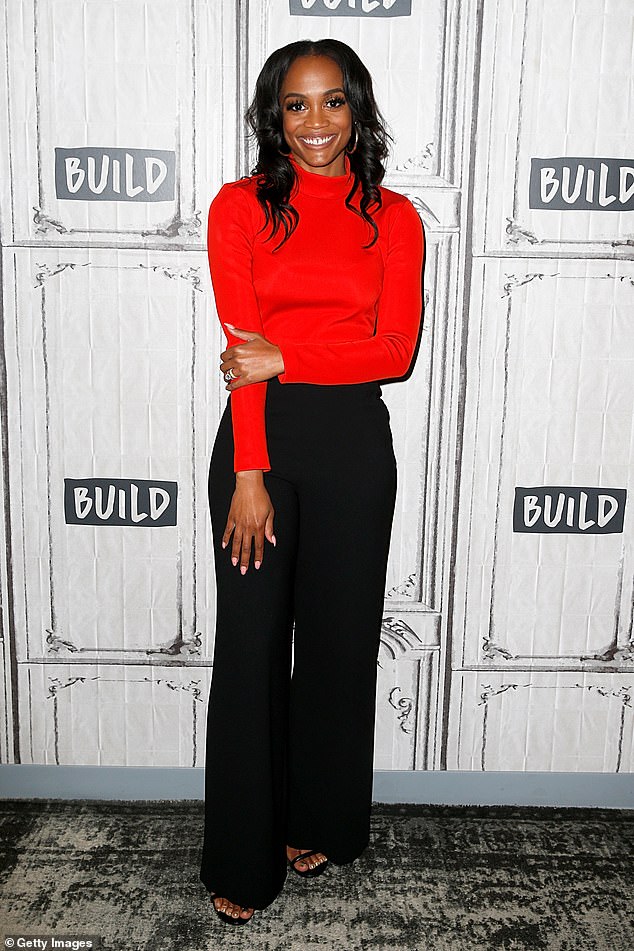 ‘It is very disappointing and disrespectful that the very notion I was trying to refute was used against me by the publication for a clickbait headline,’ Rachel went on to say. 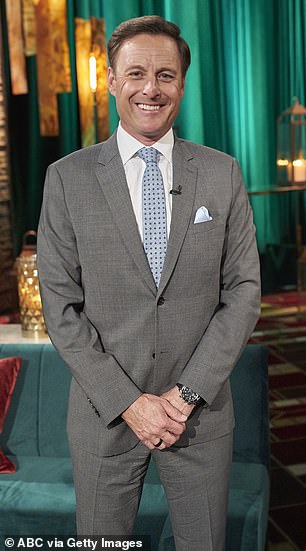 Chris Harrison allegedly demanded a $25million payout to leave The Bachelor franchise – or else he would air 19 years of behind-the-scenes secrets in a slew of lawsuits against the its producers and executives.

Sources familiar with negotiations surrounding Harrison’s abrupt exit on Tuesday said ABC Studios had hoped the 49-year-old would leave ‘quickly and quietly’ amid backlash over comments he made defending a contestant who appeared in pictures at a plantation-themed fraternity party.

Instead, Harrison fought back.

‘He has nearly 20 years of dirt,’ an insider told Page Six. ‘Instead of handing them a rose, he was absolutely ready to hand them a lawsuit detailing all the behind-the-scenes details.

‘He knows a lot about inappropriate behavior on set: fights between contestants, misbehavior including [the] use of illegal substances while overseas and complaints from producers that were allegedly brushed under the carpet by ABC execs.’ 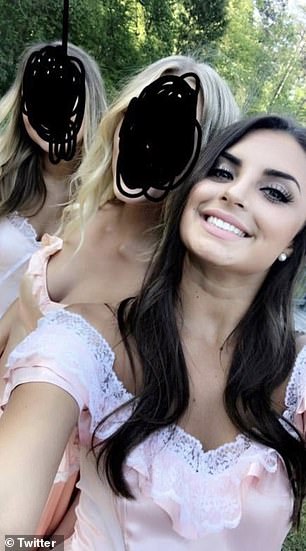 Chris Harrison officially left The Bachelor franchise on Tuesday, after serving as host for 19 years. His departure came after he faced intense backlash for defending contestant Rachael Kirkconnell (right) after photos emerged of her at a 2018 Old South plantation-themed fraternity formal

‘He was ready to tell the truth about how things really work over there, and he had plenty of evidence to back him up,’ the source continued.

‘Chris Harrison’s whole life was The Bachelor and he did not want to let go.

‘He still is really sad to leave, and there have been very tough and very heated negotiations going on for weeks.’

Harrison is now walking away from the franchise he has hosted for 19 years with a mid eight-figure payout, Deadline first reported Tuesday, although sources familiar with the negotiations said it is not as high as the $25million he demanded.

The payout came with a promise to ‘keep his mouth shut’, per Deadline.

Representing Harrison in the negotiations was prominent Los Angeles lawyer Bryan Freedman, who had previously represented The Bachelor creator and executive producer Mike Fleiss’ wife in their divorce when she claimed he was abusive.

‘Chris Harrison hired Bryan Freedman, who represented Mike Fleiss’ wife, which immediately set an aggressive playing field,’ a second source told Page Six. ‘It was a bunch of emotionally-charged men in a room who were not happy with each other at all.’ 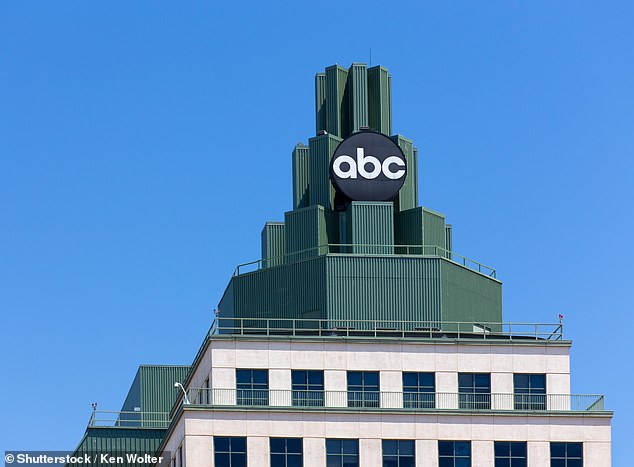 Warner Media and ABC Entertainment confirmed Harrison’s departure in a statement after Deadline broke the news.

‘Chris Harrison is stepping aside as host of The Bachelor franchise,’ the producers told Fox News in a statement. 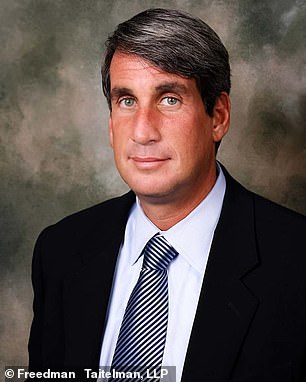 ‘We are thankful for his many contributions over the past 20 years and wish him all the best on his new journey.’

Harrison – who served as the host of The Bachelor and its spinoffs, The Bachelorette and The Bachelor in Paradise, since 2002 – also wrote a goodbye post on his Instagram page.

‘I’ve had a truly incredible run as host of The Bachelor franchise and now I’m excited to start a new chapter,’ he wrote. ‘I’m so grateful to Bachelor Nation for all of the memories we’ve made together.’

‘While my two-decade journey is wrapping up, the friendships I’ve made will last a lifetime.’

Former Bachelor Colton Underwood also shared his support for Harrison, posting a tribute to Harrison on his Instagram story and calling him a ‘Grade A human being.’

‘Thank you for being a friend, a stand up guy and a hell of a host,’ Underwood wrote. ‘Can’t wait to see what you do next.’ 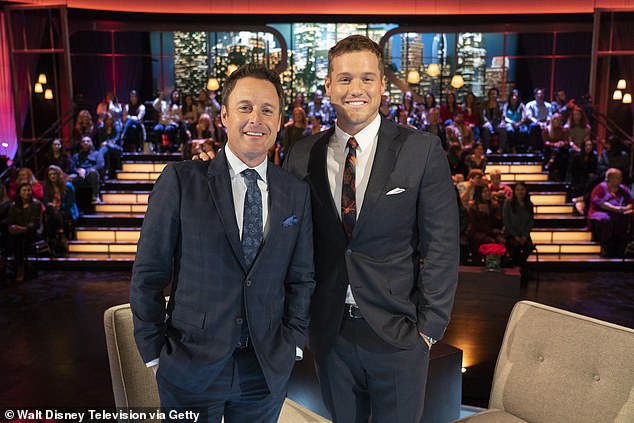 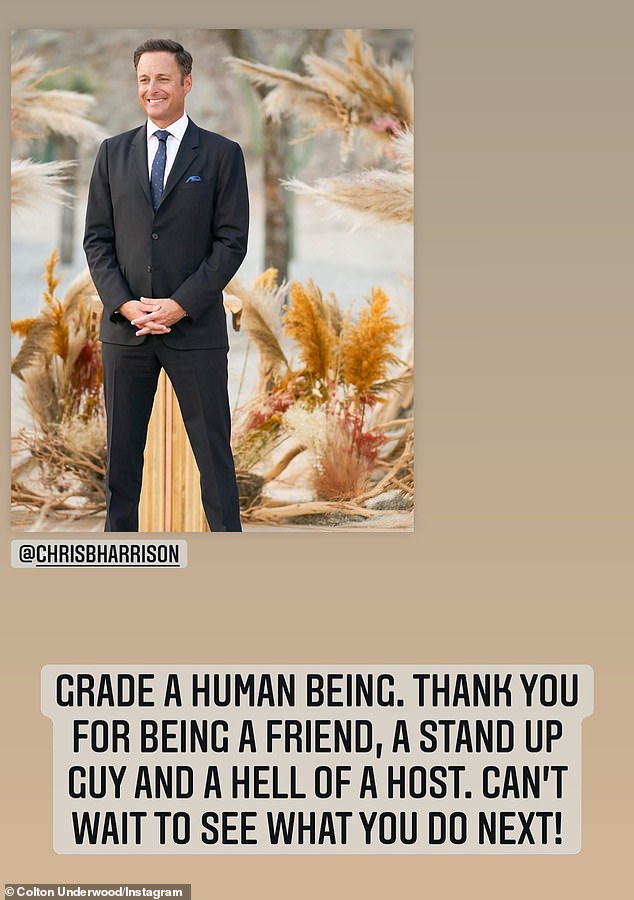 Underwood’s post called Harrison a ‘Grade A human being,’ a ‘stand up guy and a hell of a host’ 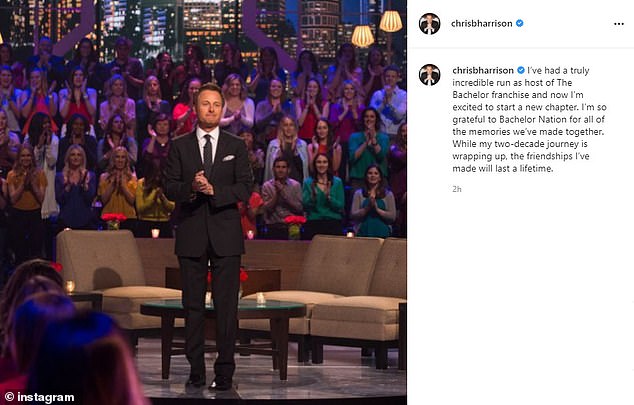 Harrison’s departure comes roughly five months after he came under fire for an Extra interview in which he seemed to defend a contestant, Rachael Kirkconnell, over 2018 photos that showed her participating in an Old South plantation-themed fraternity formal.

He said that in the February interview: ‘We all need to have a little grace, a little understanding, a little compassion’ toward Kirkconnell amid the turbulent times of the ‘woke police’ and cancel culture.

‘I have seen some stuff online — this judge, jury, executioner thing, where people are tearing this girl’s life apart and diving into, like, her parents’ voting record,’ he said. ‘It’s unbelievably alarming to watch this.’

‘I haven’t heard Rachael speak on this yet,’ Harrison continued. ‘And until I actually hear this woman have a chance to speak, who am I to say any of this.’

Those comments sparked backlash online, and Harrison later took to Instagram to clarify his remarks.

‘While I do not speak for Rachael Kirkconnell, my intentions were simply to ask for grace in offering an opportunity to speak on her own behalf,’ he wrote. ‘What I realize I have done is cause harm by wrongly speaking in a manner that perpetuates racism, and for that I am deeply sorry.’

By Valentine’s Day, Harrison announced he would be ‘stepping aside for a period of time’ during the show’s first season to feature a black Bachelor.

Harrison apologized for his remarks in the interview with GMA host Michael Strahan in early March, admitting he was ‘insensitive’ and ‘made a mistake’ as he vowed to return to the reality show and ‘be part of the change’.

But his apology was dismissed by Strahan who suggested his contrition was just ‘surface’ and a ploy by his fellow ABC colleague to get his $8million a year job back.

Harrison apologized in an interview with GMA host Michael Strahan in March, saying he was ‘insensitive’ and ‘made a mistake’ (above)

Kirkconnell, meanwhile, received the final rose from Bachelor Matt James in the March 15 season finale, but in the ‘After the Rose’ special that night, James said he had cut things off.

The couple is now ‘trying to make it work,’ James told the Wall Street Journal last month, and are now planning to move in together, according to Page Six.

James was reportedly ‘hesitant to publicly and outrightly confirm’ the relationship because it was ‘still fresh and they still have issues to work through,’ an unnamed source allegedly told Page Six .

‘Rachael already faced scrutiny for her past, and now all eyes have shifted to Matt,’ the source said. ‘So he’s feeling pressure to set a good example for other black men.’

The couple was recently seen together in Miami and the Hamptons. 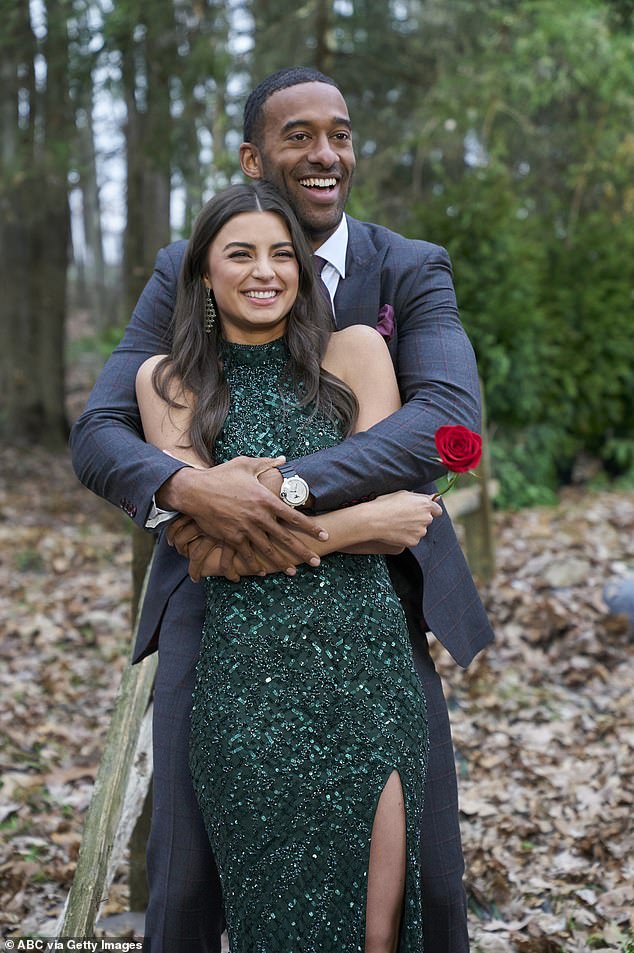