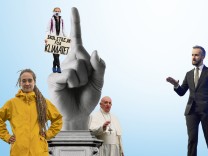 Until Gabriel Wilson pulled the club out of the sleeve of his jacket, which he had decorated with a metal wreath at the tip, it was one of the conversations I often have in passing when traveling. I met him in Portland, Oregon, where I’d flown to see what people were up to on the West Coast.

I ran to the local federal court and saw the makeshift kitchen that cooks every evening for the demonstrators who have been protesting against racism here since May. I strolled past it unobtrusively, I found.

“What do you want?” Asked one of the men who were cleaning up there.

“What’s your name” he asked.

“I’m Gabriel,” he said, “looks like we have a Catholic assembly here.”

A number was tattooed over his left eye. As a foreign correspondent you are allowed to ask all those stupid questions, usually with impunity. So i asked.

“That tattoo – you were in a gang and in jail, right?”

“Nothing,” I said, “only that you probably didn’t just steal candy.”

Gabriel looked at me with a broken neck.

I told him. He nodded.

He was wearing a kind of pepita hat and a backpack. A band-aid was stuck to his face, from the left side of his nose to his chin. Gabriel asked if I was afraid of him.

He pulled the club from his sleeve. I hadn’t noticed that he had to keep his left arm straight because of the stick.

“My age doesn’t matter,” he said. I looked at the club.

The tattoo under his left eye was a couple of letters that I couldn’t identify. Under his right eye he carried the picture of an angle over which three stars had been drawn.

He took off the hat and the headband that he was wearing under his hat, he put the club aside, he put his hand on his heart. I took the picture.

Barbara Stamm was the most popular politician in Bavaria for a long time, and she has been retired for two years. A conversation about letting go, her illness and whether Markus Söder still listens to her.

A glass of wine in the Würzburg Juliusspital, that’s a good way to chat with Barbara Stamm. She’s retired politically, but she hasn’t stopped worrying. And she can still get excited like before.

If Markus Söder would have listened to himself. A month ago, Bavaria’s Prime Minister received Angela Merkel on Herrenchiemsee. He related the following episode: During the first peak of the corona pandemic, she told him that in difficult times her motto was: “There is strength in calm.” In their impression, Söder was “not quite like that yet”, but it wouldn’t hurt him to take up this motto. “I think you can do that,” said Söder, but he smiled his wolfish smile.