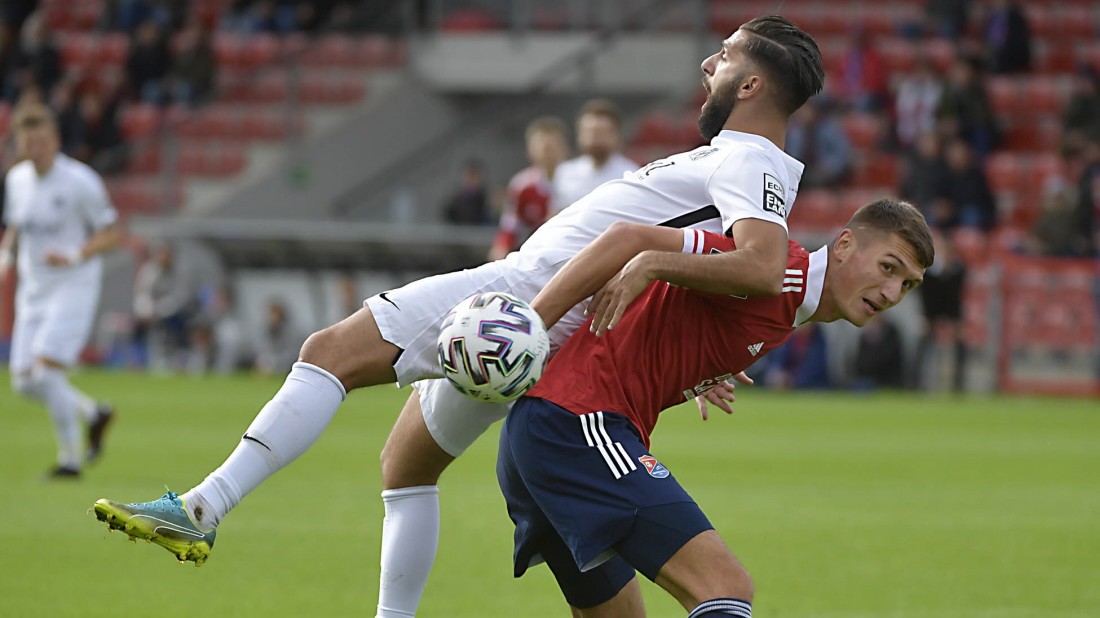 Already at the parking lot, a breath of sausage scent wafted through the air. An unmistakable sign that things would be a bit like before. And indeed, at the third division game between SpVgg Unterhaching and SV Meppen on Sunday there were people in the stadium who did not wear shorts and socks – spectators called this species believed to be extinct before the corona madness and the era of ghost games. Driven by 1128 fans – up to 1425 would have been allowed – the Hachinger team was in great shape, especially before the break, in the end they prevailed with 2: 1 (1: 1) and after three wins from four games moved up to the table two in front, one point behind leader 1860 Munich.

SpVgg coach Arie van Lent could hardly hide his joy even before the game: “Finally spectators again! No matter how many there are, we will have the feeling that it is full.” And so his team appeared self-confidently after two 1-0 victories, constricting the Emslanders in their half, but without creating compelling chances. Meppen came dangerously in front of the Hachinger box for the first time after a quarter of an hour, a deflected cross from Hassan Amin landed at Marcus Piossek, who, under pressure from Max Dombrowka, served his colleague Hilal El-Helwe. From close range, the center forward completed the guests, the complaints of the red-blue about an alleged offside position went unheard.

But the Unterhachinger quickly recovered from this blow in the neck. Patrick Hasenhüttl used a cross from Markus Schwabl from the right to equalize (19th), the Meppen defenders had left a good distance to the Austrian center forward in accordance with the applicable hygiene rules. And the hosts continued to apply pressure, Hasenhüttl failed to goalkeeper Luca Plogmann, two meters away from Alexander Fuchs was completely free (21st). Lucas Hufnagel hit the post from an acute angle after a pass from Luca Marseiler, Moritz Heinrich pulled the ball past the gate from the left (31st), Hufnagel from the right (42nd), and in between Christoph Greger tried in vain an overhead kicker (42.). “We totally determined the game and should have scored two, three or even four goals by the break,” said Van Lent after the game.

You had the feeling that this flood of unused chances would take revenge in the second half. Promptly, the guest came better into the game, also because Haching had to pay a little tribute to the enormous speed from the first half. Goalkeeper Nico Mantl saved his team from falling behind again when he first mastered a 15-meter cracker by Piossek brilliantly and only moments later parried a header from Christoph Hemlein after defender Dombrowka had allowed himself a short break (56th).

Haching survived this first period of urgency of the guests, then fresh forces came into play, of which Dominik Stroh-Engel introduced himself with a header just over the goal (64th). Eight minutes later came the big hour for Niclas Anspach, who became the match winner in his third third division game. Schwabl first scratched the ball off the sideline with a heel trick, Hufnagel reacted quickly and sent Anspach on the journey, who still ran a few steps, pulled it from 15 meters and hit the goal with the help of the inside post – 2: 1 (72nd). “I ran up to the chain, nobody attacked me and I thought I would just try it,” said the 20-year-old afterwards Magenta Sports.

Arie van Lent had shown a lucky hand with the substitution. The coach later said he had the feeling that Anspach “might be able to help us today”, because recently he had often lacked the courage to simply finish. And of course, the former striker Van Lent also knows the iron rule of all offensive players: “If you don’t shoot, you can’t score.”

In the final phase, the Unterhachingen victory was in danger again and again, for example when Jannik Bandowski, who was also substituted, was just able to clear Meppens Valdet Rama (82nd). Then it was over and Meppen’s coach Torsten Frings was in the basement: “In the second half we were the better team, but we have to be even hotter for the 2-1. Haching won because they scored one more goal than us “grumbled the former international.

Coach Van Lent is not impressed by the fact that SpVgg is now in second place. “But it shows that we have scored points and that we are on the right track.” And that in turn will help for the next few weeks.

Third division soccer team SpVgg Unterhaching will not allow any spectators to attend the home game against newly promoted VfB Lübeck this Friday evening (7 p.m.). “Due to the rapidly increasing corona numbers in Unterhaching and the surrounding communities, the responsible district office made an urgent recommendation,” the association explained. For President Manfred Schwabl it was “the only logical consequence to play without a spectator”. Originally, the SpVgg had planned with up to 3000 visitors in view of the lower incidence in the district compared to the city of Munich. Despite the increase, a game could have taken place in front of spectators, as the incidence value in the district and the neighboring districts is below the value of 35 set by the DFB, said the SpVgg. “If the current situation does not allow a game with spectators, then of course we accept it,” emphasized Schwabl.

Manfred Schwabl, President of the Unterhaching third-division soccer team, about his lack of understanding for the supporters of demolition, dishonesty in Saxony and hotel prices in Mannheim.

On Sunday afternoon, third-division soccer team SpVgg Unterhaching went to Holzkirchen in the quarantine hotel, and on Saturday the third in the table at Sonnenhof Großaspach starts the remaining season. President Manfred Schwabl therefore wanted a non-digital video conference before departure, and so there was the first meeting with journalists for over two months – in the stadium beer garden: a box of protective masks was ready on a table, all the required distances were observed. Schwabl was easy to understand even at a distance, because the arguments with some East German clubs and Waldhof Mannheim are not very easy to understand.

SZ: Mr. Schwabl, you are going to minibuses in the six-day quarantine. Where does the team stand in terms of sport, what is important to find the rhythm?

Manfred Schwabl: You have to be careful not to train too much. It’s a cold start without friendly games, and then you only have English weeks left, then all you have to do is regenerate, play regenerate, play. It’s about the tact of the coach. I look forward to Saturday at 2 p.m. in Großaspach. Until then, to be honest, I have completely different topics that I have to deal with.

There has been a lot of argument and chaos in the past few weeks, some clubs don’t want to continue playing.

The way some people behave, I wonder if we’re still a professional league or an amateur league. If I am a professional club, then I should also want to measure myself, on the field and not on the green table. When I read again today what is happening in Saxony with Chemnitzer FC and FSV Zwickau – I think that is a prime example that things are not always completely honest. And that’s how it is in Mannheim: Every day they have a different reason why they don’t want to play. I think: If you are an athlete, you have to do everything for it and throw everything into balance that you can do your job.

What exactly do you mean by the fact that some things in Saxony are not entirely honest?

The Saxon association president Hermann Winkler says that he only supports the continuation of the season if both clubs are in favor of it. Without getting too close to him, but that no longer has anything to do with my sporting fair play. In Chemnitz they were completely surprised by this application! I don’t know what they have been doing in Saxony in recent weeks. In Thuringia, the mask requirement is lifted, but Carl Zeiss Jena says they cannot train. The exterior of the third division is a disaster.

Do you see gaming operations at risk when there are so many stones in the way?

Not at all. The DFB has shown a clear edge against the allegations, they drove the clubs into bankruptcy. I don’t see anything burning, unless of course there is a second wave and five clubs have to be quarantined, but then that’s the way it is and we have to accept it. But when I am constantly looking for reasons why it shouldn’t work – it knocks me out. If I can’t afford a hygiene officer – well, I don’t think he deserves more than a top striker in Mannheim … Waldhof Mannheim said the hotel costs 58,000 euros. Are they staying in Dubai in the tower? I just came from the hotel in Großhartpenning near Holzkirchen, I just set the prices. We’re about a third of that.

Was it not foreseeable that this escalation would occur at restart? There has been a long argument.

Ultimately, this disagreement is due to the basic system. If the fourth rate of television money were now so high that everyone can survive, we would all agree. It’s all about powder! That everyone in the first and second leagues is so unanimous: of course, if the fourth rate is so high, then as a professional club you also accept ghost games. In the third division, the rate is much lower than what some get in on short-time work. I am glad that we were the only club to do without short-time working alongside Bayern II. Because in my view that has nothing to do with a professional club, but everyone can decide for themselves. We agreed a month with 25 percent waiver of wages, that was in April, and it stays that way.

If the fourth rate is so low, do you also have some understanding of the clubs who say that it would simply be cheaper for us not to play?

In the end, yes, because it’s about money and because there are still liability issues of managing directors and others. The topic falls on our feet. But I also say: I have to be able to manage such a crisis somehow. I’ve been preaching that for years that the discrepancy with the second division is far too high, that’s just not true. In terms of sport, the third division is a dream, but just as the situation is now, you have the economic constraints that you just have to push yourself up. If I throw in a talent, it will surely play for less than the Dominik Stroh-Engel. We only committed to him because we said: Now let’s try that we somehow come up, that we can get rid of the financial worries. I said to the boys: We now have five weeks to go from hell to paradise. I want everyone to get everything in there. Those who cannot withstand the pressure in these five weeks have to get out. We have to rush through it like an ICE.

The DFB Bundestag will take place by video conference on Monday. Is there going to be an opinion on this topic, do you expect impulses?

No, there will be liability issues, and whether the Presidium can decide on promotion and relegation regulations alone if the season still has to be canceled after two match days. And Saxony’s request to end the season is rejected with timpani and trumpets.