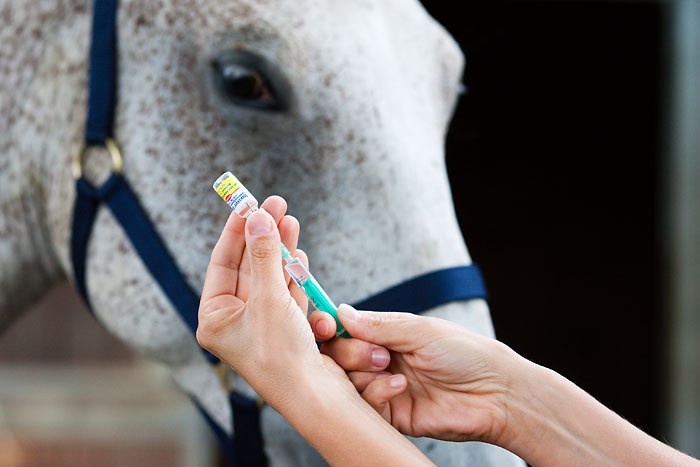 As a result of the herpes virus outbreak at an international tournament in Valencia (ESP), a total of 18 horses from different nations died in spring 2021. Calls for the introduction of compulsory vaccination against equine herpesvirus 1 (EHV-1) were loud. On the occasion of the annual meeting of the German Equestrian Association, the Sports Advisory Board discussed the advantages and disadvantages of compulsory vaccination.

According to FN veterinarian Dr. Enrica Zumnorde-Mertens to reduce virus excretion within a herd. However, this only works if all horses in a herd are vaccinated. When fewer viruses circulate, the risk of disease transmission decreases. However, a vaccination cannot protect the individual horse from infection or disease. In addition, the vaccination is less effective when vaccinated and unvaccinated horses are kept together. And as with any vaccination, there is also a risk of side effects with the EHV-1 vaccination. Nevertheless, the majority of the benefits of vaccination against EHV-1 predominate, according to a broadcast by the FN on Wednesday.

The transition year is intended to prevent delivery bottlenecks

In recent years there have always been problems with delivery bottlenecks around the EHV-1 vaccination. That should be different in the future. According to the FN, there are currently three vaccines on the market whose manufacturers have already signaled that they can meet the expected vaccine demand. The year 2022 is to be used as a transition year in order to ensure sufficient lead time. In this way, on the one hand, enough vaccine can be produced, on the other hand, all competition riders have the chance to have their competition horses vaccinated in good time. After the basic vaccination has taken place, half-yearly booster vaccinations analogous to the influenza vaccination are required.

The compulsory vaccination for competition horses will come into force in Germany on January 1, 2023.

The climber is recognizable on images from the security camera. The petting zoo has filed a report with the police. The young woman first tried to open the gate on the outside, when that failed, she climbed over it.

“Bella already had back problems,” says Eefje Castel van de Klepperhoeve. “The girl who rode on it is much too big. Yesterday while brushing, we noticed that Bella was in even more pain than usual. We saw from images that the girl is familiar with horses. But she almost landed with her feet on the ground she was that big. And Bella is a little pony.”

The action was discovered when employees of the petting zoo saw the ponies in the front yard. “She hadn’t done the slide on the stable.” The images show that the young woman tried to take Bella with her. “She had the right halter. I think she really cared about Bella. She tried to get through the gate with her. She’s been on the farm for over half an hour.”

“We are really angry about this. We have never really had anything and it has happened in the last year. At the end of last year goats and sheep were released, but we have never experienced anything like this before. It is just scary. touches you greatly when they touch your animals.”

Bella is an older Shetland pony. Because she has back problems, she is no longer ridden. “She does come along when we do a round with the other pony. And she loves being brushed by children.”