“She’s not as cute as she wanted to appear.”


Meghan Markle again provoked a wave of negativity in her address. This time it’s about the new ITV documentary Harry & William: What Went Wrong?

British journalist Penny Junor accused the Duchess of Sussex of making people unhappy from the very beginning and not being “as charming as she wanted to appear” after her marriage to Prince Harry.

“She should have shared her suicidal thoughts with a psychiatrist, not on the Oprah Winfrey Show. Such revelations should not be broadcast to the general public. This is what should happen on the psychiatrist’s couch, ”says Penny Junor in the film.

Such harsh comments related to Meghan and Harry’s interviews with Oprah Winfrey. In a conversation with Oprah, the 39-year-old duchess said that none of her family members supported her after the suicide attempt. It was one of the most high-profile accusations made by the Dukes of Sussex on a television show earlier this year, after the couple disowned the royal family and left for California.

“Initially, the Duchess acted as if she was in show business and deals with pop stars. But the royals are not pop stars. These people are in the service of our state, ”Junor continued.

In the same documentary, the royal biographer, writer Robert Lacey stated: “Someone close to William told me that he felt from the beginning that Meghan had some kind of plan.”

And all this is happening against the backdrop of news that Prince Harry will return to the UK in the fall with his wife.

The Danish national team beat the Czech team with a score of 2: 1 and reached the semifinals of the European Championship. Kommersant asked football experts about their impressions of the last match.

– The Danish national team reminds me, with some reservations, of the Canadian national team at the recent Ice Hockey World Championship. They started with three defeats, and in the end they became champions, while they sorted out the Russian national team along the way. The analogies are quite appropriate. We see that after two defeats at the start, the Danish national team, having beaten Russia, is gradually gaining momentum, and in the absence of a leader, with injuries of other key players. A very balanced, agile, well-managed team, coaching in a good sense of the word. Even when the score became 2: 1, the Danes did not have to be particularly nervous, they defended competently, did not leave any free zones, and Simon Kjaer took off the entire top. An absolutely deserved victory for the Danish team, good counterattacks, Poulsen had a moment, others. The Danes are great, it is clear that they were a little lucky with the grid, but in terms of class they surpassed the Czech Republic, and even more so Wales in the 1/8 finals. On the one hand, it happened so, on the other, we see that the Danes are well prepared for this championship. They have at least a bronze – a great result!

Photo: from the personal archive of Leonid Stepanov

– It was a clash of two teams – the sensations of the tournament. Hardly anyone could have imagined before the start of Euro that both teams would go so far, but this championship is rich in unexpected results. The first half was left for the Danes, who acted easily and naturally, even with a slight superiority. It seemed that the Scandinavians were spending exactly as much energy as it takes to win. After two goals, one might have got the impression that the result was obvious, but Schick’s goal “from the locker room” at the beginning of the second half brought the Czechs back into the game. The Danes began to act “number two”, slowed down, sometimes snapping back dangerous counterattacks. The Czechs pumped up, they were very good, but the ball did not go into the goal. Perhaps the Czechs lacked freshness, lacked the lightness that allowed them to play fast and aggressive football in previous games. The spirited Czech squad leaves the tournament with their heads held high, and Kasper Juhlmann’s team is just one step away from the final, and why not repeat the golden success of their Euro 92 team?

Photo: photo from the personal archive of Oleg Vlasov

Oleg Vlasov, sports columnist for the online edition “Rating of Bookmakers”, an independent bookmaker analyst, a former member of the RFU commission on the prevention of fixed matches:

– Before the start of Euro, no one could have imagined that one of these teams would be in the semifinals. And here – this is a miracle, next to it. And this circumstance was supposed to shackle the opponents, so I was expecting a stringy and pragmatic match of equal teams. But the beginning of the game immediately broke all my pre-match layouts. A quick goal against the Czech Republic instilled confidence in the Danes, and they immediately began to act as favorites. And the Czech national team, on the contrary, somehow lost ground and conceded the second goal. There was no feeling that the Czechs would save this match, even after taking back one goal. The Danes controlled the game, in the end they deservedly passed to the semifinals and will be a tough nut to crack for the England national team (I have no doubt about its victory over Ukraine, although I will root for our brothers). Especially amazing matches await us, although in almost every meeting I enjoy a beautiful football performance. And I still believe that the Italians will defeat the descendants of the creators of football even on their home ground.

Actress Mai Kassab announced the release of her husband Oka’s new album, “Mohamed Salah”, through her account on the social networking site Instagram.

We recommend to you: After the House of Obedience.. a new message from Hala Sedky’s husband

Kassab posted a picture from her wedding and commented, “Praise be to God, today we handed Oka’s new album #Mohamed Salah, God willing, you will hear a different album in every need, lyrics, melodies, distribution, performance, Mix Master, tired months. Beloved, thank you for the support and love that you give us all the time, we love you more.” 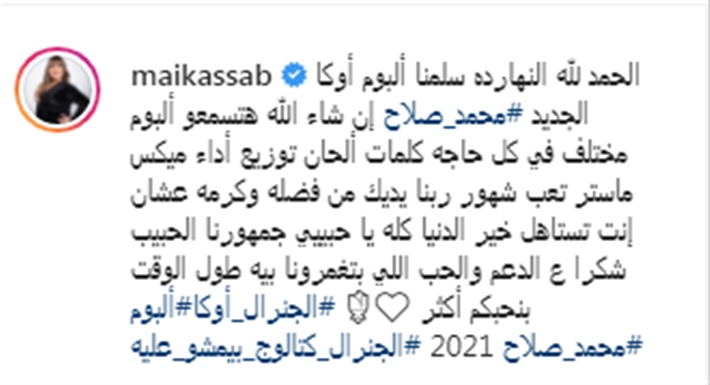 The audience interacted with the publication, including the artist Chico, Badria Tolba and many other Oka and Mai Kassab fans.

It is worth noting that Mai Kassab participated in the game series, in its first and second parts, with Hisham Majed, Chico, Mirna Jamil, Arefa Abdel Rasoul, Muhammad Tharwat, Ahmed Fathi and other elite stars.

Muhammad Ramadan to Hussein Fahmy: Thank you for giving me the title “Al-Wad Al-Taqeel”

They criticized her for “laughing” at her mother’s funeral and causing controversy with her clothes and her romantic relationships.. Who is the new Syrian babe Haya Maraachli?