The Argentinian Gaston Taratuta He decided to leave his job in a dependent relationship to start his career as an entrepreneur. With $ 5,000 in your pocket, founded more than 20 years ago an advertising company called Aleph Holding and today it met a milestone: His firm plans to go public in New York in 2022 and has already achieved a valuation of US $ 2 billion, making it the seventh Argentine unicorn.

Recently, the Argentine digital media company announced that sold stakes to Capital Partners, a private equity firm, for $ 470 million. According to the company, this fundraiser will allow existing employees and shareholders to sell shares.

This transaction raised the company’s total valuation to US $ 2 billion and, according to sources close to the matter, Aleph is preparing to hit the New York Stock Exchange in early 2022.

However, before his first public offering, Argentine businessman Taratuta says that much remains to be done and clarifies that they will continue to expand their offerings on a global scale before that happens.

The company has been profitable for several years and was not looking for new capital to finance its growth. Instead, This fundraiser will allow existing employees and shareholders, including founder and CEO Gastón Taratuta, to sell shares. Notably Sony, the Sony technology company, it also owns 10% of the shares of the company.

The unicorn concept aims at technology companies, which were founded by entrepreneurs with less than 40 years So what they reached a valuation of more than US $ 1 billion.

In Argentina, the companies that have already achieved the status are Mercado Libre, Globant, Despegar, OLX, Auth0 and Vercel.

Today, Aleph was revalued at $ 2 billion and made the list.

These Argentine firms stand out for expand by leaps and bounds in the market and because they are able to adapt to adversity. On the other hand, they are also recognized for their returns in the market: this year, Mercado Libre, Globant and Despegar increased their turnover in dollars by 100% and, therefore, had positive returns for their shareholders and investors.

This is also the case with Aleph: Taratuta’s company generates 90% of its income outside the United States and, according to internal company data, They estimate to bill more than US $ 1 billion in 2021.

The company’s business model is based on offer marketing tools, social media management and digital advertising to large companies to target new markets.

In short, the companies that make up Aleph develop algorithms to optimize accounts, marketing campaigns and digital advertisements and they help, finally, to boost the sales of a business.

According to company data, they serve more than 10,000 advertisers.

Your company’s operations expand to more than 5,000 clients and 60 markets globally. In total, 700 people work and have more than 20 strategic clients such as Facebook, Twitter, LinkedIn, Snapchat, Spotify, Warner Music, Twitch, EA Games, and more.

The founder of Mercado Libre, Marcos Galperin, has a relationship with Taratuta for more than 20 years. He considered him on several occasions “a great entrepreneur who never lowers his arms.”

In this vein, yesterday, the businessman celebrated Aleph’s success and his imminent arrival on the New York Stock Exchange in 2022 through his official Twitter account.

“This is epic. Congratulations Gastón! Clear example of the motto, persevere and you will succeed”Galperin tweeted. 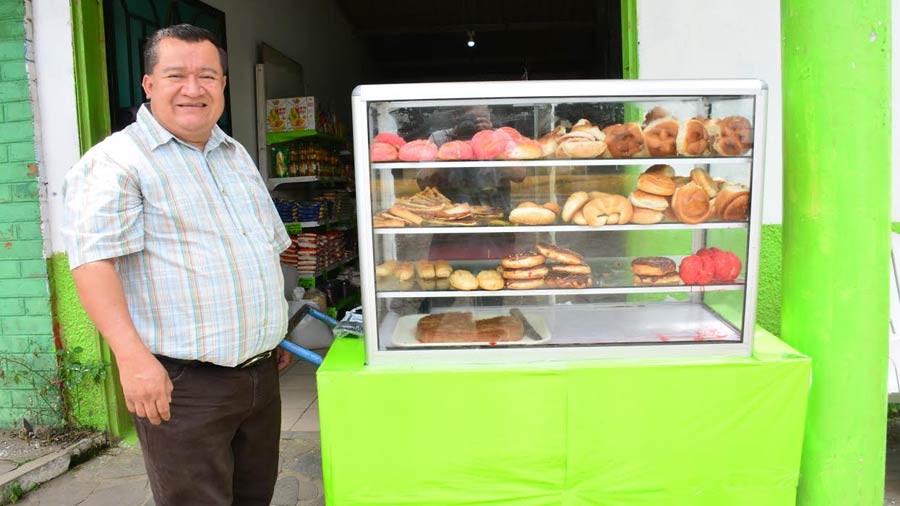 The viral video of the backpacker harassment has caused the small business to gain popularity and increase its profits.

Erick Rivera gained notoriety, among many Salvadorans, after he defended his rights as an entrepreneur before a foreign tourist who bought him a bread filled with jelly; but that after ten minutes he returned to his business, in Concepción de Ataco, Ahuachapán, to ask him for a refund of the dollar he had paid for the product that he had already eaten, according to the Salvadoran.

The video of the incident went viral, to the point that many people have cataloged Rivera, originally from Tacuba, in the same department, as a symbol of the struggle for Salvadoran dignity.

SEE: Outrageous in social networks backpacker who said he was known to Bukele and harassed a bread seller in Ataco

The Ahuachapaneco is cheerful, helpful, and likes to talk; But he also knows the rights and obligations he has because he studied legal science at a local university.

He graduated from this profession in 2005; but his passion is being an entrepreneur.

After the incident with the backpacker, who did not want to pay him $ 1 for bread, the entrepreneur says he has received support. Photo EDH / Cristian Díaz

On Thursday, June 10, he began his working day in Concepción de Ataco, where just five days before he had reopened the sweet bread business.

He did it in a new place since during the pandemic caused by COVID-19 he had to close the business that operated for about three years in front of the house that he currently occupies, always at the entrance of said tourist municipality.

VIDEO: Entrepreneur from Ataco appreciates support and receives the first donation after controversy with “influencer”

He said that on Thursday noon the tourist arrived, identified as Timmy Karter, who asked for the prices of the variety of sweet bread that he offers. The foreigner bought a bread stuffed with jelly, among other ingredients, worth a dollar.

“He went inside (from Concepción de Ataco), he was eating it; we continue to dispatch clients. Later he came back and demanding that we return the money, he had already eaten the bread. It is very illogical for someone to return without the product and request a return. To which I, precisely, told him that we could not return him because he no longer had the product and that it was not a correct action (and) that we were willing to continue serving him if he required another product, “said the entrepreneur.

The business has gained popularity among the inhabitants and tourists in Ataco. Photo EDH / Cristian Díaz

The tourist warned that he was going to turn to the police, so 15 minutes later he arrived accompanied by some agents.

“From there, everything that is in the video is known,” said Rivera, who was struck by the fact that an agent began to suggest the prices that he should sell the bread.

However, the Salvadoran pointed out that the product is not made by him; rather, he buys it from other entrepreneurs. Added to that, you must pay costs for the premises you rent, where there is also a store with basic necessities.

Rivera acknowledged that he does not stop feeling fear for the whole situation that was unleashed after the video; But all he did was defend his rights.

The questioned attitude of the backpacker

The situation has made the small bread business gain popularity among the same inhabitants and tourists who come to Concepción de Ataco every day.

“As Salvadorans, I see it well that we all defend ourselves among ourselves; If the man had his price, he fixes it well, give it at a certain cost, he has to keep himself and not just because a foreign person comes down to it. The truth was I was very admired when I saw the video and I said how could that be? Very good for the Lord ”, said the Salvadoran tourist Diego Polanco.

Some people who travel by vehicle pass by saying hello to Rivera; while others arrive and ask him if he is the man of the video or the “video of bread”.

This phenomenon has caused profits to increase by 50%.

“We have seen the support that the population has been giving us; even, local people have been coming, buying us and that has driven us a lot. It wasn’t the way to get famous; but unfortunately that was the way the circumstances were. I never wanted to damage anyone’s image; but the circumstances happened like that ”, expressed the Ahuachapaneco.

He added that he carried out the procedures to be benefited by Bandesal, but that his request for support was denied.

The entrepreneur appreciates the support:

Eric Rivera, the Ataco entrepreneur who publicly denounced backpacker Timmy Karter for harassing him after not wanting to pay for a $ 1 sweet bread, received financial support from citizens. Video: Illustrative and non-commercial image https://twitter.com/EderEsquivel/status/1403877015065960449

Last Friday it was announced that the company had applied for a postponement of payment. That is in most cases the prelude to bankruptcy. Over the past weekend, administrator Gerard Breuker of Dorhout Advocaten was informed by the management about the situation at Centraalstaal.

After talks on Monday morning with management, the works council and people from investment company Nimbus, it was decided in consultation with administrator Breuker to pull the plug.

“There is no prospect that the creditors will receive payment from the situation in which the company currently finds itself,” says Breuker.

Even before the bankruptcy was filed, parties had already reported to Breuker that they wanted to take over Centraalstaal. The administrator is positive about that interest. ‘The parties show strategic interest’, says Breuker. ‘They are not buyers who are only in it for financial reasons.’

Centraalstaal supplies steel construction kits to shipyards in the North, among others. The company thus plays a pivotal role in the regional shipbuilding industry. There the loss of the company is therefore seen as ‘a loss’.

Administrator Breuker also says: ‘In the chain, great value is attached to continuity at Centraalstaal.’

Breuker does not want to say which parties are interested in Centraalstaal. Nothing can yet be said about the conditions under which a possible takeover can take place, for example whether Centraalstaal will continue in its entirety or in a slimmed-down form and with fewer employees.

Centraalstaal is part of the Central Industry Group, which includes eight other companies that are active in shipbuilding. CIG itself went bankrupt in 2016, after which it was bought by investment company Nimbus in Zeist. Via Nimbus, the Groningen businessman Rolf Braun, among others, participates in CIG.

Braun refers to Nimbus for comment, but they do not want to go into the situation at Centraalstaal.

Administrator Breuker expects that investor Nimbus will want to divest Centraalstaal. According to Breuker, the consequences for Nimbus are therefore limited to the financial losses due to the bankruptcy. Breuker now estimates that the other CIG operating companies will not experience any further adverse effects.

If you want to build a ship now, you pay the grand prize

In recent years, Centraalstaal has had great difficulty keeping its head above water. After the bankruptcy of CIG under the wings of Nimbus, the company was unable to close a single year positively.

The shipbuilding kits supplied by Centraalstaal consisted of cut and preformed metal parts and plates. The fact that sales did not go well was mainly due to the sharp increase in competition from companies that cut steel to size. Even though the Groningen company maintained a strong position in bending work.

According to Breuker, the sharply increased steel price also dealt a hard blow to Centraalstaal. Steel has roughly doubled in price during the Covid crisis. Administrator Breuker: ‘If you want to build a ship now, you pay the top price. Orders are not forthcoming because shipyards are waiting to place them.’

Centraalstaal was set up by a number of northern yards that wanted the production of steel packages more efficient and cheaper. Until then, the yards often did the cutting and bending of steel parts themselves.