As has only now become known, there was a racist attack on a 21-year-old student on Saturday three weeks ago at the Odeonsplatz underground station. On September 19, shortly before midnight, the young man was waiting on one of the seats on the platform for his subway when he was approached by two strangers. The men asked him to vacate his seat; one insulted the student from Tunisia as “fucking Arab” and pushed him away. The second hit him in the face with his fist. When the U 5 in the direction of Neuperlach Zentrum entered, the two perpetrators got on and drove away.

The student could only adequately describe one of the two attackers to the police; He is said to have been between 20 and 30 years old, had short, black hair that was shaved on the back and sides, and a three-day beard. He wore a baggy jacket with a zipper and a large, red and black check pattern, black jeans and beige sports shoes. The police are looking for witnesses. The commissioner responsible for politically motivated crimes took over the investigation some time later. As an explanation, the police said that the racist background was only recognized late.

The Greens are urgently requesting a reorganization of the street space in the center – at least in the Corona period. Other cities have already responded accordingly.

If the inner-city “Gewurl” is not part of Munich’s intangible cultural heritage, then at least the grumbling about it. Nobody has to do without the usual slalom completely, even in the almost ghostly empty center. After all, there would still be increased cycling and distance rules. Reason enough for the district committee Altstadt-Lehel to discuss corona-compatible traffic concepts, one last time in the expiring term of office and in an emergency staffing reduced to five members.

The Greens had given the impetus with an urgent request. Accordingly, the BA should ask the city council “to deal promptly with the temporary reorganization, limited to the duration of the pandemic, and possible rededication of the street space”. Since motorized inner-city traffic in particular has decreased significantly since mid-March, the city could allocate more space to cyclists and pedestrians for the purpose of quality of stay and safety. According to the Greens, there is no shortage of international role models: Brussels has transformed the entire city center into a huge pedestrian and bicycle zone, and speed 20 applies to vehicles with a special permit.

Berlin and other German cities create so-called pop-up cycle paths, i.e. temporarily mark new cycle lanes on the road. Vienna has temporary meeting areas (“shared space”) that share road users on an equal footing, based on mutual respect. Even metropolises that are currently heavily tested, such as Milan or New York, are planning similar redistributions, the text of the application says with abundant references. The city council plenary should take care of the matter quickly, “not in four months,” Andrea Stadler-Bachmaier, spokeswoman for the Greens, said with promising ambitions for the future BA chairmanship.

The groups were not too far apart, but Wolfgang Püschel (SPD) and Stefan Blum (CSU) saw the matter better with the district administration department (KVR) than with the city council and advocated that the BA should come up with concrete, quickly implementable street suggestions contact the administration directly. From Püschel’s point of view, a comprehensive concept would have to be discussed with the citizens beforehand. It was also not too urgent, since large parts of the old town and the Lehel had de facto become a meeting point by themselves. Blum estimates that the matter will drag on until Christmas, according to the city council. On the other hand, the KVR, in consultation with the police, could organize short-term reclassifications within days, as is always the case on construction sites.

After a short discussion, Stadler-Bachmaier, Püschel, Blum, the outgoing BA chairman Wolfgang Neumer (CSU) and Marlene Lessel (FDP) agreed on the request to target only the Isar cycle path and the Steinsdorf- / Widenmayerstrasse axis for a short-term reallocation take as well as the north-south crossing through the old town via Alfons-Goppel-, Falkenturm-, and Sparkassenstraße, Viktualienmarkt and Oberanger.

There is a separate cycle path on the Isar, but it is already narrow during normal times, especially by fast cyclists. Alfons-Goppel- and Sparkassenstraße are already designated as bicycle streets, but the right of way does not create more space either. The easiest way to clear it on both axles is to block parking spaces. BA boss Neumer indicated that this did not meet his wishes, but voted in favor of the compromise with a view to the goals of the new town hall alliance and the new majorities in the committee. 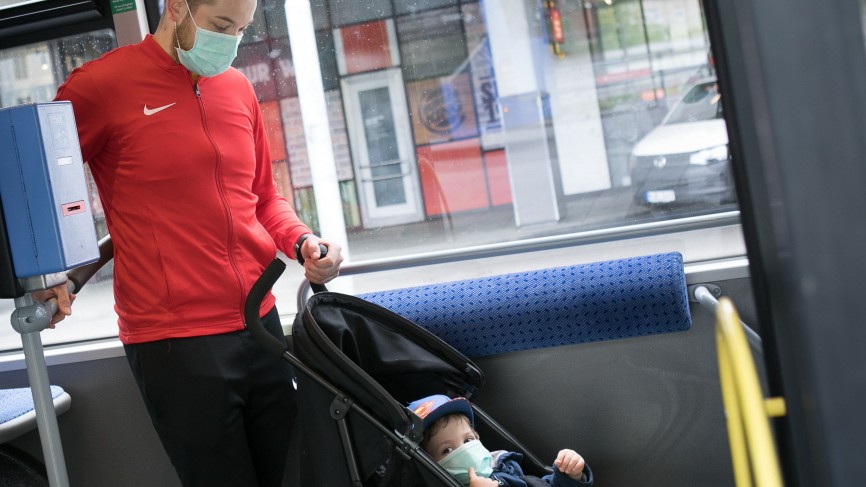 The Munich transport company wants to advertise the wearing of masks, because checking is “an impossible thing”. The city center traders, on the other hand, are looking forward to the gradual opening.

In the tram on line 18, a man in his fifties was strolling in his wooden seat. With his streaked jeans legs he seems to mark his territory, and with his light blue mask on his face he looks somehow superior. In a way, it is: ten people sit on the tram, all at a distance, but he is the only one who wears a protective mask. This is exactly what is now becoming a duty: On Monday, Prime Minister Markus Söder (CSU) announced that Bavaria would introduce a mask requirement in public transport and in all shops from next week. So the man in the tram is prepared.

In these Corona times, there is usually so much space in the tram, bus and subway that hardly any people in Munich get too close. Even in front of the few open shops in the old town, there is neither jostling nor too close contacts. In front of the Ringlers in Sendlinger Straße there are people who buy their lunch there at two-meter intervals, but nobody is masked here on Monday afternoon.

How Prime Minister Söder’s announcement is to be implemented remains to be seen. The Munich Transport and Tariff Association MVV had already “urgently” appealed to passengers last Thursday to wear mouth-nose protection on buses and trains. MVV Managing Director Bernd Rosenbusch said: “Protect yourself and others and wear a cover for your mouth and nose, also sewn yourself or in the form of a bandana.”

But for the Munich transport company MVG it is “a thing of the impossibility” to also check the mask requirement. “It is the responsibility of the passengers to wear a mask,” MVG spokesman Matthias Korte said. The transport company only has the appeal to pay attention to the current offer and to comply with the obligation from next week. Because there are “no additional resources available” to check whether the mask is mandatory or to reject passengers.

Although it is conceivable that in future buses, trams and subways will address individual passengers to the requirement to wear a mask, a massive check is difficult to imagine given the fact that there are 100 subway stations and more than 1,000 stops. Korte also points out that Munich’s transport operations should remain as stable as possible even in Corona times. “We have only reduced our timetable offer selectively so that the passengers have space and can keep as much distance as possible.”

“We will fire from all tubes to appeal to the personal responsibility of the passengers.”

The MVG therefore wanted to keep a close eye on the development of passenger traffic in the coming days, especially if school operations are to be started up again slowly in the coming week. In the past few days, there were apparently fewer than 100 people traveling per subway, which was sufficient for the distance control. In pre-Corona times, it was 800 to 900, said Korte.

From this Tuesday, the MVG still wants to massively promote the wearing of masks, then posters should also point this out in subway stations and other stops. “We will fire from all tubes to appeal to the personal responsibility of the passengers.”

The city center traders, on the other hand, are already looking forward to the gradual opening of the shops. “All companies that want to open next week have got masks,” said Wolfgang Fischer, spokesman for the City Partner dealer initiative. These are primarily intended for store employees, but he assumes that they will also be available to customers. Fischer sees the careful opening of economic life as a “sign of hope in the right direction”.

He has also seen for himself that some retailers who have already opened have in some cases developed “witty low-tech solutions” for their customers in order to minimize the risk of infection. However, Fischer made “an urgent request” to politicians to make partial openings of large stores possible soon and also to think of Munich’s gastronomy. Because if there were shops open but no bars, not many people would come to shop, he fears.

Maybe wearing protective masks will help restaurants to open earlier. The Munich CSU faction called on Monday to set up several market stalls in the pedestrian zone where masks are sold. MVG is also considering selling masks in the future.

Masks in shops and mass transit – a good move?:Readers’ discussion