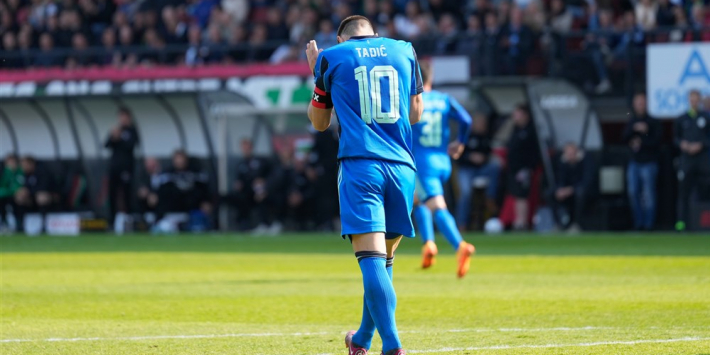 “Tadic must put ego aside”


29 april 2022 – If it is up to Arnold Bruggink, Dusan Tadic is no longer Ajax’s regular penalty taker. The Serbian captain killed three of his last six penalties in the Eredivisie. Ajax has a few specialists in-house who, according to Bruggink, could do better.

“Ten Hag should definitely switch,” Bruggink says to the General Newspaper† “In such cases, as Tadic, you also have to put your ego aside and do what is best for the team. When he took his run against NEC, you saw the doubt. He never took a penalty like that. Haller has been in the past. It turned out to be a certainty. He can also become top scorer in the Eredivisie, which is a motivation and a nice side effect.”

Coach Erik ten Hag was still asked about it last weekend, when Tadic missed from eleven meters against NEC. Was he going to switch? “I’m not going to make a decision about that right after the game. I know that Haller has a great average when it comes to taking penalties. A better average than Tadic too, that’s right,” the coach noted.

Haller always took the penalty kicks at FC Utrecht, where he turned out to be an ice-cold taker. He also regularly stood behind the ball at the German Eintracht Frankfurt. With Steven Berghuis, Ajax has another specialist in-house.