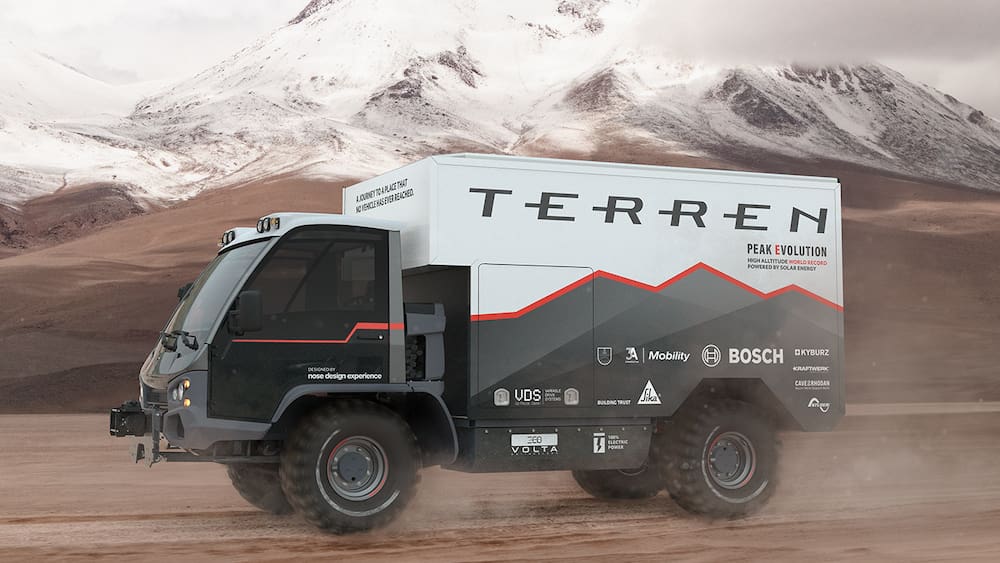 “We want a new world record for land vehicles!” We? These are the Engadine brothers Patrik (27) and David Koller (29) and their friend from the Unterland region, David Pröschel (30). In order for the three passionate mountaineers, bikers and skiers from Graubünden to do this, they have to go higher than the Guinness Book 6,688 meters above sea level, which two Chileans climbed 14 years ago with their modified Suzuki Samurai on the Ojos del Salado volcano. Our three Swiss summiteers also want to try their hand at this 6,893 meter high mountain, the highest active volcano on earth and the second highest peak in South America on the border between Chile and Argentina. Of course, not with a gasoline or diesel engine, which runs out of power in the thin air, but with a self-converted electric vehicle.

The active volcano Ojos del Salado is located on the edge of the Atacama Desert exactly on the Chilean-Argentine border. Because of the great drought, there is little snow on the 6,893 meter high volcano – the highest active volcano on earth. But the weather is often changeable and always very stormy.

What the three young Swiss can expect on the almost 7,000-meter-high mountain, they found out on their five-week exploration tour in January 2019. “The weather was very nasty and the air above was extremely thin,” says David Koller, who struggled the most with the extreme altitude. “But we now know that there is a navigable route that is not blocked by too large boulders and the gradient of which is within an acceptable range.” If everything goes as hoped and Corona no longer throws the trio through the bill, the expedition (www.peakevolution.ch) should start at the end of November and will take five months including crossings.

However, the three young adventurers are not only interested in the record on their expedition. Rather, with their spectacular “Peak Evolution” campaign, they want to prove that by developing an electric multi-purpose van in combination with photovoltaic on roofs in Swiss agriculture, especially in mountain regions, you can save massive amounts of money, protect nature and support Swiss work. To this end, they founded their start-up DDP Innovation two and a half years ago. “With the idea,” says mechanical engineer David Koller, “to develop a series-ready electric multi-purpose transporter for agriculture, including the infrastructure necessary for operation.” Brother Patrik, wood construction technician, adds: “Because it is difficult to sensitize the public, politicians and investors to the topic, we came up with our idea of ​​a height record.” Site manager Pröschel explains: “The knowledge gained from our adventure should flow into the optimization of our planned series vehicle.”

But every beginning is difficult. The innovative trio is also experiencing this. The planned conversion work on the Aebi VT450 Vario base vehicle is proving to be much more complex than expected. “We soon realized that we had to replace not just the diesel engine, but the entire transmission, including the control software,” says David Koller. Sobered, the three of them had to go through the books: The task is to find partners for the implementation. Not easy in itself and even more complicated with the outbreak of the corona pandemic.

There is no alternative to giving up: the trio persistently pursues their renovation plans. One finds the hoped-for partner in the Austrian company VDS Getriebe, which originally developed the transmission of the basic vehicle including software. She supports the three in building the new transmission and also provides a vehicle as a prototype. As one of the most important components, the Swiss battery manufacturer EvoVolta sponsors the battery with 90 kWh, specially made for use at extreme heights. In cooperation with the local companies Megasol (PV modules) and Studer Innotec (MPP tracker), the mobile solar system is being built to charge the battery of the expedition vehicle while on the move. And with Bosch, a well-known sponsor is providing the two electric motors and the inverter.

The expedition starts in November

Next week the inverter, charger and cooling system will be installed in the self-developed workshop in Sevelen SG on the expedition vehicle, which is now equipped with electric motors and a new gearbox. After the cabling of all drive components and assembly of the control unit and the signal lines as well as modifications to the cabin, the drive battery should be installed. “Because of Corona and worldwide delivery bottlenecks in the electronics sector, we are extremely shivering whether we can actually install the battery as planned in one and a half months,” says Patrik Koller. “If not, it’ll mess up the whole schedule. Then we would have to postpone the Chile adventure for a year and prefer test deployments in Switzerland. “

In order to receive an additional 75,000 francs for the project, the trio of adventurers is hoping for additional help from ongoing crowdfunding. “We’re well on our way,” says Patrik Koller happily. “We already have over 80 percent of the amount from over 200 supporters!” Now there are eight days to get the rest together. Sponsors wave exciting rewards in relation to the project, promises Koller. Participate? Click here for crowdfunding: https://wemakeit.com/projects/alpen-tesla.

But as is well known, hope dies last. So the trio remains optimistic that it could start with the first driving tests from mid-October. If it then works with the official road approval, the end of November will set off as planned for a world record attempt in Chile. After their expedition, the three innovative young entrepreneurs want to start the test phase of their agricultural vehicle converted to electric drive in mid-2022 and then with its market launch.