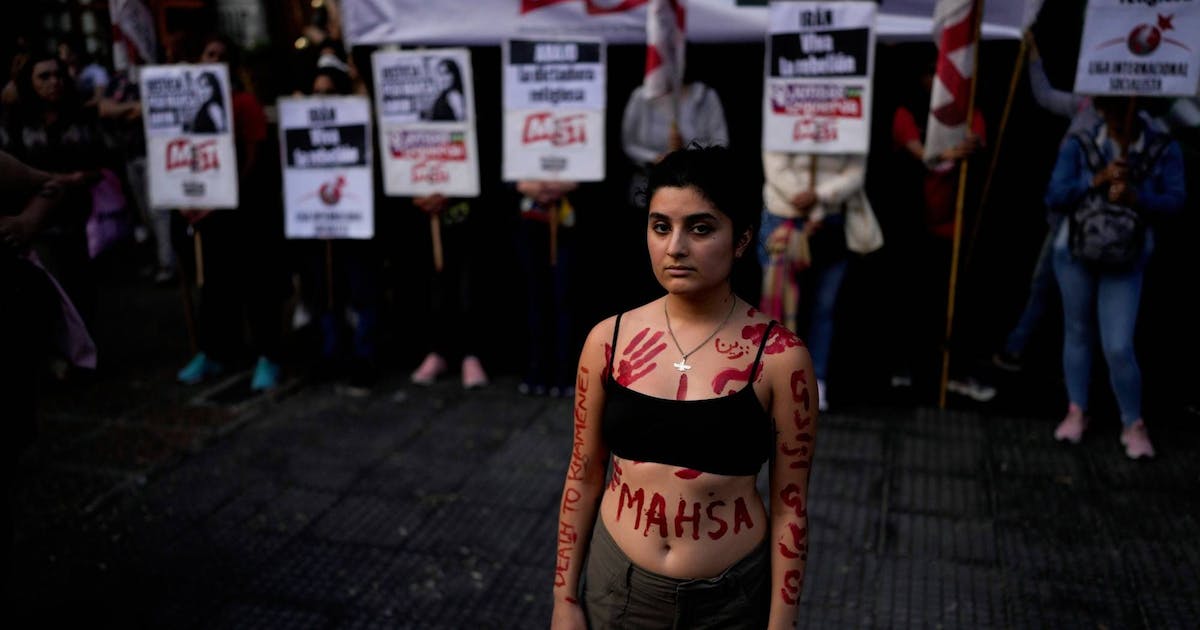 Global protests against the death of Iranian Mahsa Amini continue

The protests after the death of the Iranian Mahsa Amini continued on Tuesday. Protesters burned pictures of Ayatollah Ali Khamenei, Iran’s supreme leader, outside the Iranian embassy in Athens.

Nilofar and Michael from Switzerland have been unable to establish a connection with Iran for days. The concern for her next of kin is great. Only the anger against the regime in Tehran is greater.

The couple Nilofar and Michael (names have been changed) live in Switzerland, but their thoughts are in Iran. Now even more than usual. Her family lives in one of the megacities, and there is great concern about their safety.

They haven’t heard from them for days, the regime blocking social media and the internet to prevent the serious unrest that has gripped the country since Masha Amini’s assassination from spreading. “I am usually in contact with Iran every day,” says Nilofar, “because my mother is very old.”

Who is she most worried about? “Especially around the young people. It is so cruel: women are grabbed by the hair. It’s being shot.” To a question awaiting the women being arrested, Michael calls out from the background: “Prison, rape, death.”

“Taken away and locked up”

Nilofar herself has not been in her old home for some time. “I have been active on Facebook, Twitter and Instagram for six years,” she explains. “I watch a lot of news and write my opinion. Since then I have been afraid to go to Iran.”

The Song of Resistance #Iran with German subtitles. It sounds in all cities. People sing for a better world, for sisterhood, for an end to gallows and stoning.
Video excerpt from the ARD documentary “With flying hair against the mullahs”.#IranProtests2022 pic.twitter.com/1m9zEODuFq

According to Nilofar, anyone who enters the country is carefully checked: “There are body searches, bags and mobile phones are searched. If you want to fly to Iran as a born Iranian, you need a valid Iranian passport in addition to the Swiss passport. To obtain or extend one, one must first obtain and sign a document from the consulate stating that one agrees with the regime. Because I am not, I refrain from traveling to Iran.”

The religious police punish “every little thing”, says Michael: “The complaints are often trivial to us.” He reports on a walk on the Persian Gulf – on the Iranian Cote d’Azur. “When we got off the beach, my wife rolled up her jeans a little because we were walking through the sand. We had barely left the beach when the police came and hissed at my wife to roll down her pants and put on her shoes.”

It sounds like small things, but it shows how the regime works, says Michael. The country is beautiful, the people wonderful. “But they are afraid: They are unarmed in the face of a brutal torture regime that can do whatever it wants with anyone. Girls are taken off the streets for no reason. You will be captured. At best they get a beating, at worst they are raped and disappear never to be seen again.”

Nilofar’s husband was in Iran seven times between 2010 and 2017. “When I first came to Iran in 2010, I exchanged money on the street for 1 euro 12,800 rials. The last time I was there in 2017, it was already 200,000 rials.” The sanctions will be useless, says Michael: The middle class and the lower classes will suffer the most. “The rich can get everything – in Iran itself as well as outside.”

“When Hassan Rouhani was elected in 2013, there was great hope among the people that the system would become more tolerant,” says Nilofar. “It also seemed to moderate. But over the past five years, the regime has become increasingly brutal. Today it has nothing to do with the people.” Although of course not everyone is against the regime.

“You have to assume that about 20 percent support the regime,” estimates Michael. “There is also a large apparatus with many security and police forces as well as paramilitary groups. They all benefit from the mullahs’ system. They help keep the regime in power for money.”

Michael wishes the West would do more against the pillars of the system. He is annoyed that members of the regime and collaborators let their children study abroad or can transfer their money there. “It hurts your soul when you see how the population lives on a subsistence level.”

“Millions will have to stand up for this”

Nilofar also wants a tougher stance on Tehran. Also from Bern: “In July 2018, the Iranian president Hassan Rohan visited Bern. I watched it on TV and was very annoyed: I would wish that Switzerland would not sign any contracts with the regime.”

Following ongoing protests in Iran, the country’s president called on the security forces to take decisive action against the protesters.

She is sure that if you sign contracts “with such people, with Vladimir Putin or Nicolas Maduro”, you will strengthen the power of these dictatorships. Could the regime fall over the new unrest? “If these protests were to increase in all cities, the surveillance state would be paralyzed,” reflects Michael.

But: “Millions will have to stand up for it. And if the regime in the big cities of Tehran, Isfahan and Mashhad can hold its ground and even push people back, the resistance will quickly collapse again. It depends on the mass of Iranians.”