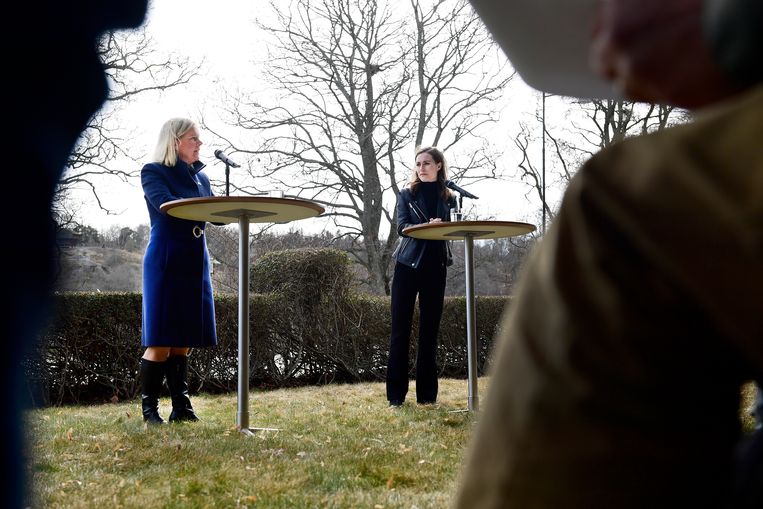 All his adult life Daniel Suhonen (43) agitated against Swedish NATO membership. The columnist, a prominent member of the ruling Social Democratic party and founder of the influential think tank Katalys, like many party members, cherished Sweden’s military independence, which has lasted more than two hundred years.

He also warned against provoking Russia. “Pushing NATO to Russia’s borders – which would happen if Sweden and Finland joined – is unnecessarily adding fuel to the fire,” he wrote in the newspaper in 2015. Expressen† “Russia may be a rogue state, but it’s a country with a perfectly understandable logic that feels like a wounded bear whose nest is being invaded.”

But for many Swedes, there is a world before and after February 24, the day the Russians invaded Ukraine. That is why there is a lot of discussion on television and in the newspapers about whether Sweden should join NATO after all. The invasion also marked a turning point for Suhonen. ‘I was on the night train to Stockholm and woke up early in the morning to the news. It felt like 1939. It was then that I realized that the security order in Europe had changed.’

The last time Sweden went to war was in 1814. Even during the Second World War, it managed to stay aloof. The Swedes still cherish their military self-determination. That feeling was reinforced during the 1960s, when Social Democratic Prime Minister Olof Palme strongly criticized the US war in Vietnam. Sweden clearly had no business in a military alliance led by the United States.

The vulnerable position of the also alliance-free Ukraine has drastically tilted sentiment, including at Suhonen. “The reality is that if Russia turns against us, we cannot defend ourselves. During the Cold War we had a strong army with a large air force. We had conscription. But we have dismantled all of that since the 1990s.’

Moscow has never made it a secret that it abhors a Finnish and Swedish membership. The connection of Finland brings NATO directly to the 1,340 kilometer border with Russia. In recent weeks, Moscow threatened with ‘political-military consequences’. “Everyone knows where it will lead,” a spokesman for President Putin said without further explanation.

The Swedish army command says it takes all scenarios into account. “We do not rule out military force,” General Michael Claesson said. What about Suhonen’s belief that Russia is a “wounded bear” not to be provoked? ‘Before the war, we could live with the threats, because Russia adhered to the existing order. Now it has invaded another country. The risk of being attacked by staying outside NATO now seems greater to me than provoking Russia by joining.’

“There is nothing to defend what Russia is doing now against Ukraine. The world has changed. Then we who work in the world must do the same, even if the phantom pains of a worldview, an order one has learned to live with can be very difficult.” Says yes to NATO. https://t.co/IQAQF5khqh

A majority is also emerging in the Swedish parliament. Although it is not yet a large majority, because the ruling Social Democrats are divided. There is a heated debate within the party. The yes camp seems to be winning, but the resistance is tough, Suhonen sees. The bearded historian from Stockholm was previously a speechwriter and advisor to party chairman Håkan Juholt and knows the party well. “Normally I’m on the left flank, but on this subject, I’m suddenly in the middle. I have been approached a few times by angry party members in the street. They think I’m making a big mistake. I understand, many of them have thought the same for decades.’

The arguments of the no camp mainly focus on the role of the US, by far the most powerful country in NATO. Will Sweden not be dragged into an American conflict against its will? And as a declared opponent of nuclear weapons, should the country ally itself militarily with nuclear powers? Suhonen: ‘I used to use these arguments too, but it’s a bigger problem that we can no longer defend ourselves. In addition, we have been close to NATO for years. They can practice here and we share intelligence.’

Initially, Prime Minister Magdalena Andersson also defended the classic position. Joining now would further destabilize this part of Europe. The best thing is that we have consistent and predictable policies,” she said two weeks after the war started. She came back to that later. During a press conference with Finnish Prime Minister Sanna Marin, she said that the security situation had changed radically and that Sweden needed to make a new analysis. Her Finnish colleague was more adamant. In Finland, a large majority of parliament is in favor of joining NATO.

Suhonen: ‘She is relatively new as prime minister and it is not surprising that she initially opted for the existing party line. Last November, the party congress passed another motion against accession. We don’t choose NATO because we want to. In a way we are forced, because Finland has already made the choice.’ Sweden and Finland cooperate closely on defense matters. This cooperation will become more difficult if Finland becomes a NATO member and Sweden does not. Moreover, it puts the Swedes in an isolated and therefore vulnerable position. “If we don’t follow Finland, you run the risk that Russia will try to influence us. That can be done in all sorts of ways.’

A single social-democratic parliamentarian has already announced that he will vote against. According to Tomas Krohnstål, Sweden’s pacifism is ‘the backbone of the party’. Many others say they are waiting for the cabinet’s security analysis. Suhonen thinks most of them are waiting for a decision from Prime Minister Andersson, who has been busy in recent weeks to rally support from NATO member states. ‘A majority of the population wants it and there is also a majority among party members, especially if Finland becomes a member. As soon as Andersson announces it, they’ll all come along.”