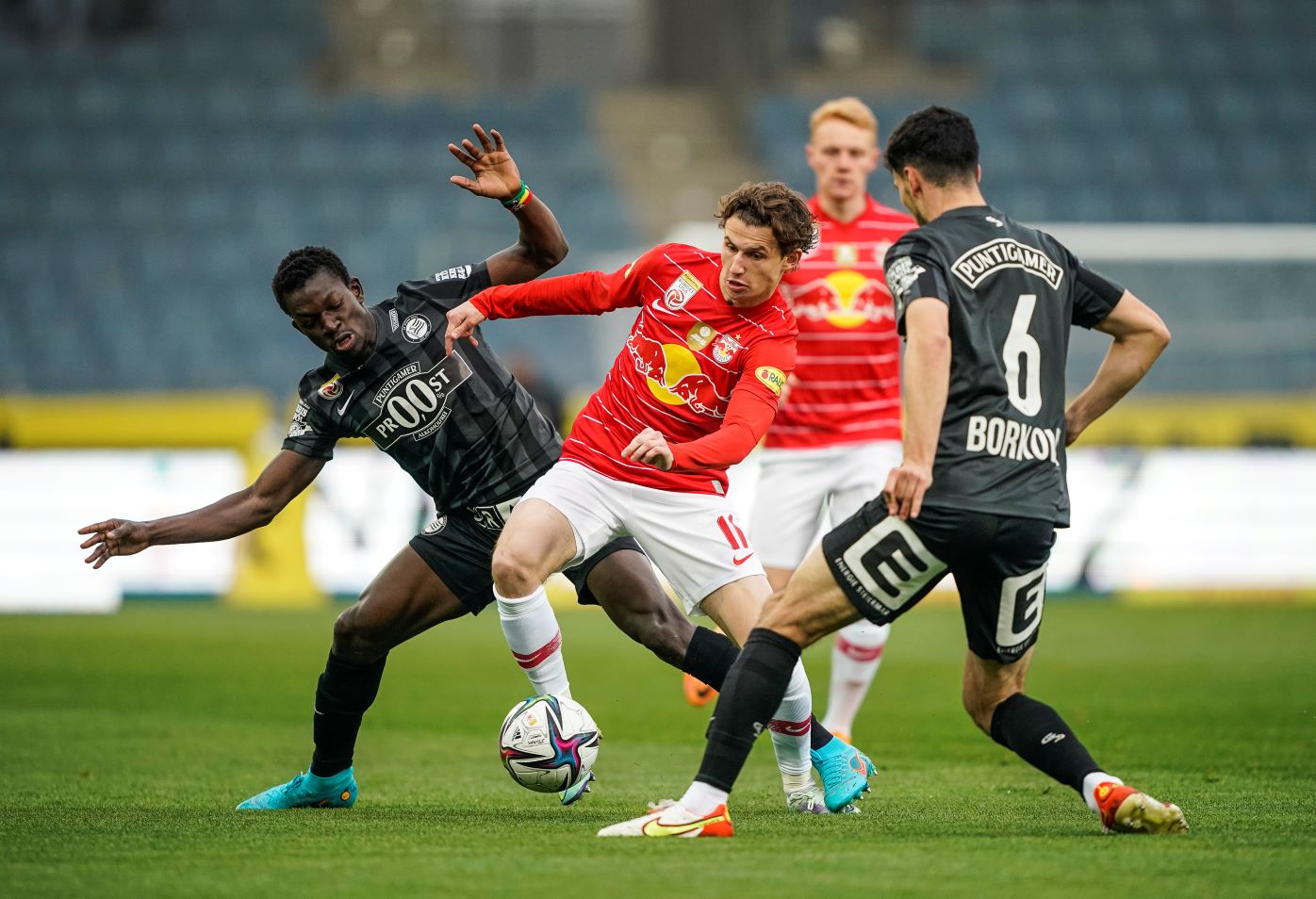 Summit meeting in Graz: Second SK Sturm Graz vs. leader & subscription champion FC Red Bull Salzburg. Before the 29th and fourth-to-last round of the ADMIRAL Bundesliga, both teams were separated by 14 points – after that 11. Despite serious personnel changes in the starting eleven, both teams delivered a lively Wednesday match from which one stood out: the former Salzburg top scorer Jakob Jantscher. Chose the right (“Jakobs”) way twice. Once with an assist to make it 1-0, then with a 2-1 winning goal. Failed dress rehearsal for the Bulls before the ÖFB Cup final and first league defeat in 2022.

Missed the big chance for a 2-1 lead: the agile US boy Brenden Aaronson, here against Alexander Borkovic, who was born in Vienna. The player on loan from TSG 1899 Hoffenheim II only made his second start this season, the first also against the Red Bulls (in October).

The exciting question was: with which personnel will both teams go into the game? Due to injuries and suspensions, Sturm had six regular players to choose from. At RB Salzburg, after the championship title that was already fixed early last Sunday, the celebrations and the upcoming ÖFB Cup final next Sunday against SV Guntamatic Ried, rotation was expected.

5 changes in Sturm, equal to 7 in Salzburg

The Red Bulls made seven changes to their starting XI due to suspensions, injuries and rest. Defenders van der Brempt, Piatkowski and Bernardo rotated in for Kristensen, Solet and captain Ulmer. Capaldo and Kjærgaard came on in midfield for Sučić and the suspended Camara and this time Adamu Junior/Šeško acted as a storm duo for the injured Adeyemi/Okafor.

“Both teams didn’t line up as expected, but it will still be a top game,” said the 34-year-old Salzburg coach Matthias Jaissle before kick-off. After which the Red Bulls immediately launched an attack, but Benjamin Šeško’s powerful shot after just 80 seconds was too central and safe “prey” for Sturm goalkeeper Siebenhandl.

MATCH WINNER! Successful “Jakobs Weg” in the summit meeting! Jakob Jantscher (left) and his high balls… the 33-year-old, who was born in Graz and ex-Salzburg, delivered his 15th assist with the free-kick ball for a 1-0 lead – a record! And then scored his 12th goal of the season! On the right is 21-year-old Pole Kamil Piatkowski, who was once again able to prove himself in the Salzburg starting XI.

At the other end, Manprit Sarkaria tested keeper Köhn with a low shot (11′), before Graz took the lead – again after a standard ball. The top assistant in the league – Jakob Jantscher – circled the ball from the left with a free kick with the right on the head of Lukas Jäger, who completed his first goal of the season in front of Maximilian Wöber (14th). Salzburg in this scene in air flight only “passengers”. Another goal for Jäger after 14 months: back in February 2021 also against RB Salzburg.

The Red Bulls responded: Capaldo put in a fine cross with his right instep from the right, but Junior Adamu in the center of the penalty area narrowly missed the goal from Graz with his direct ball (19′). Both further released, refreshingly showing off and with their visors open. Nicolas Capaldo again, returning after a knee injury, ambitious on the right and with the sharp cross, which Junior Adamu missed on the first pole, but the 18-year-old Slovenian Benjamin Šeško was there on the back pole and effortlessly converted to his 5th goal. Goal of the season (22nd).

One of the most striking players in the 1st half: Nicolas Capaldo. The 23-year-old Argentinian made a comeback on the right flank.

While Salzburg usually came dangerously from the right and Capaldo, Sturm proved his free-kick qualities. Again Jantscher precise on captain Hierländer, who just missed the long post with his header on the left side of the penalty area (29′). Although both remained willing to attack, the defensive lines no longer allowed any significant chances – both teams neutralized themselves until the break.

After the restart, Stefan Hierländer fired the first warning shot, the Graz captain’s right-footed shot from a central position and 18 meters just missed the left post (60′). While RBS coach Matthias Jaissle made a triple swap and “job sharing”. Brenden Aaronson then had a mega-chance, who was set free from the right in the penalty area, but just before Siebenhandl (70′) his lob failed at the Sturm goalkeeper and he was no longer able to control the ball on the follow-up shot.

In return, Jakob Jantscher was different, who picked up a pass from Stefan Hierländer against the deficit of the rest of Salzburg’s defense and hammered the ball into the net from the inside left in the box (71′). Piatkowski threw the veteran’s left-footed shot and unluckily deflected it for keeper Köhn.

Salzburg braced themselves against the first league defeat in spring. Substitute Šeško with the top chance of equalizing failed half-left in the sixteen alone in front of Siebenhandl at the “Grazer Teufelskerl”, who parried with a “big save” (77th). Then Diangbo, who was also substituted on, pulled from the “second row”, the The ball hissed just past the right (82nd).

Otherwise, the Ilzer-Elf defended well in the final phase, in which Salzburg are known for many goals, and, in addition to the 15th win of the season, secured the runner-up title before the remaining three rounds.

What a successful season and above all the Styrian series so far in the master group: 5 wins, 1 draw, 1 defeat (unlucky with 0:1 at the start in Salzburg)! After five defeats in a duel with the Bulls, a storm win again, along with the fifth home win in a row – home power Sturm Graz!