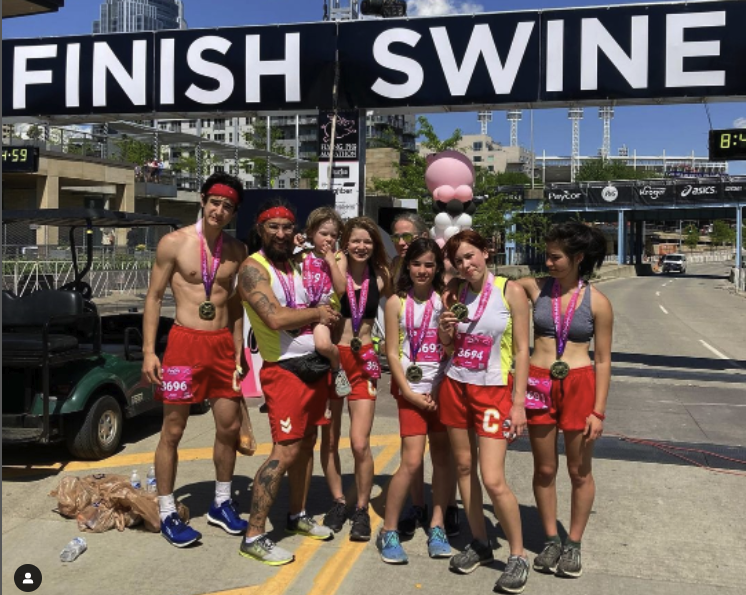 The YouTuber parents of a six-year-old boy face strong criticism from various sectors to run a marathon of more than 42 kilometers with their six children in the city of Cincinnati, United States.

Ben and Kami Crawford spent May 1 with six-year-old Rainier and their five other children at the Flying Pig marathon, 26.2 miles, and shared photos and videos. The negative reaction was immediate on social networks and even child protective services visited the family to conduct an investigation into what happened.

The family shared a photo on Instagram in which the boy is being questioned by an official, who later also he interviewed the couple’s other children, with Ben and Kami, and with the grandparents.

“This is a scary process because usually heChildren are interrogated away from parentsagainst your will, and your answers determine the legal right of the agency to take the children“, the parents wrote on their Instagram page.

Although the race has a published minimum age of 18, the organizers made a special exception for the Crawfords, who set the record in 2018 for the largest family to hike the Appalachian Trail.

Rainier completed the marathon in 8 hours and 35 minutes. But according to a post on the family’s Instagram, Rainier he was “crying” and “physically struggling” To the end.

One photo shows the family crossing the finish line hand in hand.

The post that generated the most outrage was Rainier holding a Pringles box in the food store. The couple wrote in the caption that their son was “struggling physically and wanted to take a break and sit down every three minutes“. It took seven hours to get to mile 20, where there are usually Pringles for the runners, but they were not and that was what the child had been waiting, they said.

“I was crying and we were moving slowso I told him I’d buy him two…if he kept moving,” the post reads. “I had to promise her another one so she’ll be in the family photo at the finish line. I paid him today,” the post reads.

The executive director of the race, Iris Simpson Bush, assumed “full responsibility” for the decision to allow the 6-year-old boy to run and assured that “not the best course of action“. He added that the permission was given because Ben Crawford and lhis family members had run the race unofficially in previous years.

“This decision not taken lightly“, He indicated and added that “the father was determined to make the race with his young son despite everything. Our decision was thought to give some security and protection to the child”.

critics of the couple included Olympic runners who expressed concern for the child’s physical and mental well-being.

Lee Troop, an Olympic marathon runner from Australia, was one of many who raised concerns about Rainier.

“Race organizers allow a 6-year-old to run a marathon. Child who stops every 3 minutes after 20 miles, crying and emotionally distressed. parents bribe him for it to finish and you’ll get Pringles. Parents see no problem in allowing this to happen. Everything about this is wrong!Troop wrote on Twitter.

The Crawfords replied with a message stating that Rainier was jumping on a trampoline and asking to run a half marathon the next day..