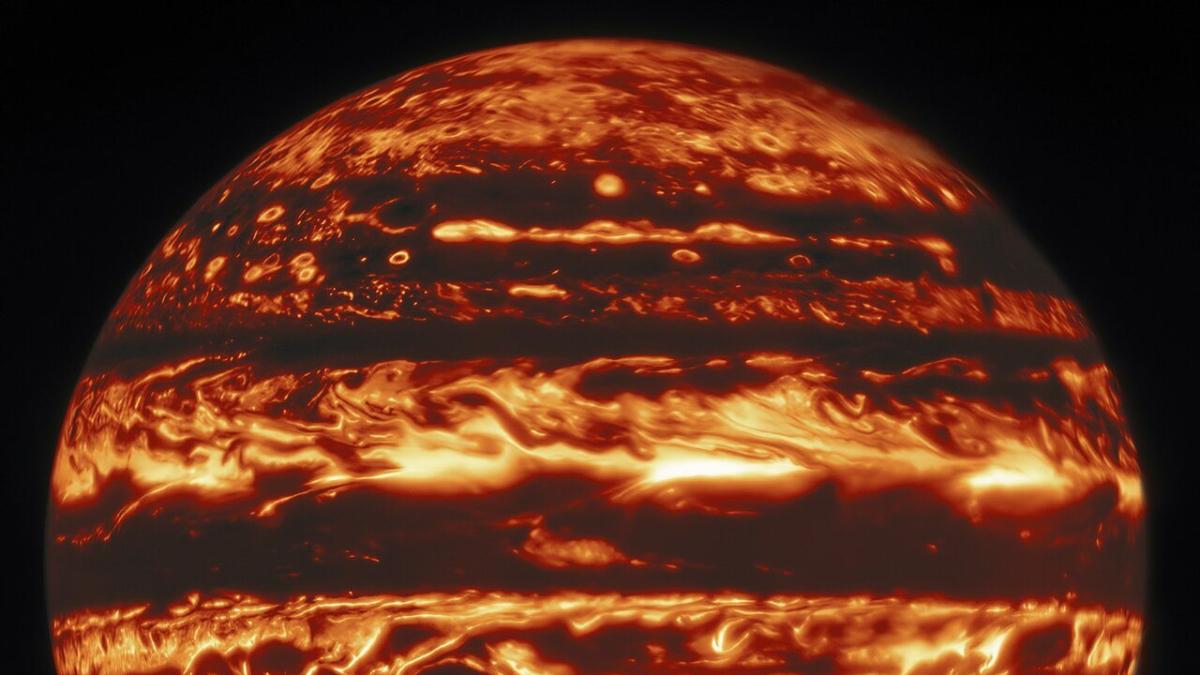 The upper troposphere of Jupiter It is the layer of the atmosphere where the giant planet’s weather occurs and where its characteristic colored striped clouds form. And, as we recently learned, scientists have completed the longest study ever conducted to track temperatures in this area.

The work, carried out over four decades uniting data from NASA spacecraft and observations from ground-based telescopes, found unexpected patterns in how temperatures in Jupiter’s belts and zones change over time. The study is an important step toward better understanding what drives the weather on the largest planet in our solar system, and eventually being able to forecast it.

Jupiter’s troposphere has a lot in common with Earth’s: it’s where clouds form and storms churn.. To understand this weather activity, scientists must study certain properties, such as wind, pressure, humidity, and temperature. They knew from NASA’s Pioneer 10 and 11 missions in the 1970s that, in general, the coldest temperatures are associated with the lighter, whiter bands on Jupiter (known as zones), while the cooler, reddish-brown bands dark belts (known as belts) are locations of warmer temperatures. temperatures.

But there weren’t enough data sets to understand how temperatures vary over the long term. The new research, published on December 19, 2022 in Nature Astronomy , breaks new ground by studying images of the bright infrared glow (invisible to the human eye) rising from the warmest regions of the atmosphere, directly measuring Jupiter’s temperatures above the colorful clouds. The scientists collected these images at regular intervals in three of Jupiter’s orbits around the Sun, each lasting 12 Earth years.

In the process, They discovered that Jupiter’s temperatures rise and fall following definite periods that are not tied to the seasons or to any other cycle that scientists know of.. Because Jupiter has weak seasons (the planet is tilted on its axis by just 3 degrees, compared to Earth’s roaring 23.5 degrees), scientists didn’t expect to find temperatures on Jupiter varying in such regular cycles.

“That was the most amazing thing of all,” said Glenn Orton, principal research scientist at NASA’s Jet Propulsion Laboratory and lead author of the study. “We found a connection between how temperatures varied at very distant latitudes. It’s similar to a phenomenon we see on Earth, where weather and climate patterns in one region can have a noticeable influence on climate elsewhere, with patterns of variability apparently ‘teleconnected’ over vast distances through the atmosphere. “.

The next challenge is to figure out what causes these cyclical and seemingly synchronized changes.

“We have solved one part of the puzzle now, which is that the atmosphere shows these natural cycles,” said co-author Leigh Fletcher of the University of Leicester in England. “To understand what drives these patterns and why they occur on these particular time scales, we need to explore both above and below the cloud layers.”

Over the first two decades of the study, Orton and his teammates took turns traveling to those observatories, gathering the information about temperatures that would eventually allow them to connect the dots. (In the early 2000s, some of the telescope’s work could be done remotely.)

Then came the hard part: combining several years of observations from various telescopes and scientific instruments to look for patterns. Joining these veteran scientists in their long-running study were several undergraduate interns, none of whom had been born when the study began. They are students at Caltech in Pasadena, California; Cal Poly Pomona in Pomona, Calif.; The Ohio State University in Columbus, Ohio; and Wellesley College in Wellesley, Massachusetts.

The scientists hope the study will help them predict the weather on Jupiter, now that they have a more detailed understanding of it. The research could contribute to climate modelling, with computer simulations of temperature cycles and how they affect climate, not just for Jupiter, but for all the giant planets in our solar system and beyond.

“Measuring these temperature changes and periods over time is one step toward finally having a complete weather forecast for Jupiter, if we can connect cause and effect in Jupiter’s atmosphere,” Fletcher said. “And the even larger question is whether we can one day extend this to other giant planets to see if similar patterns appear.”