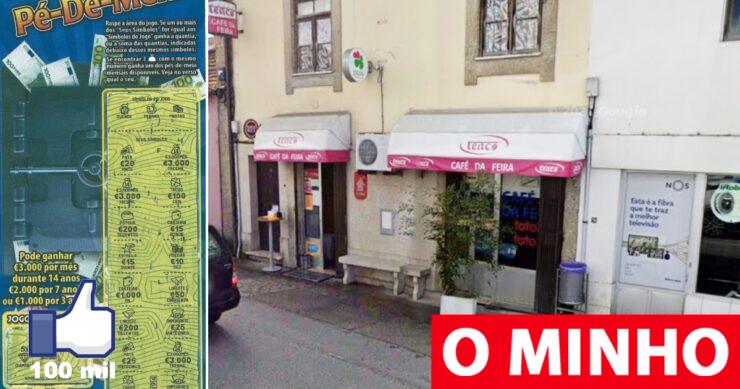 A man saw his great luck come out this Monday, in a cafe in Viana, after having bet ten euros on a Mega Pé-de-Meia scratch card. He won a total of 504 thousand euros which he will receive over the next 14 years.

Armando Coelho, owner of the Café da Feira, located opposite the EN 308, in Barroselas, municipality of Viana do Castelo, told O MINHO that the happy gambler is not a regular customer, but decided to stop for a coffee and bet on a scratch card, gesture that earned him half a million euros (and a few more change).

“He was awarded the prize of 3,000 euros per month, for 14 years”, revealed Armando, adding that this was the biggest prize of Jogos Santa Casa to be awarded at that establishment.

“Last year we gave a prize of 35 thousand euros in a scratch card, but it can’t even be compared with this one”, considered the manager of that restaurant space.

He also says that the man shaved, saw that he won, and called him aside, as discreetly as possible, to give an account of what had happened.

Now, you will have to activate the prize at the headquarters of Jogos Santa Casa.