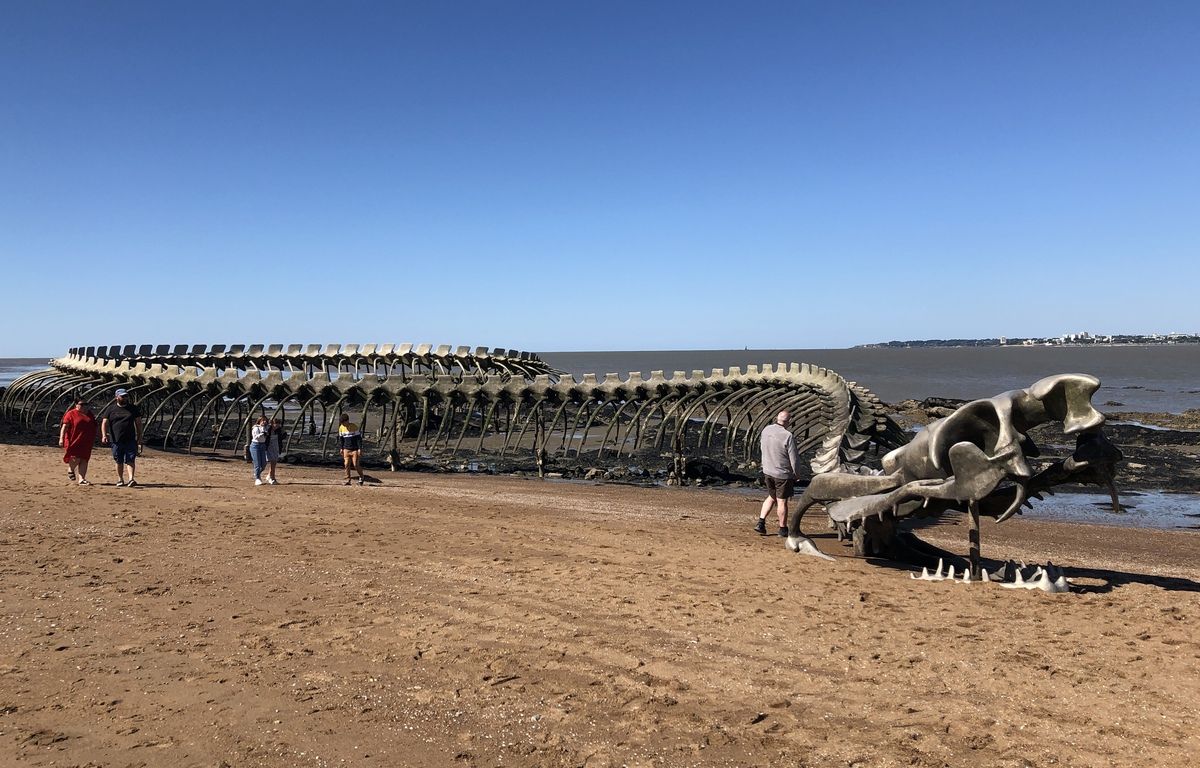 Star of Google Street View, the Serpent d’Océan “is even more beautiful in real life”

You had to arrive around 11:15 a.m., low tide time, to see it appear at full length. This Sunday, under a beautiful sun, many curious people met in Saint-Brevin-les-Pins, on the Nez de Chien beach to discover it with their own eyes. He is this astonishing snake, whose skeleton, covered or not by water depending on the movement of the sea, washed up on the sand ten years ago now.

A 130-meter-long work of art that has since made a name for itself well beyond the borders of Loire-Atlantique: the Serpent d’Océan has even risen to second place among the most visited French places. on Google Street View, behind the Eiffel Tower, recently revealed the site which celebrates its fifteenth anniversary this Sunday.

It must be said that the monster, installed within the framework of the biennale of contemporary art of the course Estuaire (launched by the Voyage to Nantes) has something to surprise. The Chinese artist Huang Yong Ping, who made it all in aluminium, wanted it to be “alive”. A successful bet. “Uh…is that a real skeleton?” Like a dinosaur? “, asks little Louana to her dad, before taking her courage in both hands and entering the mouth of the animal, for a small photo. And it’s not just in children that magic takes hold. “It looks like a fossil, it’s really magnificent, believes Danièle, who came from the Paris region with her husband Jean-Luc. We had seen it on the Internet but here we can get closer, see the detail of the vertebrae, the ribs… For contemporary art fans like us, it’s even more beautiful in real life. »

“Inscribed in the landscape”

In the early years, the reactions were not so unanimous when the inhabitants saw this emblematic figure of Chinese mythology land on this site, where the Loire estuary joins the ocean. But today, like the Saint-Nazaire bridge right next to it, echoed by the curves of the sculpture, “it has become part of the landscape, as evidenced by the shells that have come to colonize it and all the photographers it attracts, especially at sunset,” says Maud Blanchetière. At the Saint-Brévin inter-municipal tourist office, of which she is the director, the Serpent is also spoken of as “a real plus” for the attractiveness of the town and its surroundings. This Sunday morning in any case, it is a first for many visitors. “We live in Vendée but we had never motivated ourselves to come and see this beautiful work”, testify for example Aurélie and her goddaughter Emma.

If this place in the Google Street View ranking, probably obtained thanks to a buzz that arose on Tik Tok a few months ago, should attract a lot of curious people this summer, there is however no urgency to organize this unusual getaway. “Regular maintenance is carried out, with the replacement of a few vertebrae from time to time”, specifies Maud Blanchetière. The carcass is intended to ripple on the beach for many more years. “Fortunately because it’s a masterpiece that you never get tired of,” thinks this couple from Brévinois. As soon as we have friends visiting, this is the first thing we show them! »

See also  In Brazil, an investigation will be launched against the president over the purchase of a vaccine :: Politics :: RBC