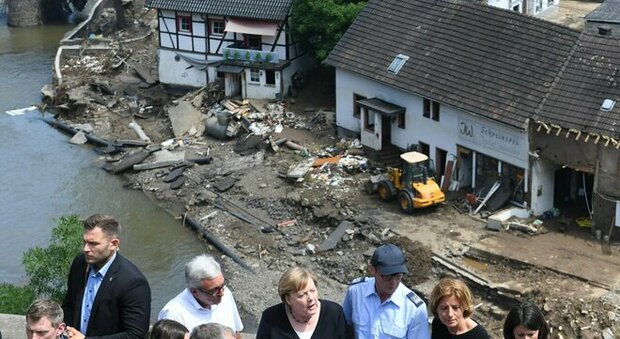 “The German language knows no words to express the devastation that exists here,” says Angela Merkel, after having tackled, at times hand in hand with the president of the Land Malu Dreyer, the places of the catastrophe. The Chancellor does not hide that she is shaken by the “surreal, ghostly” landscape marked by the flood and then admits: “We need a policy that deals more with the climate than has been done in recent years”. Four days after the start of heavy rains that have brought dozens of municipalities to their knees in the Laender of Rhineland-Platinum and North Rhine-Westphalia, Germany mourns 157 lost lives, and many missing people are still being sought.

In Europe the dead are at least 188, adding the 31 victims of Belgium. Since yesterday, however, the enormous masses of water caused by the overflowing of small rivers are also putting a strain on other regions: Upper Bavaria, Saxony, and the Austrian Tyrol. With severe damage, in other cities stormed by water, such as the case of Hallein, just outside Salzburg. In Bad Reichenhall, Bavaria, 150 people were forced to leave their homes after the flooding of the Ache River. For fear of new collapses. And there is no shortage of the first controversies about the responsibilities, precisely of governments, which would not have taken into account the alert on high water: the hydrologist Hannah Cloke denounces it, from the pages of the Times, who speaks of a “huge system failure” , claiming that the governments of Germany and Belgium had known on July 10 the high water, and the critical points that it would touch, thanks to the Efas warning system. Meanwhile, the German locomotive intends to face the gravity of the moment with all its strength: «We are in a position to react financially in close proximity. Germany is a strong state thanks be to God ”, underlined the Bundeskanzlerin which on Wednesday, in the cabinet council, will discuss the allocation of immediate aid, and will prepare a plan for the reconstruction of the Laender affected by the emergency. “We are at your side as a state and as a region.” And the institutions will work “hand in hand”, he spelled out, after having physically represented this gesture, supporting the Social Democratic president of Mainz by the hand, who visited the places of devastation with her, despite suffering from ALS. Merkel also immediately made a commitment: “We have seen how violently nature can act,” she said. “We will oppose this violence in the short, medium and long term”, is the promise that must also be traced back to the electoral context. This flood of historic significance occurs two months after the elections that will mark the beginning of a new era in Germany, and the conservatives of the CDU and the CSU have the Greens as their main opponents in the race, pushed by the environmental emergency in recent years, also if currently in trouble. Merkel visited the town of Schuld, in Ahrweiler, the epicenter of the disaster with 110 victims and 670 injured. In North Rhine-Westphalia, the most up-to-date bulletin reported 46 deaths, including 4 firefighters.

Weather, Palermo overwhelmed by the storm: rescue of the Fire Brigade in a boat

A tragedy caused by the fact that, within 24 hours, masses of water have come down at the rate that is usually reached within one to two months, according to the analysis of experts. However, the weather conditions in the west have improved, allowing for a lowering of the water level. However, the alert remains at the Steinbach dam, which has been under observation for days, for fear that it might give way. The alarm has not yet cleared, as the lowering of the water has slowed. “It will take a long time before you can recognize your country,” said Malu Dreyer. From the pages of Bild am Sonntag, it was the finance minister Olaf Scholz who concretized the extent of the aid: «In the last flood, over 300 million euros were needed. On this occasion, as many will certainly be needed, ”he explained. And to repair destroyed bridges, roads and houses, he concluded, experience shows that the cost will be “billions”.