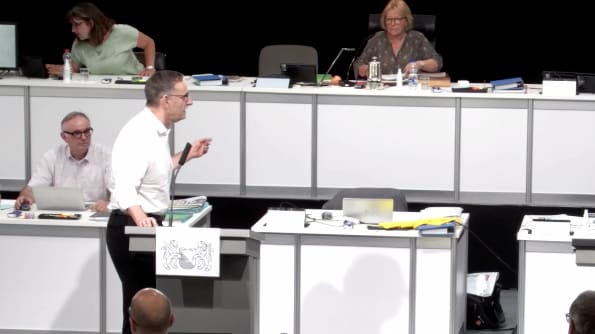 Dispute over speaking time in the cantonal council

How long is a Zurich government councilor allowed to speak in a short debate? This question caused a scandal in the Zurich cantonal council on Monday between the non-party security director Mario Fehr (63) and the green cantonal council president Esther Guyer (71).

Guyer was of the opinion that in the short debate on the urgent declaration of an initiative on the subject of care for underage asylum seekers, the government council had a limited speaking time of two minutes – just like the cantonal council members.

Fehr, on the other hand, told the Keystone-SDA news agency that he had not spoken about the urgency of the initiative, but had made a general statement about the situation of unaccompanied minors seeking asylum in the canton of Zurich. This is an important matter.

Was there a beer of reconciliation?

Since the two main protagonists were visibly annoyed with each other, the question arises: has there been a reconciliation beer in the meantime? Was there even an apology?

Fehr does not want to comment further on Blick and refers to his position yesterday.

“I’ll discuss the whole thing with him, we can certainly come to an agreement,” says Guyer when asked. “I don’t expect an apology from him, but he has to follow the rules in the future.”

See also  175 years of the OeAW: What does the future hold for the employees?

“It is absolutely unusual for a government councilor to speak in a short debate,” explains Guyer. So if, contrary to custom, a government councilor speaks, he must adhere to the same guidelines as the cantonal councils. “At best, we must now expressly state this in the regulations, which we will discuss at the management meeting.”

Fehr, on the other hand, sees his position confirmed by a completely different passage: “The government council can issue a statement on extraordinary events,” says paragraph 66 in the regulations.

Whether the debate about the declaration of urgency for an initiative (and not about the initiative itself) or the issue of underage asylum seekers in the Lilienberg asylum youth center should be regarded as an “extraordinary event” remains a matter of opinion. As is so often the case in law, there is a lot of room for interpretation here.

But one thing is clear: the speaking time scandal continues to be a topic in Zurich. And Fehr will soon be able to speak in detail again about the postulate itself, as the cantonal council has declared it urgent.

The whole media conference: Mario Fehr resigns from the SP(01:55)