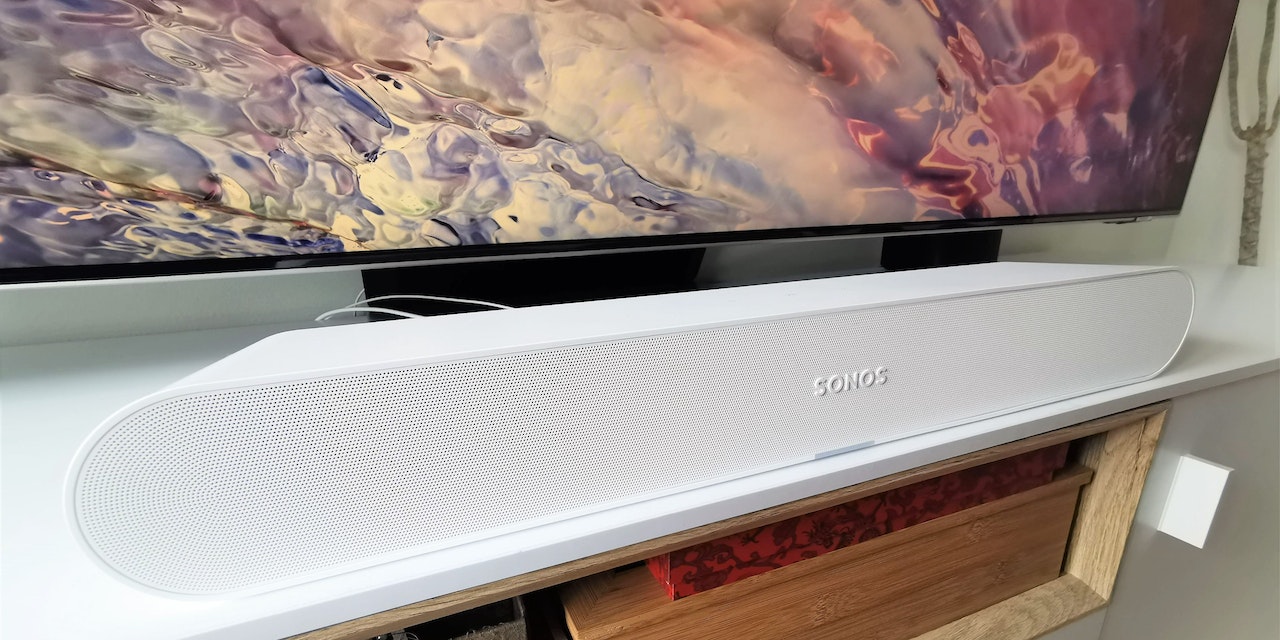 With the new Ray, Sonos has introduced a smaller and cheaper soundbar. In the test, however, this plays a big role, but also leaves something to be desired.

More compact and cheaper – Sonos has probably surprised many users with the announcement of the new soundbar Sonos Ray. The new soundbar in white or black will be available from June 7, 2022 for 299 euros. Although the Ray is far cheaper than the other Sonos soundbars (the Sonos Beam is available for 499 euros, the Sonos Arc for 999 euros), users should still get a lot of sound on their ears. In addition, the Ray can be coupled with other Sonos products – with two One speakers, for example, a surround set is created. “today” tested the Ray before launch.

The compact size of the soundbar is pleasing as soon as you unpack it. With the classic colors, namely white and black, the Ray fits well into any TV landscape, but in our test in connection with a 65-inch television it seemed almost a bit too compact. The advantage, however, is that there should be room for it everywhere. The dimensions and weight: around 56 x 9.5 x 7 centimeters and just under 2 kilograms. The matt plastic part looks and feels high-quality, but the Sonos Ray still doesn’t look quite as elegant and chic as the manufacturer’s two more expensive soundbar models. What I like, however, is that the simple look has been retained.

One of the most important differences between the Ray and the Beam and Arc quickly becomes apparent during commissioning. Although the connection to the power supply and the TV is super simple, the Ray can only be connected to the TV using an optical audio cable. This was also possible with the other soundbars, but the first choice so far was the connection via HDMI-ARC or HDMI-eARC. Other connection options or a wireless connection to the TVG via Bluetooth are also not possible – probably the biggest shortcoming of the new Sonos Ray.

A TV connection is also not possible via WLAN, with which the Sonos Ray is supplied, because this is reserved solely for streaming music and updating the soundbar. Speaking of streaming music: With the Ray, this works via the well-known Sonos app on the smartphone, since the new soundbar also does not have support for language assistants on board. However, it can be paired with other Sonos speakers like the One to form a surround system – and if one of them supports a voice assistant, the Ray can also be controlled with it.

The special features of a Sonos speaker system

Let’s stay with the commissioning for a moment, because – and this is one of the most intelligent functions in the Sonos universe – runs again in a few seconds. Anyone who already owns a Sonos system and uses the app will immediately receive a setup notification in the app as soon as the Ray is connected to the power supply. But even if the Ray is the first Sonos product, all you have to do is install the associated app and follow a few simple steps. The Ray automatically updates itself to the latest version and is ready for use in just a few moments.

The Sonos app and system are both strengths and weaknesses for many users. On the one hand, it is a self-contained system that only allows a few third-party products. So if you want to connect another speaker or another audio product, you either can’t do that at all or you have to buy specific Sonos products that are high quality, but usually very expensive. On the other hand, the system offers perfect multi-room control, extremely easy and wireless commissioning, many streaming services and a bombastic sound.

The small soundbar played really big in the test

But back to the Ray itself – if you can live with the limitations of the connection options to the TV, you will get a surprisingly large, almost overwhelming sound from the small soundbar. During operation, the TV speakers are turned off and the Ray takes over the playback on its own. Even without coupling other Sonos loudspeakers to form a surround system, the music fills the room, with very clear sounds and, if desired, a clearly perceptible bass. Even at high volumes, the playback remains crystal clear, that’s great!

The Sonos Ray also shows some smart strengths in series and film playback. Dialogues and speech in general are emphasized in a way that is easy to understand, regardless of whether there is only subtle background music or explosions and shots rattling from the soundbar. In return, however, the sound effects are by no means dampened, but remain powerful and impressive. In addition, a night mode comes into play, which defuses the loud sounds if desired, for example if the neighbors are not to be disturbed at a late hour or the child is sleeping in the next room.

Lots of technology on board and in the Sonos app

The existing remote control for the Sonos Ray can also be used on most devices on the TV. To do this, simply point the remote control at the soundbar and press the volume button, it will be recognized and can be used from now on. In the test, this worked without any problems with three different television and remote control models. If you just want to use the soundbar as a speaker, as already mentioned, you can of course leave the TV turned off and simply run the desired streaming service or music content via the Sonos app.

Since the sound of the Ray is also directed towards the front, it is not a problem to install it in a shelf or table that is closed at the side but open at the front. If you also use an iOS device, you can have the Ray tuned using Trueplay tuning. For the technology connoisseurs among us, the technical structure: The Ray has four class D digital amplifiers, two tweeters and two mid-range speakers as well as a bass reflex system. Stereo PCM, Dolby Digital 5.1 and DTS Digital Surround are offered as audio formats. The Ray can be readjusted using the app and equalizer.

Incidentally, the Sonos Ray also offers a 10/100 Ethernet port for a wired connection to the router, alternatively the WLAN connection is via the 2.4 gigahertz range. Anyone who would rather hang the Ray on the wall than set it up in front of the TV can do the same; Sonos has a corresponding wall bracket in its range for 49 euros. The conclusion of the test: The biggest weak point is the lack of many connection options. Some TV sets do not even offer the option of an optical audio connection, so users must check in advance whether they can operate the Ray at all. The lack of support for voice assistants is also a cut that has to be accepted.

If you want to enjoy a little more freedom with the connections, you should go for the more expensive Beam or even the almost outrageously expensive Arc. Apart from that, the Sonos Ray trumps with the extremely easy setup, the really practical operation and, above all, with the bombastic sound. In terms of price and connection options, the soundbar may be a comparatively inexpensive entry into the Sonos universe, but there is a surprising amount on offer in terms of quality, especially when it comes to voice playback and the sound effects in series and films. And the Ray can also be heard “only” as a speaker. Another bonus: Any Sonos speakers in the household can be paired with the Ray.