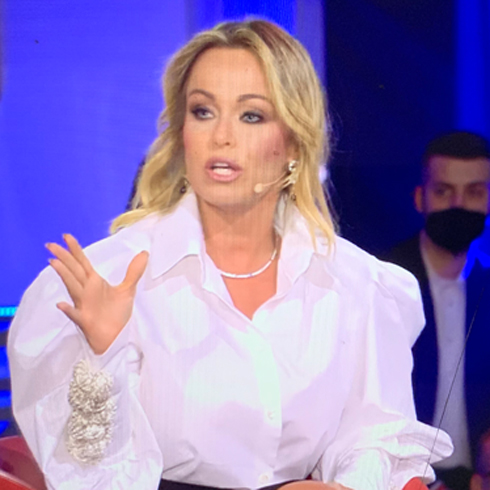 Sonia Bruganelli during the evening episode of GF VIP points his finger versus Nathaly Caldonazzo. Paolo Bonolis’ wife, who returned to the studio after the holiday in Dubai with her family, takes up the role of columnist ‘uncomfortable’ and attacks the 52-year-old blonde showgirl. “You couldn’t wait to bring weeds”, stresses the 47-year-old to the competitor of the reality show,

Sonia already shortly before the live show, while she was on the make-up, via social media had made it known that she did not love Massimo Troisi’s ex-partner very much. “With that walk of hers that seems to be only her, my idea of ​​Nathaly depends on something that happened that maybe I will tell live”, he had revealed.

Shortly after, in front of Alfonso Signorini, Bruganelli does not confide in the episode to which she refers, but when questioned about the Caldonazzo it sinks. “I believe that a person like Nathaly, who arrived later, cannot fail to realize that her entry as she entered would have had important repercussions”he says, criticizing Nathaly’s behavior, deemed too aggressive, in the House.

“It seemed I couldn’t wait to bring a little bit of weeds and create controversy”, adds the columnist. “When you enter a house with people who have been there for four months, you cannot think of entering and be amazed because they have their methods and mechanisms”, finally concludes.

“You’re saying things that don’t exist”, Nathaly countered. “They exist because we have seen them, you provoked them and experienced them …”, Sonia reiterates. Valeria Marini sides with the columnist: “I agree, you entered with a straight leg over everything.” “But what a straight leg!”says the 52-year-old again. Miriana Trevisan justifies it: “It’s a bit rough in character.”

Adriana Volpe tries to be accommodating, Sonia gets excited: “But what does it do Nathaly Caldonazzo Inside there? One who has no respect “. “My arms fall out, thank goodness I have some friends who defend me”, Nathaly replies again, but shortly afterwards she rejoices, voted as a favorite by the public.