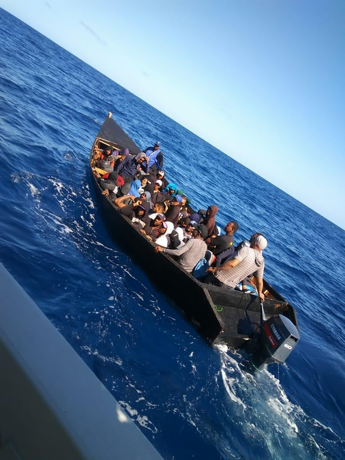 Some 142 Haitian migrants capsize off the southern coast of Cuba

A boat with 141 Haitian migrants capsized off the southern coast of Cuba in the province of Cienfuegos when trying to reach the United States, the official press reported this Saturday.

The ship landed after eight days sailing, said a state television report that showed images of the health care they received.

“Of the 141 people who were traveling on the ship, above capacity and in precarious conditions, 22 are children, and there are pregnant women and older adults,” said Nadezka Carvajal, head of Red Cross Operations in Cienfuegos (233 kilometers from Havana).

“The expedition had set sail for Miami, USA, but the bad weather conditions brought them to the south-central coast of Cuba,” one of the castaways told the local newspaper.

This is the third time this year that groups of Haitians land on Cuban shores in their attempt to reach US territory.

Last May, some 800 Haitian migrants, including a month-old baby, arrived on the north coast of central Cuba and were later returned to their country of origin.

The closest point to the United States is 950 kilometers from Haiti.

According to official data, from 2001 to 2021, only in the Cuban province of Guantánamo (east) a total of 76 boats arrived with more than 4,000 irregular migrants.