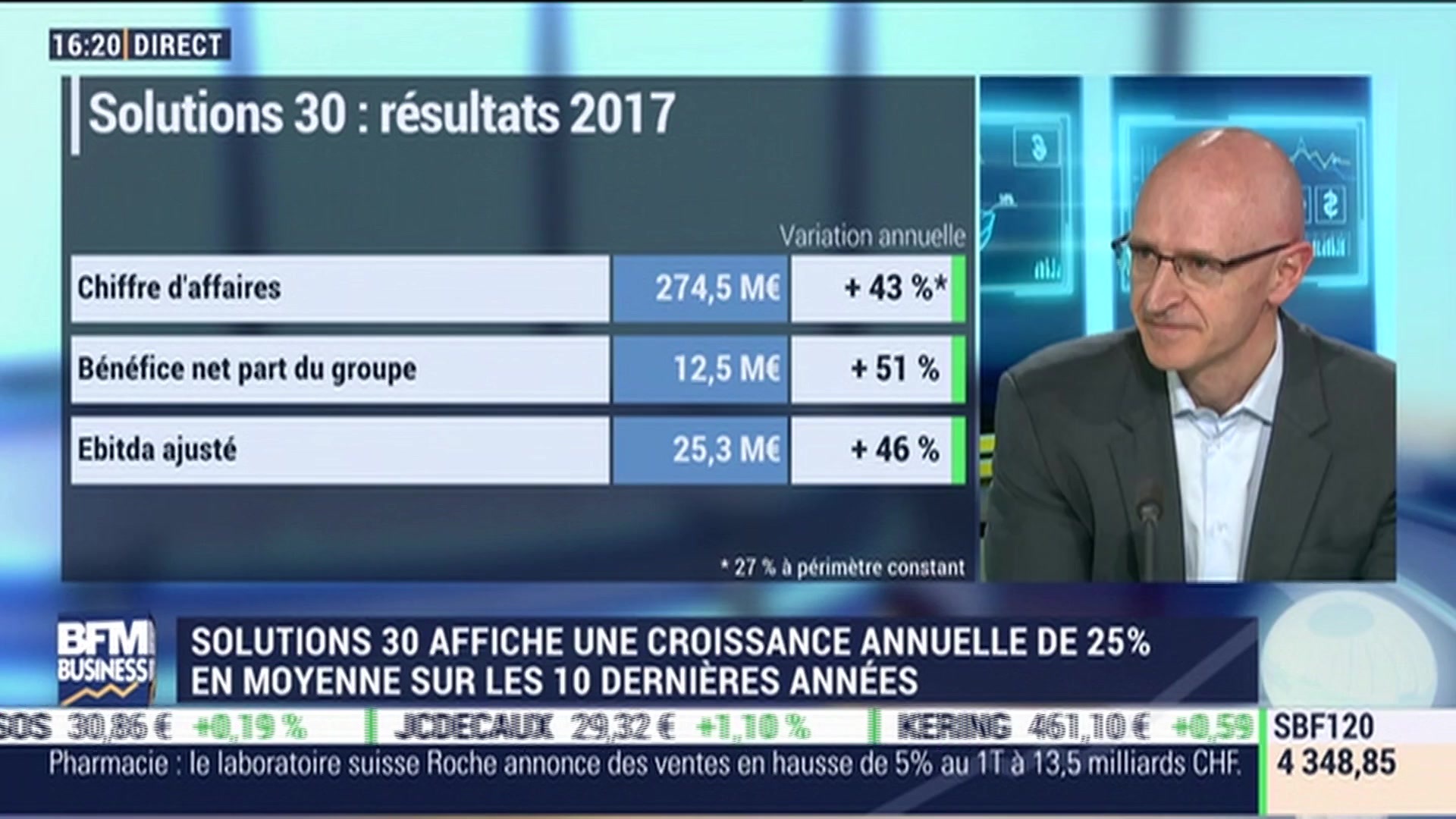 Solutions 30 se: After a drop in profits in 2021, Solutions 30 hopes for a return to growth in the 2nd half

(BFM Bourse) – The European specialist in technical services for new technologies saw its net profit drop by 38% last year, while free cash flow fell by 75%. Starting the year with a slight decline in turnover in the first quarter, Solutions 30 expects to enter a new phase of dynamic growth from the second half.

While the fiber deployment market is maturing in France and the implementation phase of new contracts in other European countries weighs “punctually” on profitability, the Solutions 30 group saw its results melt away last year. However, the company sees itself at the start of a new phase of development, with the first fiber contracts signed in Italy and Benelux and the opportunities it sees in electric mobility, energy savings and renewable energies. . Without giving any quantified targets for 2022, Solutions 30 anticipates that a “new phase of dynamic growth” will thus materialize from the second half of the year, while the first should be a continuation of the second half of 2021, which marked a decline of 4.8%.

Last year, the turnover of the company established in Luxembourg amounted to 874 million euros, up 6.7% (+3.6% in organic data) as already announced in january. After growth of 20.9% during the first six months, the second half was more mixed (-0.7% in the third quarter and -8.4% in the fourth), due to the coming to maturity of the French fiber market, while the ramp-up of growth drivers (energy transition, 5G) was slower than expected due in particular to tensions in supply chains. Solutions 30 also deplores the impact, at the end of the fiscal year, of a peak in absences for quarantine due to the high contagiousness of the variants.

Adjusted EBITDA for the year stood at 82.4 million euros, down 23% compared to 2020 with in particular an increase in operating costs (from 77.2% to 81.3% of revenue). business), partly offset by a drop in structural costs. The adjusted EBITDA margin fell from 13% to 9.4%. In addition to the lower absorption of fixed costs by declining turnover in France and the change in the geographical mix in favor of activities that have not yet reached critical size, this decline is explained by the effects linked to the pandemic and disruptions in the supply chain (for 4 million euros), by the evolution of activities and the operational transition necessary to adapt and prepare for the development of new activities in France (for 6.7 million) and by the ramp-up of new activities and countries that have not yet reached critical mass, requiring the establishment of a new organization and the recruitment of teams in the field (for 9.8 million). Without these elements, the margin would have stood at 11.8%, calculates the firm.

After accounting for depreciation and operating provisions (€16.2 million) and after amortization of the right to use leased assets within the meaning of IFRS 16 for €25.3 million, adjusted Ebit stands at to 40.8 million euros, down 32.9% compared to 2020.

The 2021 financial year also resulted in 13.3 million euros in non-current operating expenses, including 7.1 million euros corresponding to “the expenses incurred by the group to put an end to the violent smear campaign carried out against it. “, and the balance to restructuring operations “carried out to adapt the organization to market developments, in particular in Germany and France”.

Amortization of customer relations rose to €14.7 million from €13 million a year earlier.

After financial result (an income of 4.2 million) and tax (there too an income of 5.4 million, due to the activation of loss carryforwards), the net income group share came out at 21.5 million. euros, compared to 34.5 million euros in 2020.

Given the increase in working capital requirements with the ramp-up of new contracts and the return to “more standard” settlement conditions than in 2020, cash flow decreased to 60.8 million euros, compared to 89.0 million euros.

The new auditor PKF Audit & Conseil considered the consolidated financial statements to be sincere, with the reservation already mentioned in the accounts for the first half of 2021 relating to comparability with the 2020 accounts on which the previous auditor declared himself in the inability to express an opinion.

The group recalls that it also launched a transformation plan last year, with the aim of implementing reinforced and harmonized procedures in terms of governance, risk management and compliance. The architect of this plan was Robert Ziegler, who left the company at the end of the year.

This project entailed a review of all existing policies and procedures in the group, the analysis of its compliance with applicable regulations, in-depth interviews with the management of Solutions 30 and its subsidiaries and the consolidation and analysis of the information collected. to define areas for improvement in terms of governance, risk management and compliance, argues the company, which specifies that the definition of reinforced and harmonized procedures and policies continued at the start of the 2022 financial year. Their implementation is being done gradually over the first half of 2022.

“Solutions 30 is thus opening a new chapter in its development in markets which, whatever their level of maturity, have significant growth reserves and which are supported by the unprecedented recovery plans which are draining public investments towards digital transformation. and the energy transition. Backed by a solid financial structure and a model that allows it to self-finance its growth, Solutions 30 will give priority this year to winning market share. A new phase of dynamic growth is taking shape. will thus materialize from the second half of the financial year, while the 1st half will be a continuation of the 2nd half of 2021”.

“The challenge for the next few months will be to seize market opportunities throughout Europe, then to put in place the tools, processes and teams that will enable this growth to be achieved under good conditions, as we have already made in France between 2015 and 2020. Although the negotiation and implementation phases of the most important new contracts weigh occasionally on profitability, thanks to our experience, our know-how and a very solid financial structure, we know how to absorb the learning curve and industrialize our processes in order to quickly generate double-digit margin rates”, indicated the chairman of the management board, Gianbeppi Fortis.

“At the same time, in France and Spain, we must consolidate our achievements in the more mature market of telecom deployments and capture market share in the maintenance of fiber optic networks, electric mobility, energy savings and renewable energies. This requires adapting our offer and our tools, which we did in 2021 and continue to do at the start of the 2022 financial year. should begin to materialize more strongly from the second half of 2022,” added the leader.

Receive all the information about SOLUTIONS 30 SE in real time: