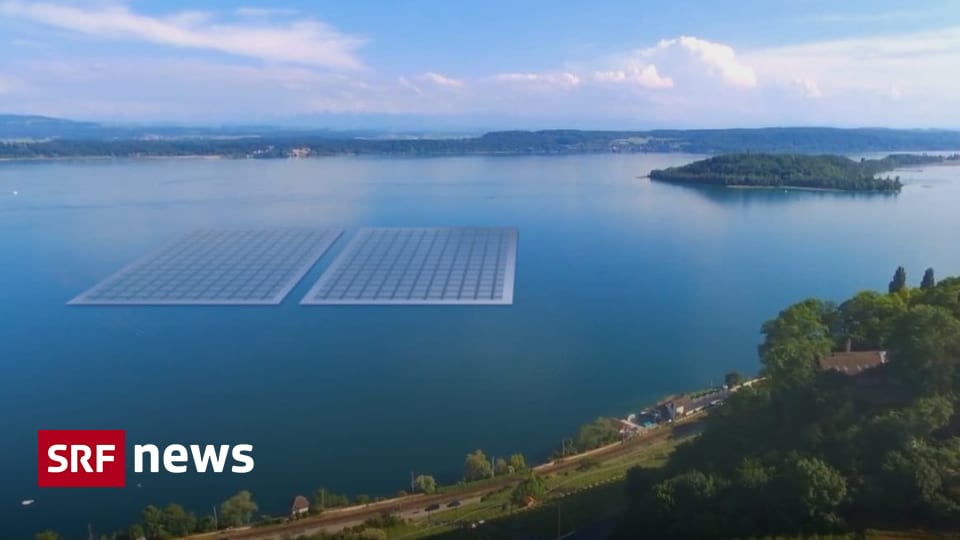 Ten solar power plants on the ten largest lakes in Switzerland – that’s what the energy consulting company “Energie Zukunft Schweiz” proposes. This could make Switzerland less dependent on energy imports. But the hurdles are high.

Lucia Grüter is standing at the lido in Biel and looking out over the lake. Grüter sees huge potential for the Swiss power supply where a sailing ship and a scheduled boat are crossing at the moment, in the middle of Lake Biel. “Five percent of the surface of the ten largest Swiss lakes is enough to produce 15 terawatt hours of electricity.”

15 terawatt hours – that corresponds to a quarter of the total Swiss electricity consumption in one year or three quarters of the energy production of Swiss nuclear power plants. Grüter is a project manager at the consulting firm «Energie Zukunft Schweiz». She sees her project as a contribution to the discussion. Switzerland must now examine all options to increase domestic electricity production.

Grüter did not invent the idea. In Thailand, but also in France, Portugal and the Netherlands, there are already floating solar power plants, on lakes or at sea. And there is also a first pilot project in Switzerland. Since the end of 2019, “Romande Energie” has been producing electricity for 220 households on the Lac des Toules reservoir in Valais.

This pilot plant has an area of ​​a good 2000 square meters. What “Energie Zukunft Schweiz” is proposing today has a completely different dimension. The floating solar panels would cover 85 square kilometers of water and would be located on natural lakes.

«Our lakes are landscape pearls»

The water protection organization “Aqua Viva” takes a critical look at the project idea. «That doesn’t bother me on artificial reservoirs, but our natural lakes are landscape gems. Installing them is a no-go,” says Aqua Viva President Martina Munz. Before large-scale systems are planned on undeveloped areas such as lakes, built-up areas such as parking lots, motorways and facades would have to be used consistently for electricity production.

I think we should consider large-scale photovoltaic systems in open fields.

Anthony Patt, ETH professor for climate policy, points out that previous experiences abroad with floating solar power plants are good. Nevertheless, large-scale projects on lakes are not the first choice for the professor of climate policy. “I think we should consider large-scale photovoltaic systems in open fields and in the Alps.” There are enough fields that are less scenically valuable than a lake. And systems in the mountains produce a lot of electricity in winter.

In fact, two major photovoltaic projects have been launched in the Valais Alps in recent months, in Grengiols and above Gondo. Regardless of the location, it is clear to Anthony Patt that Switzerland can hardly avoid building large-scale plants. “It’s going too slowly in Switzerland. And large-scale systems would be attractive for large investors and they produce cheaper electricity.”

For Lucia Grüter from “Energie Zukunft Schweiz” it is important that all possibilities are discussed now. And she emphasizes that these could also help to close the winter power gap. “We would only produce about 30 percent of the electricity on the lakes in the winter months. But with a large amount of installed electricity, 30 percent is also very important.”