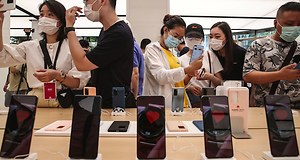 Goal achieved for Huawei! The Chinese manufacturer has just established itself as the world’s largest seller of smartphones for the first time in a quarter. According to market research firm Canalys, the Shenzhen-based company sold 55.8 million devices between April and June, against 53.7 million for South Korean Samsung.

In recent months, Huawei executives no longer hid their ambitions. But these results – which allow Huawei to take a pole position that Samsung and Apple have undoubtedly shared for nine years – are more a reflection of a smartphone market turned upside down by the Covid-19 epidemic than that of a strategy victorious Chinese.

In the second quarter, global smartphone sales were driven by Chinese consumers, affected first by the epidemic but ultimately less impacted than the rest of the world by containment measures and a slowing economy. However, it is in China that Huawei sells 70% of its smartphones. In the end, Canalys recorded a drop in volumes sold by Huawei of “only” 5%. Over the year, the research firm IDC anticipates a drop in the global market of 11.9%.

Samsung has suffered more. In volume, Canalys estimates the fall in sales of South Korean smartphones at 30%. More exposed to the closure of shops in the American and European markets than its Chinese rival, it recorded revenues in this segment down 18%, according to quarterly results published this Thursday, July 30 in Seoul. Over all of its activity in consumer electronics (smartphone, television, electronic chips, etc.), its revenue fell by 6%. But operational profit increased by 23%, driven by the success of very profitable memory chips intended for computer servers in online computing (“cloud computing”), which is booming.

In Europe, Huawei’s ambitions are thwarted in the 5G telecom equipment market – the United Kingdom and France intend to ban Chinese technologies in the more or less long term – as in the mobile sector. The group has seen the craze for its smartphones diminish. The newer ones are indeed deprived of access to Google’s vast mobile application store due to US regulations preventing many US-based technology companies from working with Chinese. Despite Huawei’s denials, the US government still suspects it of cooperating with the Middle Empire’s secret services.

But this pressure from the US government did not prevent Huawei from closing an old intellectual property dispute with the Californian Qualcomm, which supplies it with the processors for its smartphones. Like Apple, which settled the same type of conflict with Qualcomm last year, the Chinese will pay a large check ($ 1.8 billion) to its partner but will be able to continue working with him. Due to US restrictions on the export of electronic components from the US to China, Huawei’s latest smartphones include fewer and fewer US parts but still incorporate Qualcomm elements. A sign that Huawei quickly imagines resuming a growth rate, the CEO of Qualcomm assured that this “deal” would further increase the volume of business between the two companies.