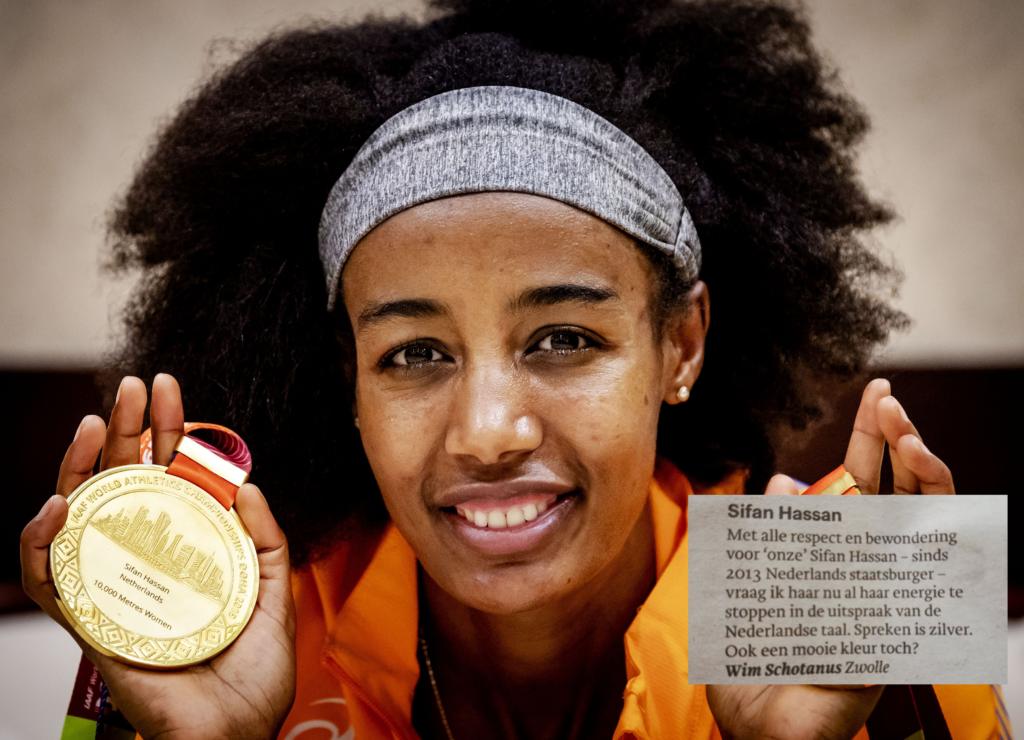 ‘Slap him in the mouth’

There has been a lot of fuss about a letter to the editor that appeared in the Monday edition of Fidelity appeared. One Wim Schotanus from Zwolle wrote there that Sifan Hassan, the athlete who stole the hearts of the public during the Olympic Games, can now better focus her energy on her pronunciation of the Dutch language. It arouses much anger and surprise among Twitter users. Not only the writer, but also the newspaper is under fire. ‘Which fucking newspaper is posting this?’

“With all due respect and admiration for ‘our’ Sifan Hassan – a Dutch citizen since 2013”, the reader response of the Zwollenaar begins in Fidelity. “I now ask her to put all her energy into pronouncing the Dutch language. Speaking is silver. Also a nice color, right?”, says the writer.

It leads to angry reactions. “To start with, I want to hit Wim Schot Anus from Zwolle in the mouth,” writes a tweeter. Another likes to laugh in his face. “Can’t wait to hear Mr. Schotanus’s Coal Tree Angels and laugh hard in his face #PieceSorrow.”

The name of the Zwolle native causes extra scorn. “Mr. Schotanus, you are talking shit,” writes one. Tim Hofman also makes himself heard: “Wim, the fact that you are called Schotanus from behind does not mean that you necessarily have to think with your ass friend.”

Wim, just because you’re called Schotanus from behind doesn’t mean you have to think with your ass, friend. pic.twitter.com/67IYa9oGRX

What kind of newspaper is posting this? Just as bad as he of Schotanus.

Many people call the letter submitted racist. Earlier there was also a fuss about alleged racism around Hassan. One ADsports journalist who interviewed Hassan after a race asked her if she knew who Snollebollekes were. It loosened the tongues.

A newspaper editor thought it was a sensible idea to publish this letter. This is how racism rolls ‘with all due respect’. pic.twitter.com/O4PL2BjCoI

I just read a reader comment in the @Fidelity … this scares me. Still one of #racism what the newspaper allows here. #sifan pic.twitter.com/ax1TOm3bHn

Sifan Hassan (28) became the great heroine of the recent Olympic Games in Tokyo. Her victories were an achievement in itself, as she became the first woman ever to medal in the 1500, 5000 and 10,000 meters. Until then, no athlete at any Olympics had ever done that.

The athlete won two golds in the 5000 and 10,000 meters and bronze in the 1500 meters. It was the Netherlands’ first gold medal in athletics in 29 years. The ‘medal triple’ also became big news abroad. At the BBC she was even called ‘the greatest of all time’.

The circumstances under which she won those medals made her sports appearance extra magical. Hassan ran the race for the 1500 meters in the morning, to start the 5000 meters twelve hours later. During an earlier race she crashed and the race seemed over for her. But the athlete stepped up a gear, closed the gap, and won. During the closing ceremony she was allowed to carry the Dutch flag.

Fans want a celebration in Arnhem

Hassan fans fear that the athlete is not getting enough attention despite her performance. It is still very quiet around a possible tribute. Although she is there during the celebration of TeamNL as a whole, Hassan deserves her own tribute, according to many supporters.

However, there are no plans for that at the moment. This is probably due to the fact that she no longer lives in the Netherlands. Hassan has been living and training in the United States for several years, but many supporters still think she deserves a celebration in Arnhem. After all, she lived in that city for the last time and built up her career. And so a petition has now been started to force a tribute for Hassan.

Sifan, on behalf of Arnhem today three times our cheering congratulations for the wonderful combination of 1500, 5000 and 10,000 meters: hip, hip, hooray! Gift, discipline and drive, we put it in our ears – thank you!

Sifan Hassan: ‘I cried every day’

Sifan Hassan was sent to the Netherlands by her mother in 2008. She never said anything about her background. She did that about the relief camp in Zuidlaren where she ended up. “I cried every day.” It was only in Leeuwarden that she found her happiness again. A woman in Leeuwarden cared for her like a mother. From that time on, Sifan Hassan picked up running. Until then she had only walked recreationally in Ethiopia.

See also  Athletics: In Munich, the programming of the decathlon challenges

Twitter spews bile about ‘racist’ letter about Sifan Hassan: ‘Hit him in the mouth’