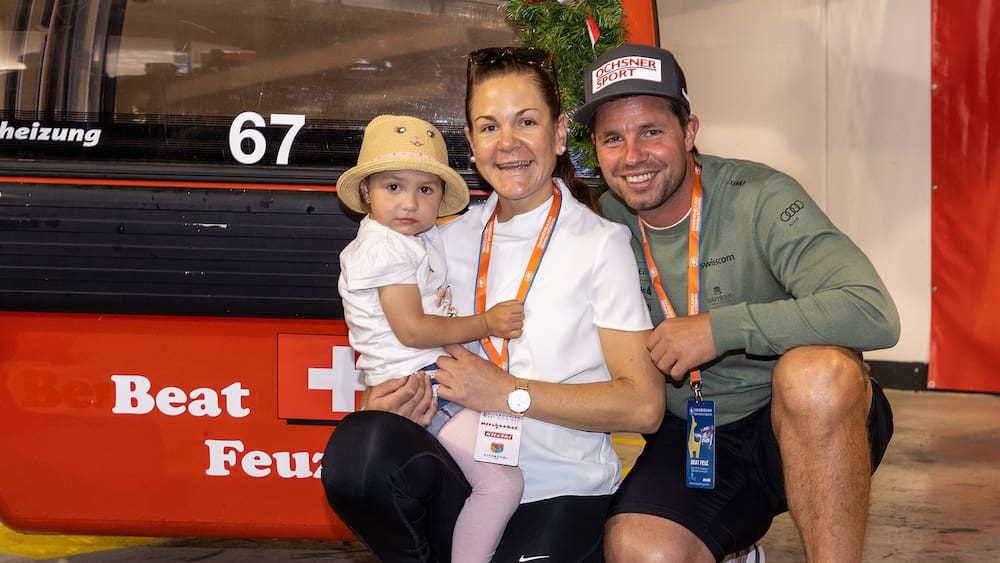 Ski: Baby alarm with Beat Feuz in front of Wengen and Kitzbühel

For the three-time Lauberhorn winner Beat Feuz, the most exciting time of the year has long since begun. And the downhill classics in Wengen and Kitzbühel and the Olympic Games in Beijing are not the main reason for this – his partner Katrin is expecting her second child this month. How would the Emmentaler react if labor started a few hours before the start of the Lauberhorn descent?

Feuz, who could dethrone the Lauberhorn record triumphant Franz Klammer (67, Austria) with two wins this week, already answered this question clearly before the speed kick-off in November: “Then I would be without a race and fly to the hospital by helicopter. I’ve already organized the flight. The family is more important to me than another victory on the Lauberhorn or in Kitzbühel. ”

Daughter Clea no longer in kindergarten

And even if the due date for the second child may not be due until the end of the month – Feuz and friend Katrin have long been on the alert. “You never know exactly when the time will come,” says the four-time Downhill World Cup ball winner. “In any case, the cell phone is no longer muted at night.”

The Feuz family is also vigilant in other respects. One month before the season highlight, the Olympics in Beijing, nothing is left to chance because of the corona virus. If an athlete gets infected with the virus now, he will not only miss the classics in Wengen and Kitzbühel, but also the Olympic downhill run. The determination of the Chinese is tough: On February 6th, in Beijing, only men are allowed to start in the supreme discipline who had tested negative for Covid in the 20 days before without exception.

“We are very meticulous about this,” explains Feuz. A Covid infection at the current time would be bad. “That’s why we haven’t sent our daughter Clea to kindergarten for the past few weeks and months, for example.”

Dinner is served in shifts

That is especially hard for partner Katrin. “Right now she would like to go out and meet people.”

Feuz is not the only one among the Swiss ski stars to exercise great caution. Head coach Tom Stauffer has tightened the measures at the ancient Hotel Belvedere in Wengen. So that not too many team members sit in the dining room at once, dinner is served in three shifts – the first group dines at 6 p.m., the second at 7 p.m., and the third at 8 p.m.

Ski fans watch out! Now take a quiz and type in ski races

The 2021/2022 ski season is really getting going, and with it the newly launched “Blick Ski Trophy”: answer questions, type in ski races and crown yourself ski champion. Numerous prizes await.

To take part in the “Blick Ski Trophy”, watch out for the trophy icon on the mobile and desktop version or go directly to skitrophy.ws.blick.ch.

Have fun and good luck!

The 2021/2022 ski season is really getting going, and with it the newly launched “Blick Ski Trophy”: answer questions, type in ski races and crown yourself ski champion. Numerous prizes await.

To take part in the “Blick Ski Trophy”, watch out for the trophy icon on the mobile and desktop version or go directly to skitrophy.ws.blick.ch.

Have fun and good luck!