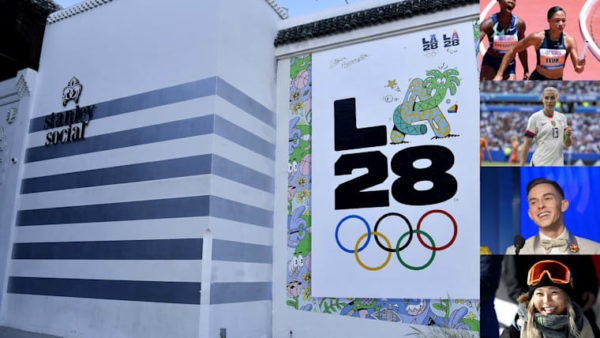 A coincidence of the calendar, nothing more. The organizers of the Los Angeles 2028 Games officially announced, on Monday July 18, the dates of the Olympic and Paralympic meeting in California. The opening ceremony of the Olympic Games will take place on July 14, 2028, the French National Day. A coincidence of the calendar in the form of a wink, four years after the Paris 2024 Games.

In the candidacy file, Los Angeles 2028 planned the Olympic Games straddling July and August (July 21 to August 6), then the Paralympic Games also straddling two months (August 22 to September 3). But, surprise, the Californian organizers have advanced their date.

For the Paralympic Games, the Americans are also innovating, with competitions scheduled for August 15-27. They will be the first in history to be held in California.

As a reminder, the Paris 2024 Games will take place from July 26 to August 11 for the Olympic version, then from August 28 to September 8 for the Paralympic counterpart.

Janet Evans, the multiple Olympic medalist in swimming, now Athlete Relations Manager at LA 2028, explained on Monday (July 18): “Today marks the official countdown to the LA28 Olympic and Paralympic Games. They will be like no other, showcasing the best of Southern California’s exceptional venues and world-class culture to athletes and fans alike. This stage makes the Games real, for each of the athletes who train to achieve their LA28 dream, but also for all the fans who follow the adventure..”

Same promise of greatness with Casey Wasserman, the president of LA28. The Californian takes up a speech already heard many times during the application phase: “Los Angeles is an ambitious city of endless possibilities, where the Games will reflect our community. LA will provide the perfect backdrop to host the world’s largest cultural, sporting and entertainment event.”

Anything but a coincidence, the official announcement of the dates of the Games came on the occasion of Thomas Bach’s visit to Los Angeles. The IOC President began his American journey last week in Birmingham, Alabama, to make an appearance at the 2022 World Games. He continued it further west with a stopover in the future Olympic city.

Accompanied by Nicole Hoevertsz, President of the LA 2028 Games Coordination Commission, Thomas Bach offered himself a site visit. It did not reserve any surprises for it, the Californian file essentially providing for the use of already existing equipment, including for the athletes’ village, planned on the campus of the University of Southern California (USC).

The German leader was also treated to a presentation on the ground of some of the initiatives and achievements of the PlayLA program, dedicated to the development of sports practice among young people. Thomas Bach was thus able to verify that the IOC’s money was spent as written in the contract, the Olympic body having agreed to invest 160 million dollars in the program, in return for the agreement concluded with Los Angeles to waive the Games in 2024 and accept the 2028 edition.

Thomas Bach did not hold back his praise: “Six years before the opening ceremony of the Los Angeles 2028 Olympic Games, this is already a significant legacy, making a noticeable difference in the lives of more than 100,000 children. This program will help attract new fans of Olympic sports, and leave a sporting legacy for generations to come.”

A legacy, already, six years before the first competitions. Very strong. But, less fortunate timing, the start of the countdown to the Los Angeles 2028 Games comes as the group NBCUniversal, which holds broadcast rights until 2032, is preparing to shut down its Olympic Channel. Launched in 2017, it will stop broadcasting on September 30.