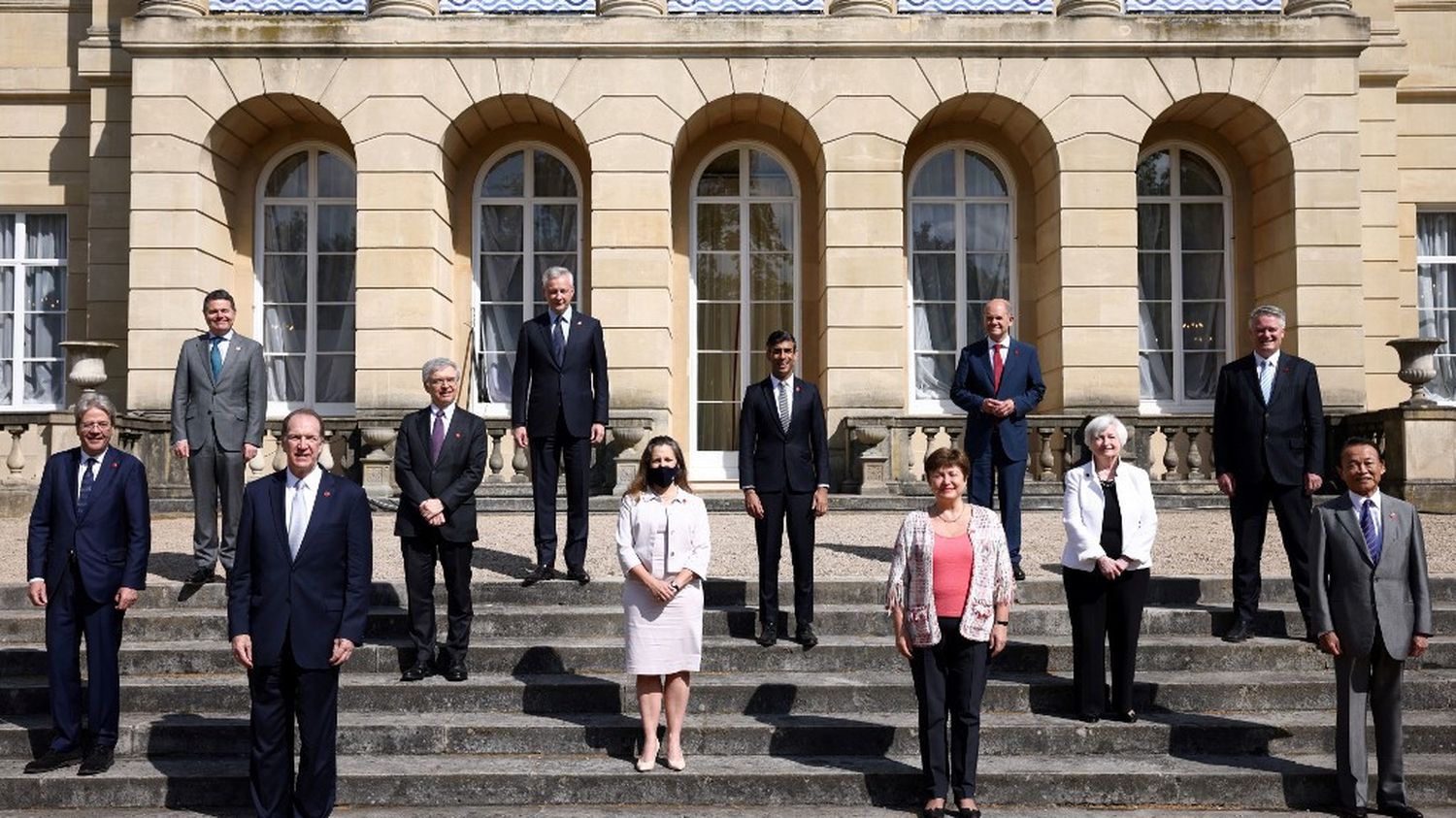 It’s a deal “historical”, according to Bruno Le Maire. The G7 countries agreed on Saturday 5 June on the establishment of a corporate tax “at least 15%”. After two days of meeting in London (United Kingdom), the finance ministers of the seven richest countries on the planet reached an agreement on this measure which aims to establish a minimum world tax rate.

Bruno Le Maire, the French Minister of Economy and Finance, welcomed on Twitter the introduction of this tax and welcomed on franceinfo “an important and difficult step” now crossed with this agreement.

Here we are !
After 4 years of fighting, a historic agreement has been reached with the G7 member states on minimum taxation on companies and digital giants.
France can be proud! pic.twitter.com/eIMqjweyjl

But this announcement raises many questions, to which Franceinfo has tried to provide answers.

Each country is free to define its own corporate tax rules. Some states therefore have tax policies that are much more advantageous than those of their neighbors, and corporate tax rates that are close to 0%. We then speak of “fiscal dumping”. In 2020, an Irish subsidiary of Microsoft, registered in Bermuda, thus achieved 256 billion euros in profits for … zero euros in taxes, reports the Guardian.

Many multinationals take advantage of these attractive tax policies and avoid tax on their profits by registering in these advantageous territories: in the Cayman Islands, Bermuda, but also in Ireland, Malta or Cyprus. To fight against this colossal loss for their national economies, several world powers wanted to agree on a common minimum tax rate, which they could levy on the profits made on their soil. They achieved this on Saturday by setting the common minimum rate of 15%. “The ‘fiscal dumping’ (…) now ends with this agreement”, congratulated Bruno Le Maire.

2Is this agreement really “historic”?

“If we start from the principle that nothing existed before, it is sure that it is historical”, estimates the economist Vincent Drezet, member of the organization Attac, questioned by franceinfo. But, despite all the goodwill of Bruno Le Maire, it is impossible to attribute the success of this agreement to France. “What changed the game was the American position. Joe Biden paved the way for this agreement. It shows how much when Western states are united, they can make a difference.”, acknowledged the French Minister of Economy and Finance.

After four years of a very business-friendly American tax policy under the leadership of Donald Trump, the arrival of Joe Biden at the White House marked a turning point in terms of the taxation of multinationals. “Joe Biden has relaunched discussions that already existed at the level of the OECD. The organization carried a rate around 12 to 13%, the 15% is therefore not a particularly important advance, they did not snatch a rate historical”, emphasizes Vincent Drezet.

“An initiative of a few isolated European states, without international support, could not have worked. As soon as the United States gets involved, they will change things.”, insists Fabrice Bin, lecturer in tax law at Toulouse 1 Capitole University, contacted by franceinfo. “Having the Americans and the British be part of the deal is what will make it successful.”

Not really. If we refer to the corporate tax rates of the G7 countries, this rate of 15% is well below the amounts to which they themselves tax companies in their territories. In 2019, France was first in the rankings, with a tax rate of 34.4%, followed by Germany and Japan. In 2022, this tricolor rate should however reach 25%.

To encourage companies to settle or stay there, France wants to raise the global tax rate to around 20 to 25%, according to statements by Bruno Le Maire. An ambition that Vincent Drezet strongly doubts: “Joe Biden proposed 21%. Why did France not follow this figure, which would have been really historic? The perverse effect is that we remain in a context of tax competition, so we lower rates to align. And by setting a low rate, we do not prevent tax competition. “

Fabrice Bin is more temperate. This rate lower than the stated ambitions looks, according to him, “to a negotiation to limit taxation, so that companies play the game. It corresponds more or less to the rate in force in Luxembourg. For Ireland, it is 12.5%”, specifies the lecturer. With a rate of 15%, the goal is to come close despite everything to the rate applied in countries with advantageous tax legislation.

4Which companies are targeted?

The companies targeted are mainly the digital giants: Google, Amazon, Facebook, Apple, Microsoft. For several years, these multinationals have evaded tax in many countries where they make major profits, thanks to their tax location in countries with more advantageous legislation. “We are fighting against a number of regulatory tax havens”, estimated on franceinfo Henri Sterdyniak, economist at the OFCE and member of the appalled Economists.

READ  From 2027 everything will be different

The purpose of this measure is to tax multinationals, which with several millions or even billions of profits, can bear much heavier taxes. With the implementation of the agreement, each of the states that would apply this minimum corporate tax could recover 15% of 20% of the profits made on its soil. “It can be all the more effective if the company currently benefits from a negotiated rate of 0% in Luxembourg, since the countries concerned would directly recover 15%. It would completely cancel the tax advantage. Hence the importance of ‘to have among the members of the agreement the greatest economic powers “, notes Fabrice Bin.

5How will it work?

Bruno Le Maire affirms it: France will be able to recover “tens of billions of euros” thanks to this measure. It is clear that the real effects will be smaller than the announcement effect. If the states have agreed on a rate of 15%, this does not mean that it will apply to all multinationals strictly. If the measure is properly implemented, it will consist of taking 15% out of 20% of the profits made by the company in a country, provided that it achieves a margin of more than 10%. “It is a margin which is realized in many sectors, such as luxury goods, clothing, it is quite achievable, it is not a negligible percentage”, comments Fabrice Bin. Concretely, if a French company based for tax purposes abroad, makes 100 million euros of profits in France, and it does have a margin rate of 10%, it will be deducted 15% of 20 million, or 3 million euros. This is the simple version.

There remains the case of a company located in a tax haven, or outside the countries concerned. Bruno Le Maire argues that a company “can always relocate to a country where the rate is 2%. But the 13% difference from the minimum rate that we have set for the moment at 15%, we will recover them.” The question arises of how to recover this difference. “At the OECD, in academic circles, there are many reflections on the application of this 15%. The idea would be to impose the added value in the country where it is carried out, explains Fabrice Bin. In theory, it’s great. In practice, this poses enormous difficulties, to identify where the added value is achieved. It will take genuine cooperation from national tax administrations. “

When a company achieves more than 750 million euros in turnover per year, it is required to make a country-by-country declaration: it must report the exact amount pocketed in each State where it is present, even if these profits are not necessarily taxable at present. According to Vincent Drezet, it is on this declaration that the French tax authorities would rely to get the 13% difference. He would demand 13% of the profits made in France. “It remains to be certain of the veracity of these statements”, comments the tax expert.

READ  First details of its launch

6When will this tax be implemented?

Better not to be in too much of a hurry. The G7 has no binding power, so it cannot impose this tax on its own. We must now convince the G20 to align with this measure. This means convincing China, India, South Korea or Brazil to be heavyweights in the world economy. A meeting will take place on July 9 and 10 in Venice (Italy). For the British Minister of Finance Rishi Sunak, it is clear that the implementation of this rate is not foreseen in the immediate future: “It is difficult to say when a final agreement will be reached.”

After agreement by the G20, the member countries of the OECD will then in turn have to approve this measure. “There is still a lot of work to be done. But this decision gives an important impetus to the discussions to come between the 139 member countries of the inclusive framework of the OECD (…) where we continue to seek an agreement ensuring that multinationals pay their fair share of tax“, said the secretary general of the OECD, Mathias Cormann, in a press release.

France will take over the rotating presidency in 2022, which should weigh in the balance to speed up the negotiations. But the process does not end there. If the measure is accepted, it will then have to be transposed into European law, then into national law for it to see the light of day, since no tax rule can be imposed on a State. “We’re not there before 2023 at the earliest”, summarizes Vincent Drezet.