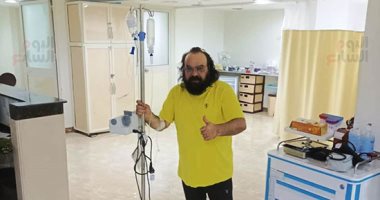 Singer Nader Abu El-Leef left the hospital after improving his health condition, which he was in in the eastern Alexandria region, after he was recently exposed to a health crisis that entered him into intensive care, which showed that he had weak heart muscle and shortness of breath.

The singer, Nader Abu Al-Leef, had revealed the latest developments in his health condition, after he was recently exposed to a crisis, as a result of which he was transferred to a hospital, saying in statements to “The Seventh Day”: Praise be to God, my condition is stable after experiencing a weakness in the heart muscle and shortness of breath.

“Abu Al-Leef” added, “Praise be to God, he is better and continues in intensive care until breathing and heart muscle are controlled, and all that our Lord answers well, and thanks to all my fans and all the people who asked me after my return from treatment, and I will release a new song that I had finished recording as a gift to my audience.” dear

Dr. Mahmoud Zeidan, the attending physician of singer Nader Abu El-Leef, revealed about the latest developments in his health, that Abu El-Leef was admitted to the hospital with lung infections and rapid heartbeat, and he had a large shortage of oxygen in the blood.

“Zidane,” the singer’s therapist, said in an exclusive statement to “The Seventh Day”, that the health condition is now almost stable after he was put on respirators from the first moment he was admitted to the hospital, and antibiotics were intensified until his condition stabilized greatly.