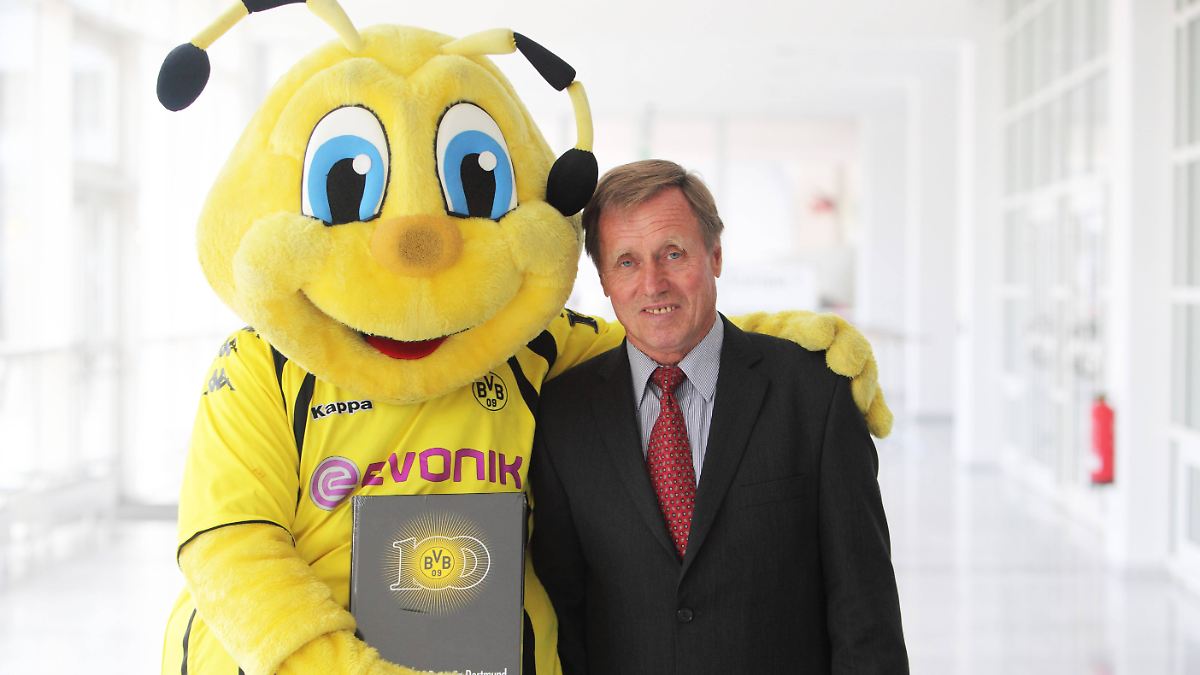 Siggi Held is Vice World Champion and European Cup winner – and a “born footballer”, as his coach at BVB, Willi Multhaup, once said full of admiration. But the vast majority of fans associate him with a very special quality that also earned him his legendary nickname.

Even a “silent” can say big sentences. When the unforgettable story of the dog biting Schalke’s Friedel Rausch’s buttocks from 1969 was told again, BVB legend Siggi Held smiled quietly for a long time until he finally spoke up and said with a grin: “A decisive one I always miss out on the story a lot. You have to think about what clever dogs we had in Dortmund back then. They could have bitten anyone on the pitch. But no. They chose Schalke of all people!” What true words.

And yet: Sigfried Held will probably never be able to shake off his nickname “The Silent” for the rest of his life – even if he himself never found it particularly appropriate. But the press cemented the foundation stone for a “legend” on many levels at the time, as Held himself once said. After all, he sees himself as someone who likes to talk a lot, just not all the time and with everyone. But when journalists started wanting to find out more and more about the internals of their newspapers and magazines, he became suspicious. And when someone asked him one day how he was doing, he replied: “Do you want to sound me out?” The next morning he could read his new nickname in the newspaper. And it held up.

When Held switched from Kickers Offenbach to Borussia Dortmund in the 1965/66 season, the “kicker” wrote about the then 23-year-old: “He doesn’t smoke, doesn’t drink and saves. Siggi Held lives spartanly as a furnished gentleman in a room in Dortmund. This simple one Life is guaranteed by the original game Helds, its explosiveness. Held is a taciturn man. He prefers to listen to other people to talk.” Many years later, the then manager at Dynamo Dresden, Udo Klug, said of his coach: “Siggi sometimes doesn’t talk, but says a lot!” You can actually see the whole thing that way. And it was clear to Held that his main task was always in a different area: “I’m not employed as Rudi Carrell.”

See also  French bobsleigh is reborn thanks to Margot Boch and Carla Sénéchal, two girls no one believed in

“Töppen from Siggi Held are similar to ice hockey boots”

It is amazing how many very wise words the man, who was born in the Sudetenland and grew up in Marktheidenfeld in Lower Franconia, spoke in his long career as a player and coach. He once said as a footballer when he was more mature: “I’m sometimes surprised when, in a business as success-oriented as professional football, there is more of a distinction between young and old than between good and bad players. It’s not like the election of the Pope. The Pope always has to be Catholic. But a good footballer doesn’t have to be younger than 30.”

When he finally played under coach Otto Rehhagel at the age of 32, he clarified his statement again: “In football there are no old or young players – only good or bad ones”. Incidentally, that’s a sentence that one would mistakenly attribute to the long-time Werder coach Rehhagel today, because he received a lot of praise in Bremen at the time for celebrating great success with players in the final stages of their careers, such as Manni Burgsmüller and Klaus Allofs . At some point he adopted Siggi Held’s sentence almost exactly. The vice world champion from 1966 (“Age is only important in two cases: At 18 you can go to any film and from 65 you get a pension”) played even further than the coach at Borussia Dortmund, Udo Lattek, who was only seven years his senior had long since sorted out. Lattek’s explanation at the time: “I don’t want to sit on the sidelines with the air pump all the time.” And so, at the age of 37, Held donned the Bayer Uerdingen jersey.

See also  Haaland: BVB "started putting a lot of pressure on me" - Zorc is surprised at the criticism

At the time, he described his precise daily routine to a reporter. He would sleep twelve hours a night. Have eggs, butter and fruit juice for breakfast. Then take a walk in the countryside. Eat nothing for lunch. And have a cup of tea before heading to the stadium. Very special soccer shoes would then be waiting for him in the changing room, as his coach Horst Buhtz reported: “Siggi Held’s shoes are more like ice hockey boots. They enclose the ankles and support shins and calves, everything is held together by a network of cords , as if Siggi wanted to moor a motorboat.”

Back then, he proved time and again that the “Schweiger” could also be spontaneously witty here. When much younger opponents called him “Grandpa”, he responded in an elegant, reserved but determined manner: “Since when do we talk on first-name terms?” Even in his time as a coach, one could not complain about a lack of verbal contributions. Held in a good mood in Leipzig called out to his hesitant players on the pitch: “You don’t want to hurt the ball, do you?” And to an overly eager TV team that had spread out on the green lawn, he offered rhetorically very gallantly during training: “Gentlemen, if we bother you, we can go somewhere else.”

Ben Redelings is a passionate “chronicler of football madness” and a supporter of the glorious VfL Bochum. The bestselling author and comedian lives in the Ruhr area and maintains his legendary anecdote treasure chest. For ntv.de he writes down the most exciting and funniest stories on Mondays and Saturdays. More information about Ben Redeling, his current dates and his current book (“60 Years Bundesliga. The Anniversary Album”) is available on his website www.scudetto.de.

Once Held almost trumped an entire, legendary game with a single sentence. On April 29, 1978, when Borussia Mönchengladbach was 7-0 up in Düsseldorf’s Rheinstadion, Dortmund coach Otto Rehhagel ran excitedly to his BVB bench. There he stopped abruptly and said to Siggi Held: “Sigfried, warm up. They’ll be right back.” But in view of the depressing events on the pitch, Held made no attempt to do anything, let alone get up and stretch his ligaments. After Rehhagel had covered a few meters on the tartan track of the Rheinstadion, he headed back to his player: “Don’t you hear? You should warm up, Sigfried. I’ll bring you right away!”

But Held just tugged at his lush eyebrows and sat back calmly and watched goals eight and nine fall against his side. Understandably, Otto Rehhagel was now finally served. He sprinted furiously to the bank, grabbed his idle player and whispered to him, “You’re kidding me, aren’t you?!” Sigfried Held slowly got up from his place on the hard wooden bench, calmly looked Rehhagel in the face and then said: “Coach, honestly, should I bend that shit over, or what?!” After that, Otto Rehhagel became very silent.

Siggi Held, who is celebrating his 80th birthday today, was once called a “born footballer” by his coach Willi Multhaup, with whom he brought the European Cup to the Ruhr area for Borussia Dortmund in 1966. That’s it. All the best and good luck, dear Sigfried Held, on today’s day of honor!