Should have left Formula 1 earlier

That’s it for today!

With that we have already reached the end of today’s ticker. At the end of the day we take another look at the exciting three-way battle between Ricciardo, Sainz and Norris in the first round on Sunday. And tomorrow we’ll get back to you as usual with a new ticker. Have a nice evening and see you then!

Wolff: History has no relevance

Mercedes has recently won seven world titles in a row. But Toto Wolff makes it clear on ‘Sky’: “If you are in such a tough championship, then the story has no relevance.” Past successes do not count in the current fight against Red Bull. According to Wolff, this also applies to the balance of power on the individual routes.

“Mexico has traditionally been a difficult course for us. But everything can change this season, because there were tracks where we were traditionally strong, but not this time – and vice versa,” said Wolff. So you have to approach it “race by race”. So it can also be positive for Mercedes that history doesn’t count in the world championship fight …

Why is Lewis wearing a mask?

Lewis Hamilton likes to surprise fans once. In this video he even puts on a special mask to give a group of children the surprise of a lifetime. Optically definitely an eye-catcher, and the message is of course also important: You want to show the children that anything is possible, says Hamilton. They definitely had a lot of fun!

This total of 600 million was apparently too much for the potential buyers.

The title fight between Mercedes and Red Bull could possibly be influenced by further engine penalties. The bulls are still optimistic. “Under normal circumstances we should be okay. But you never know,” says Christian Horner, who believes that the motors in the pool should actually get by “until the end of the year”.

And what about Mercedes? The Silver Arrows received a grid penalty in each of the past four races. Bottas was hit in Monza, Sochi and most recently in Austin, and Hamilton in Istanbul. When asked by ‘Sky’ whether this will continue in Mexico, Toto Wolff replied: “You are the first to be told!” Doesn’t sound like he’s convinced he’ll get away with impunity from now on …

… Michael Schumacher won his last sports car race. Together with Karl Wendlinger, he triumphed for Sauber-Mercedes in the 430-kilometer Autopolis race in Japan. From today’s perspective, it is hard to imagine that Schumacher would still be at the start in the World Sports Car Championship between the last two races of the Formula 1 season in Suzuka (October 20) and Adelaide (November 3)!

Times were different back then …

In the past twelve years, the team that won the Formula 1 drivers ‘title has always won the constructors’ championship. Those were Brawn (2009), Red Bull (2010 to 2013) and Mercedes (2014 and 2020). For the first time since 2008, this could change again this year. Ferrari was world champion at the time, but the driver’s title went to Lewis Hamilton (McLaren).

In general, it was the only time in this millennium (!) That this case occurred. Before that, you have to go back to 1999, when Mika Häkkinen (McLaren) became world champion, but the constructors’ title went to Ferrari. Although Max Verstappen is currently leading the drivers’ championship, Mercedes is ahead of the game when it comes to constructors.

Horner: It’s getting tight in Mexico too …

Historically, the circuit in Mexico is Red Bull’s place. Lewis Hamilton won the last Mexico Grand Prix to date in 2019. But in 2017 and 2018, Verstappen was ahead there. “Hopefully we’ll be strong there. Mexico has been a good track for us in the past – and so has Brazil,” remembers team principal Christian Horner.

Of course, that’s not a guarantee for the cops. “Almost every race was only one or two tenths [zwischen Mercedes und uns]. I don’t see any reason why it should be any different in Mexico, “said Horner. And Austin, of all places, could be a cautionary example, because the CoTA was actually always Mercedes-Land.

Nevertheless, Red Bull was ahead of the game there this year. Could it be the other way around in Mexico …?

Formula 1 sports director Ross Brawn is – like Nico Rosberg – enthusiastic about this year’s title duel. In his new column on ‘Formula1.com’ he writes: “We have two drivers who drive flawlessly. I don’t think we saw any mistakes – at least not a significant one.” This high level is “fantastic” for the championship.

For him, his driver of the day in Austin was Verstappen, “because Lewis put him under so much pressure.” Brawn praises the Dutchman for “controlling” the race in the closing stages and taking perfect care of his tires. “It was impressive that he didn’t make a mistake in 56 laps,” said Brawn.

What do you do between the races in Austin and Mexico? In the case of Williams, the time was used to pay a little visit to Miami! There, Formula 1 will drive on a street circuit around the Hard Rock Stadium for the first time in 2022. As a result, there is not much to see of the “Miami International Autodrome”, because of course it is a temporary race track.

Nevertheless, Russell has already organized a little “trackwalk” on the streets.

Red Bull: Verstappen was sick too!

We already know that Sergio Perez was sick in Austin. Now Helmut Marko reveals to his colleagues from ‘auto motor und sport’ that winner Max Verstappen was not fit either! Verstappen was “in poor health,” reports the Austrian and reveals: “In between, his eyes went completely black.”

“The performance of both is to be assessed even higher. Max has brought himself back into shape with breathing exercises and drinking,” says Marko. Indeed, the circumstances make his victory even more impressive!

In our driver grades, Monegasse in Austin earned a 1. And there is also praise from Ferrari team boss Mattia Binotto. “Charles drove a great race. He made no mistakes, drove fast, managed the tires and crossed the finish line almost 25 seconds ahead of Ricciardo,” said the team principal, who explained: “All in all, it was a great weekend for him . “

Thanks to Leclerc, Ferrari moved up to 3.5 points on McLaren in the constructors’ championship. This fight should also be really exciting!

Ocon: Knowing that we are slower than AlphaTauri

Apart from the title duel, there are also some exciting fights in the World Cup this year. Among other things, Alpine and AlphaTauri duel for P5 among the designers. The French are currently ten points ahead, but Ocon explains: “We know that we are not as fast as they are.” In the World Cup you are still ahead because you regularly manage to score points with both cars.

While Alpine made it into the top 10 with both drivers six times this year, AlphaTauri only managed to do so twice. “I think that made all the difference,” said Ocon. Ultimately, however, you have to concentrate on yourself anyway. “We can beat them on paper,” the Frenchman is convinced.

But of course you can’t allow yourself more zero numbers like the last one in Austin.

Norris: US fans even waited in front of the hotel

Because we’ve just talked about spectators on the track: They weren’t too short in Austin this year! Lando Norris explains that the mood was “similar to Silverstone”. “It was epic,” he enthuses and explains: “Things now feel a lot more normal and the way Formula 1 should be – with more guests, media representatives and VIPs back in the paddock.”

However, it must have been exhausting for him at the weekend in Austin, because: “[Die Fans] even waited for us at the hotel in the morning and in the evening. I don’t think they slept at all – or in the hotel lobby. “It was” crazy. “But he is pleased that Formula 1 is now so well received in the USA.

When it comes to Qatar, this photo series also comes to mind. In addition to Zandvoort and Saudi Arabia, the Losail International Circuit is one of three new courses in the 2021 calendar. Click through during your lunch break!

Qatar is hoping for full stands

At MotoGP, Qatar is struggling to get the grandstands full. One hopes that it will be different with Formula 1. “Of course we expect it to be full. Since we announced Formula 1, the demand has blown every scale,” reports Abdulrahman Al Mannai, President of the Qatar Motor and Motorcycle Federation, in an interview with the AFP.

With regard to the currently applicable Corona regulations in the country, he explains: “The current procedure in Qatar allows us to have 100 percent utilization as long as the visitors are vaccinated or have evidence of Covid-19 antibodies.” In theory, there is nothing in the way of a full house – at least in that respect. 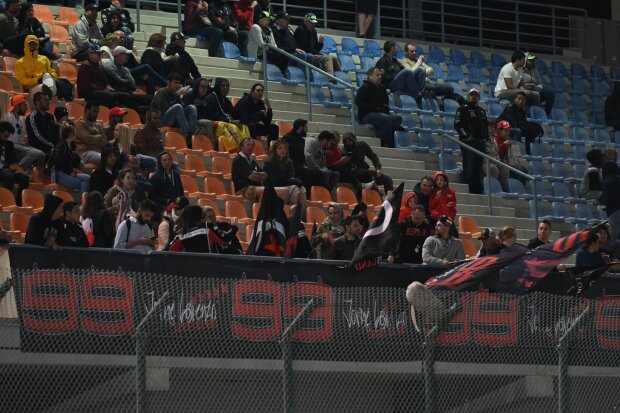