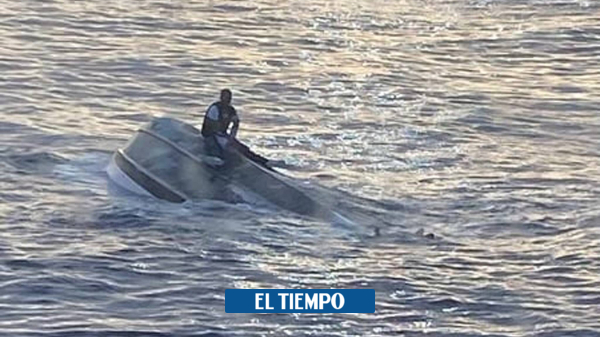 Shipwreck in Florida: who is the surviving Colombian Juan Montoya – USA – International

Juan Esteban Montoya, a 22-year-old Colombian, was the only survivor of a shipwreck what happened on the shores of Florida, U.S. The nationality was confirmed by the chain BBC Mundo, which reported that Montoya is from Guacarí, Valle del Cauca.

(In context: Coast Guard looking for 39 people after shipwreck in Florida waters)

The mother of the so far only survivor of the shipwreck that occurred over the weekend off the US East Coast said her son “held on to what was left of the boat, just as you can see in the photo.”

In total, 40 people were traveling on the boat. According to the authorities, 34 are still missing and five lifeless bodies were found. In addition, they announced on Thursday that they suspended the searches due to bad weather conditions.

photography of Montoya clinging to a part of the ship that was shipwrecked, he has traveled around the world.

In a statement to the Miami channel Telemundo 51, with her face covered, the mother, who was only identified as Marcia, revealed to the media that her 18-year-old daughter is also among the 39 disappeared, whom she already considers dead.

The woman explained that she has managed to speak by phone with her son, who is stable but remains hospitalized and in the custody of the United States immigration authorities.

(Read here: They rescued a girl and three adults who were lost in the San Andrés sea)

The story of Juan Montoya, a countryman from the municipality of #Guacari. Who in search of better opportunities for himself and his family in another country, embarked to achieve his dreams. Our commitment is and will be to work for those who need it most.https://t.co/iMtiCkQXW2

“I lived through hell,” the 22-year-old survivor told his mother, to whom he revealed that minors and even babies were in the boat that capsized on Sunday. José Hernández, a spokesman for the coast guard, told the channel that neither the survivor nor the other passengers were wearing life jackets.

The woman, who considers “a miracle” that her offspring survived the event, asked the US immigration authorities for “understanding.”

“That they understand a devastated mother, devastated by the loss of a daughter, that they please set him free, so that I can be his support and he can be my support. I need my son with me so that you can force me to continue,” the woman asked.

The coastguards have continued all night on Wednesday the search for the 38 disappeared due to the shipwreck, from which the lifeless body of a person has already been recovered.

According to the story of the only survivor, a total of 40 people were on the boat, which departed Saturday night from Bimini, in the Bahamas Islands and capsized due to bad weather and tidal waves.

(In other news: Tornado devastates dozens of homes and leaves several injured in Florida)

According to the Coast Guard, it could have been an immigrant smuggling trip and for the moment it has not disclosed the rest of the nationalities of those who were on the boat.

The agency, which is carrying out a search by sea and air, has warned that this operation “cannot continue forever,” as Captain Jo-Ann Burdian, commander of the Miami sector in the Coast Guard, said at a press conference on Wednesday.

The officer did not provide details about the person rescued or about the other occupants of the boat, nor about the identity of the deceased person out of respect for their “privacy and dignity”, according to what she said, and expressed her condolences to the families of the victims. of the shipwreck.

According to the authorities, it was a private ship that was sailing through the area, the “Signet Intruder”, which rescued the castaway on Tuesday, who was clinging to the keel of the 25-foot-long (7.6-meter) boat that it capsized about 40 miles (64 km) east of Fort Pierce Inlet.

As of Wednesday morning, an area in the sea equivalent to the area of ​​the state of New Jersey, which is 8,723 square miles (22,500 square km), had been tracked by air and sea.